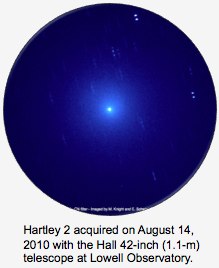 In one of its final mission trajectory correction maneuvers, the EPOXI mission spacecraft has refined its orbit, preparing it for the flyby of comet Hartley 2 on Nov. 4. The time of closest approach to the comet on that day is expected to be about 7:02 a.m. PDT.

A Nov. 3 trajectory correction maneuver began at 11 a.m. PDT, when the spacecraft burned its engines for 60 seconds, changing its velocity by 1.59 meters per second.

On Nov. 4, the spacecraft will fly past Hartley 2 at a distance of about 700 kilometers (435 miles). It will be only the fifth time in history that a spacecraft has been close enough to image a comet’s nucleus.

EPOXI is an extended mission that uses the already “in-flight” Deep Impact spacecraft to explore distinct celestial targets of opportunity. The name EPOXI itself is a combination of the names for the two extended mission components: the extrasolar planet observations, called Extrasolar Planet Observations and Characterization (EPOCh); and the flyby of comet Hartley 2, called the Deep Impact Extended Investigation (DIXI). The spacecraft will continue to be referred to as “Deep Impact.”

For more information about EPOXI, visit the mission website.

Click here see some spectacular video about the EPOXI/Hartley 2 encounter.