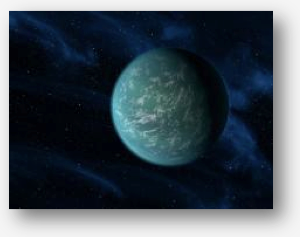 NASA’s Kepler mission has confirmed its first planet in the “habitable zone,” the region where liquid water could exist on a planet’s surface. Kepler has discovered more than 1,000 new planet candidates, nearly doubling its previously known count. Ten of these candidates are near-Earth-size and orbit in the habitable zone of their host star. Candidates require follow-up observations to verify they are planets.

These amazing discoveries are directly related to the NASA Explorer Schools featured lesson, Algebraic Equations: Transit Tracks — Finding Habitable Planets. During this activity, students analyze real NASA light curve data from the Kepler mission, then use algebra to calculate the size of the planets and distance from their star. Through this process, students discover if the planets lie in the “habitable zone.” To access this lesson, browse the Lesson Library at http://explorerschools.nasa.gov.
To read more about these exciting Kepler discoveries, visit the mission website.