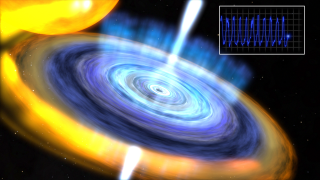 An international team of astronomers has identified a candidate for the smallest-known black hole by using data from NASA’s Rossi X-ray Timing Explorer. The evidence comes from a specific type of X-ray pattern, nicknamed a “heartbeat” because of its resemblance to an electrocardiogram. The pattern until now has been recorded in only one other black hole system.

This story directly relates to NASA Now: Black Holes in which Dr. Dan Patnaude discusses how NASA’s Chandra X-ray Observatory discovered the youngest nearby black hole. Preview this program at the NES YouTube Channel or watch it on the NASA Explorer Schools Virtual Campus.
For more video and information about this black hole discovery, visit https://www.nasa.gov/topics/universe/features/black-hole-heartbeat.html.