Skip to content
This week 25 years ago I got on a plane from Zurich to Chicago. I had sold my belongings in Switzerland, packed two suitcases, and shipped a few boxes of office supplies and books to Ann Arbor. I was excited to spend one or two years as a research fellow in the United States, improve my English, and then go back to Switzerland. I had a plan!
In part, I was trying to get away from personal problems and a complex family situation that had weighed on my spirit for years. I did not see eye to eye with my parents and especially not with my father, an evangelist and leader of a Christian fundamentalist church. He was a great man by all accounts, but I was a bitter disappointment to him – he had hoped I would take over his church as he got older. Be in the family business, so to say.
In part, I was pulled to the US to learn and explore new things. When getting on that plane that week, I could count on one hand all plane trips I had ever taken before. And, even though I did not know anything about the US, I was excited to jump in with both feet and learn. 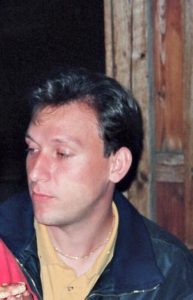 I am glad I did not know that day that my time in the US would exceed 25 years (not the 1-2 years I was planning), that I would find love and a new home and eventually build a new family. In fact, If someone told me what was going to happen as I got on that plane – about my family, my career as a researcher, a professor and as a leader at NASA – I would have ridiculed their assertions. The move would have been much much tougher: I know how to make a decision to move for 1 year, but not for 25 years.
I would have worried about the wrong things and ignored what is most important. It turns out I was successful here not because I achieved the goals I had that week 25 years ago, but because I found new goals I could not have even dreamt of.
So, as I look back on these 25 years, I have two conclusions:
First, I have an overwhelming sense of gratitude to all who helped me during these 25 years and especially to the United States and its citizens who over and over again surprised me with generosity and love and an open spirit. Yes, I know we are a complex country with important challenges. But, I have never regretted making this my new home! I am a direct manifestation of the dreams and hope that continue to build America.
Secondly, I think about the value of planning, and especially the usefulness (or lack thereof!) of long-term plans. Whether it is career planning or long term life plans – overarching values matter, planning is good, but plans are useless because they miss one major ingredient: at a given time – and especially when we are young – we cannot even imagine all the possibilities that we will learn about later. Life is so much more surprising and richer than we can ever guess!
No, we do not need a long term plan for a happy and successful life. Instead, we need big leaps of faith and great people who support and love us along the way, whom we can support and love in return!
Thanks to all of you who have been and continue to be part of my adventure!