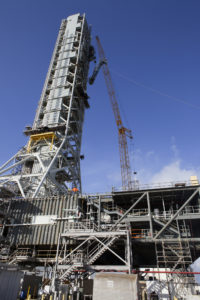 The Core Stage Forward Skirt Umbilical (CSFSU) recently was installed on the tower of the mobile launcher at NASA’s Kennedy Space Center in Florida, to prepare for the first launch of the agency’s Space Launch System (SLS) rocket with the Orion spacecraft atop.

The mobile launcher tower will be equipped with a number of lines, called umbilicals, which will connect to the SLS and Orion spacecraft and provide commodities during processing and preparation for launch of Exploration Mission-1.

The Ground Systems Development and Operations Program is overseeing installation of the umbilicals on the tower.