The team that tested the umbilical lines and launch accessories that will connect from the mobile launcher (ML) to NASA’s Space Launch System (SLS) rocket and Orion spacecraft for Exploration Mission-1 celebrated their achievement during a banner signing at the Launch Equipment Test Facility (LETF) at the agency’s Kennedy Space Center in Florida.

Engineers and technicians in the Engineering Directorate and the Exploration Ground Systems Program, along with contractor support, began the tests at the LETF about 2.5 years ago. The first to be tested was one of two aft skirt electrical umbilicals. Testing of the final umbilical, the second of two tail service mast umbilicals, was completed on June 27.

“The team of NASA test engineers and test managers, and contractor engineers and technicians, worked tirelessly six days a week, 10 hours a day, in order to meet the highly aggressive schedule and deliver the hardware to the mobile launcher for installation,” said Jeff Crisafulli, Test and Design branch chief in the Engineering Directorate.

In all, 21 umbilicals and launch accessories were tested on various simulators at the LETF that mimicked conditions during launch to ensure they are functioning properly and ready for installation on the ML. Most have been delivered and installed on the ML tower. These include the Orion service module umbilical, interim cryogenic propulsion stage umbilical, core stage forward skirt umbilical and core stage inter-tank umbilical. Two aft skirt electrical umbilicals, two aft skirt purge umbilicals, a vehicle stabilizer system, eight vehicle support posts and two tail service mast umbilicals were installed on the 0-level deck of the ML.

Before launch, the umbilical lines will provide power, communications, coolant and fuel to the rocket and spacecraft. Additional accessories will provide access and stabilization. During launch, each umbilical and accessory will release from its connection point, allowing the SLS and Orion to lift off safely from the launch pad.

“Design, fabrication and testing of the new mobile launcher’s umbilicals and launch accessories is a once-in-a-lifetime opportunity that I am proud to have been part of,” Crisafulli said. 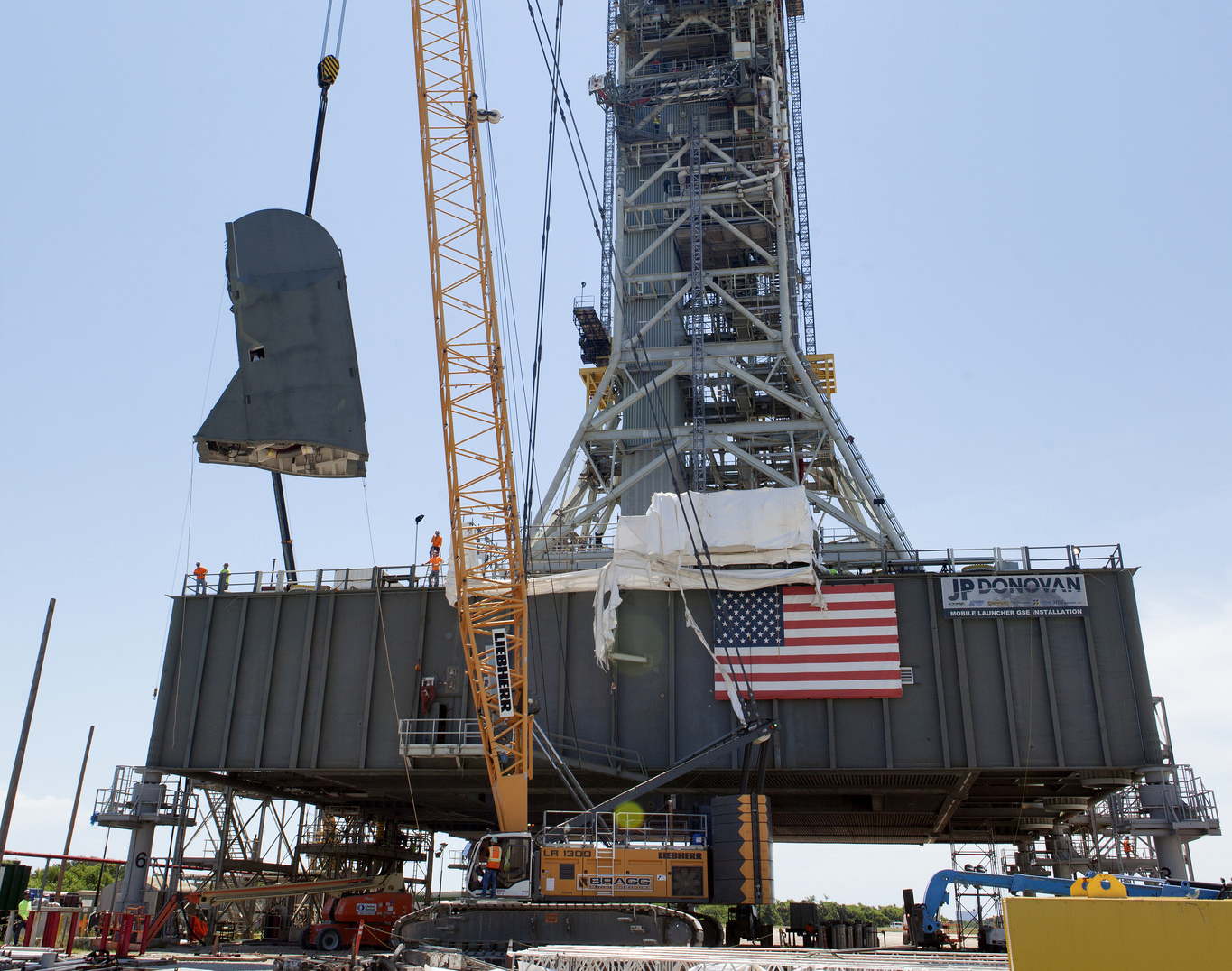 The first of two 35-foot-tall Tail Service Mast Umbilicals (TSMU) was lifted up and installed on the 0-level deck of the mobile launcher at NASA’s Kennedy Space Center in Florida. The installation brings the Exploration Ground Systems Program one step closer to supporting prelaunch operations for the agency’s Space Launch System (SLS) rocket and Orion spacecraft on Exploration Mission-1.

The TSMUs will connect to the SLS rocket core stage aft section and provide liquid oxygen and liquid hydrogen fluid lines and electrical cable connections to the core stage engine section to support propellant handling during prelaunch operations. This TSMU will provide the liquid oxygen.

Before launch, the TSMUs will tilt back to ensure a safe disconnect and retraction of all umbilical hardware away from the rocket during liftoff.

Exploration Ground Systems (EGS) chilled out recently with a pressurization test of the liquid oxygen (LO2) tank at Launch Pad 39B at NASA’s Kennedy Space Center in Florida – Pad 39B, recently upgraded by the EGS team for the agency’s new Space Launch System rocket.

The six-hour test of the giant sphere checked for leaks in the cryogenic pipes leading from the tank to the block valves, the liquid oxygen sensing cabinet, and new vaporizers recently installed on the tank.

The SLS will use both liquid oxygen and liquid hydrogen. During tanking, some of the liquid oxygen, stored at minus 297 degrees Fahrenheit, boils off and vapor or mist is visible. While the tank can hold up to 900,000 gallons of liquid oxygen; during the test it only contained 590,000 gallons of the super-cooled propellant.

The test was monitored by engineers and technicians inside Firing Room 1 at the Launch Control Center, a heritage KSC facility also upgraded by the EGS team in preparation for the upcoming mission. Results of the test confirmed that the fill rise rate was acceptable, the tank pressurization sequence works and that only one of the two vaporizers was needed to accomplish pressurization.

Another system is “go” for the first integrated launch of SLS and the Orion spacecraft!