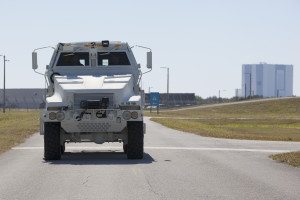 NASA’s Kennedy Space Center in Florida received another work platform that will be used to modernize the massive Vehicle Assembly Building (VAB), which is where the agency will test and process the SLS for flight before it is rolled out onto the launch pad. The agency’s Ground Systems Development and Operations (GSDO) Program at Kennedy continues to make progress preparing the center to launch NASA’s Space Launch System (SLS) rocket and Orion spacecraft that will take humans beyond Earth orbit and on to deep space.

The arrival of the second half of the G-level work platforms at Kennedy brings the total to eight platforms, or four levels of work platforms being readied for the VAB. The G platforms are the fourth of 10 levels of platforms that will support processing of the SLS rocket and Orion spacecraft for deep space missions including to an asteroid and the journey to Mars.

A total of 10 levels of new platforms, 20 platform halves altogether, will be used to access, test and process the SLS rocket and Orion spacecraft in High Bay 3. In addition, 20 new elevator landings and access ways are being constructed for the platform levels. The high bay also will accommodate the 355-foot-tall mobile launcher tower that will carry the rocket and spacecraft atop the crawler-transporter to Launch Pad 39B.

The platforms are being fabricated by Steel LLC of Scottdale, Georgia, and assembled by Sauer. The GSDO team at Kennedy is overseeing upgrades and modifications to the high bay to prepare for NASA’s deep space exploration missions.

The first three sets of platforms, H, J and K, were delivered to the center last year.