By now, if you are a follower of this blog or just a follower of the International Space Station, you are familiar with the tremendous international effort it took to assemble this laboratory in orbit and bring its facilities up to their full potential. The contributions of 15 nations over the last decade have resulted in this unique resource with its access to the microgravity environment, stable viewpoints of Earth and space, as well as access to the orbital environment—namely radiation and the vacuum of space. But what does the cooperative environment that went into building the station mean for the long term science prospects that are now ramping up to their full potential?

The space station has become a scientific melting pot. Similar to the benefits that immigration brought to North America during the industrial revolution, the station is poised to provide benefits to the scientific community and any young pioneers willing to take up the challenge to use this outpost on the frontier of space. The station is also a U.S. National Laboratory, with research facilities that support human biomedical research, animal and plant physiology, materials science, fluid and combustion physics, remote Earth observations, and advanced engineering and technology demonstrations, side-by-side-by-side.

This multidisciplinary research facility presents a rare opportunity for researchers. The dedicated research facility is still much more common than the multidisciplinary facility, typically limiting researchers to just one field of scientific investigation.   Aboard station the experiments from these vastly different fields literally run right next to one another. The astronauts who make many of these investigations possible often have different scientific backgrounds from the principal investigators they are working with on the ground. This opens the potential for dialogue and insights as the studies progress.

The spirit of cooperation that was required in building the space station is still very much evident  today. Different investigations on board may cooperatively share equipment to accomplish their research objectives, minimizing the cost and mass to launch and maximizing the use of in-orbit resources.

One such example of resource sharing that is possible aboard station is in the sharing of camera equipment and software for the Binary Colloid Alloy Test (BCAT) and the Earth Knowledge Acquired by Middle School Students (EarthKAM). BCAT is a set of fluid physics experiments to examine the traits of super-critical fluids and phase separation of fluids. Meanwhile, EarthKAM is an educational outreach study focusing on remote Earth observation and using the capabilities of the EarthKAM camera to engage students, teachers and researchers in collaborative investigations. These two studies may seem worlds apart, but it is because the BCAT investigation is able to use the automated EarthKAM camera and software that BCAT was able to run many samples without requiring an undue amount of crew time. 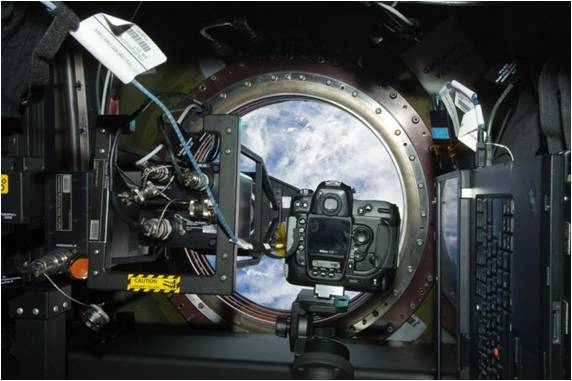 EarthKAM equipment set up for a view of the Earth from the orbital perspective of the International Space Station. (NASA)

So why is multidisciplinary research a good thing to promote? For one thing, it often leads to innovation. The explanation for this is something we’ve all experienced from time to time. It’s much like when you get stuck on a problem. You can stare at it for hour upon hour and just not see the solution. Yet if the right friend happens along, they might see something you’ve been missing and the problem is solved in next to no time. Frustrating, sure, but sometimes a different perspective is all that is needed to reach a breakthrough.

Multidisciplinary science tries to capitalize on the benefits of having different scientific backgrounds engage and become part of the solution to a complex problem. Admittedly, a physicist and a biologist may look at a problem and see vastly different solutions, but when multiple disciplines and multiple participants work together to solve the same problem it opens the doorway to true innovation.

A great recent example is the interaction between the BCAT-6 principal investigator Matthew Lynch and Expedition 30 crew member Don Pettit. Lynch and Pettit worked together to achieve a more detailed image of the BCAT phase separation sample. Pettit suggested using a laser pointer source on orbit to attempt to reveal any diffraction—when light bends around an object—patterns that showed the structures and phase separation characteristics they were looking for. It worked! Innovation was born at the intersection of fluid physics, optical physics and chemical engineering.

Concept for how diffraction patterns can be detected from suspensions of colloidal particles. Irregular diffraction patterns result from irregular particle spacing, however, the presence of the pattern allows you to know when the colloidal particle groups are within the field of the camera. (Illustration by O.M. Yetfanov. Used with permission Journal of Biotechnology/A.P. Mancuso, O.M. Yetfanov, et. al.,)

Co-location is another obvious advantage of the station as a research platform. To date there have been several investigations directed at in-house resource production, such as Tomatosphere, which run in the LADA greenhouse and the Biomass Production System (BPS), to name a few. Additionally there have been multiple experiments designed to help better understand the burning of fuels in the Combustion Integrate Rack (CIR) and the Microgravity Science Glovebox (MSG), like the FLEX-2, SPICE and SLICE investigations. As a result of such studies, crew members may someday grow their own fruits and vegetables to eat or be able to fuel up the engines of the future. 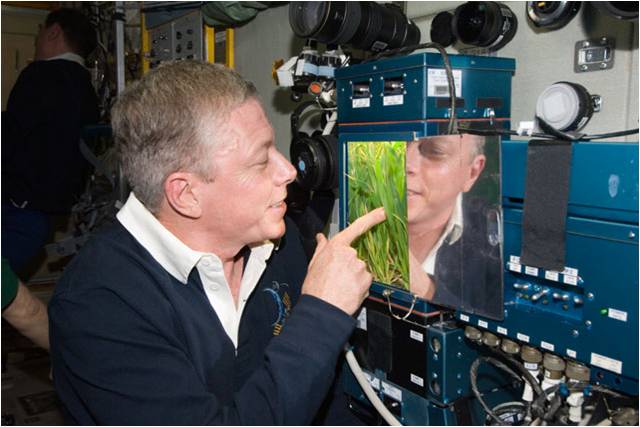 When multidisciplinary science is brought into this picture, you can envision not only growing food aboard station, but processing those plants into biofuel and then testing its combustion capabilities. The context evolves into a larger study of in-orbit biofuel suitability. In fact, just because these resources are all available on station, researchers can propose new multidisciplinary studies to spur on scientific innovation. 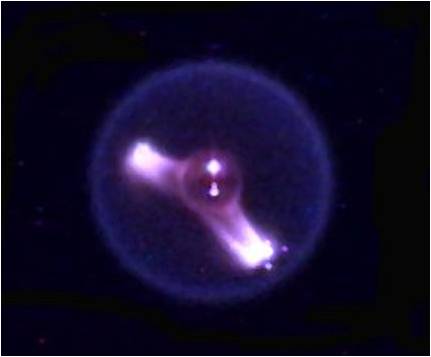 A burning heptane droplet during the FLEX investigation on the International Space Station. (NASA)

Another sign of the multidisciplinary research potential on station is the transformation of the American Society for Gravitational and Space Biology (ASGSB) into the American Society for Gravitational and Space Research (ASGSR). At the first ever ASGSR Annual meeting, held in December in New Orleans, researchers and students from a wide range of physical and biological sciences came together to discuss the possibilities and challenges of reduced gravity studies. The opportunity was an enlightening one for scientists in previously separated disciplines to come together and share information on their research programs, including many of the active areas of research done aboard station.

With collaborative efforts like these, the multidisciplinary research potential of the International Spaces Station is already being tapped. It will be exciting to see what discoveries will result from our orbiting, scientific melting pot in the years to come.

Kirt Costello completed a Ph.D. in Space Physics and Astronomy in 1998. While at Rice University, Costello worked on a magnetospheric forecast model used to predict the magnetic field response at the Earth’s surface based on upstream solar wind data. The model was used as a primary forecast model in this field at the Space Environment Center in Boulder, Colo., from 1997-2011. Since 2000, Costello has worked at NASA’s Johnson Space Center as a Thermal and Electrical Power Crew training instructor, as an International Space Station Training Lead, and as a group lead in the Mission Operations Directorate Operations Division. Kirt is now the Assistant International Space Station Program Scientist for National Research. In this position he works with the ISS Program Scientist to advise the ISS Program Manager on the objectives and priorities of science being prepared to fly to the space station.

One thought on “The International Space Station: Scientific Melting Pot”