In today’s blog, Dr. Sara Zwart shares with thereaders of A Lab Aloft her thoughts and experiences as a scientist, includinghow sometimes data showing nothing can actually indicate something!

It’salways exciting to make new scientific discoveries. But though it may soundcounter intuitive, sometimes it can be just as important to find nothing. When looking at researchresults, a lack of change can actually indicate that you have found something, which can lead tounanticipated, but amazing discoveries. This has happened twice in the pastyear at NASA’s Nutritional Biochemistry Laboratory as part of the NutritionalStatus Assessment experiment, or Nutrition.

Thegoal of the Nutrition study is to understand what changes in an astronaut’shealth while they live aboard the International Space Station. Improvedknowledge in how humans react to living in space for long durations can helpprepare NASA for future exploration to Mars, as well as help in understanding howwell current efforts to counteract the negative effects of microgravity work.These countermeasures include exercise and a carefully planned diet, among otherthings.

Forthis study, astronauts collect blood and urine samples during flight, as well onthe ground during the routine pre- and postflight testing. Before they fly, crewmembers train on how to take blood from each other or from themselves, and theyalso can practice collecting urine, which can be tricky in microgravity! 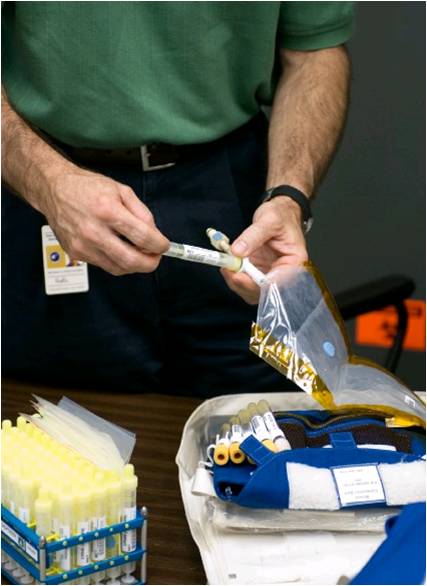 Groundtraining helps to prepare the crew for sample collection for the NutritionalStatus Assessment experiment, or Nutrition. (NASA Image JSC2006E27274)

Uponreturn to Earth, crew member samples are analyzed for a broad range ofchemicals and biochemicals, from nutrients to bone and muscle markers tohormones and other compounds. One of the nutrients we study is vitamin K, whichis a crucial vitamin for blood clotting, and it also has an important role in maintainingbone health.

Earlystudies from the space station Mir provided evidence that vitamin K status maybe lower during space flight, and researchers suggested that vitamin K shouldbe investigated as a potential countermeasure for bone loss. Those earlystudies on Mir involved only one or two crew members, and a food system differentfrom the one we use today on station.

Acrew member works with test samples in the Human Research Facility 2 (HRF-2)Refrigerated Centrifuge as a part of the Nutritional Status Assessment(Nutrition) experiment in the Columbus laboratory of the International SpaceStation. (Credit: NASA)

ForNutrition, we measured vitamin K status from markers in the blood and urine in15 station crew members at five different time points during their mission. Wefound no evidence for decrements in vitamin K status. In other words, vitamin Kis still important for health, blood and bones, but there is no evidence thatmore would be better.

Thesetypes of “negative” findings are important. In this case, we learned that thecurrent space food system is sufficient to maintain vitamin K status inastronauts. What’s further, at this time there is no basis for recommendingvitamin K supplements to prevent bone loss that occurs during space flight.

Hormonescan be measured in the crew’s blood and urine samples, providing valuableinformation on a number of the body’s systems. One hormone that we measured aspart of the Nutrition study was testosterone. This is an important hormone inthe body for building up and maintaining bone and muscle mass.

Someearlier studies suggested that there may be lower levels of testosterone inastronauts during space flight, which may contribute to some of the observed boneand muscle loss. As part of this study, we measured the blood levels of testosteroneat five different time points during space flight to test this hypothesis.Again, 15 station crew members provided samples, however the analysis showedthat no changes to testosterone occurred during flight.

Oncemore, these negative findings provided important information in working tounderstand how the human body adapts to microgravity exposure. This is especiallytrue when we consider ways to counteract some of the known negative effects ofweightlessness, including bone and muscle loss. By narrowing the causes ofthese concerns to human health in space, we get closer to identifying the rootcauses and providing significant countermeasures.

Sara Zwart, Ph.D., and hercolleague Scott Smith, Ph.D., lead NASA’s Nutritional Biochemistry Lab atJohnson Space Center. The testosterone research discussed above was publishedin the Journal of ClinicalEndocrinology and Metabolism (epub:doi:10.1210/jc.2011-2233), and the vitamin K work was published in the Journalof Bone and Mineral Research (26:948-54,2011). In addition to ground-research studies, Zwart and Smith lead two spacestation experiments, NutritionalStatus Assessment and ProK, in which they investigate the roles of animal protein and potassium inmitigating bone loss.

One thought on “When Finding Nothing Means Discovering Something”