In today’s post, guestblogger Abigail Harrison—aka, Astronaut Abby—shares her dreams of a career asan astronaut and the exciting ways she’s found to work towards her goal withthe readers of A Lab Aloft.

Myname is Abigail Harrison and I am a 14-year-old aspiring astronaut from Minneapolis,Minn. I have wanted to be an astronaut since I was 7 years old. For the pastcouple of years I have been working to make my dreams a reality and sharing myexperiences through my blog, www.astronautabby.com.I hope to someday be the first person to walk on Mars.

Recently,I witnessed a mind-blowing NASA education event that took place last August atthe Northern Star Boy Scout Council’s Base Camp facility at Fort Snelling, Minn.I was lucky enough to watch an InternationalSpace Station downlink, which is a live video connection between theastronauts aboard the space station and students here on Earth. Participantsasked the crew questions about food, living and working conditions, and thescience done in space. The astronauts spoke highly of their internationalcompatriots and I was really inspired by the cooperation between everyoneaboard. 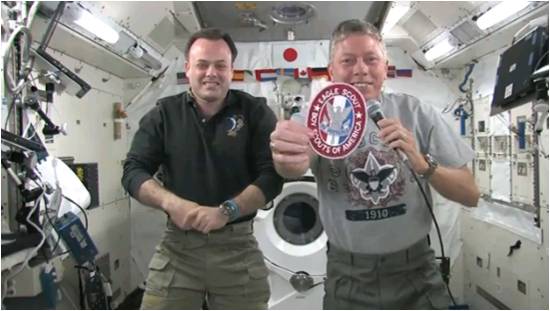 Whileattending this live downlink, I was amazed that there were nearly 400 kids in theaudience. Seeing the wonder on the many young faces as astronauts, who were simultaneouslyorbiting the Earth, answered their questions was phenomenal. I truly believethat moments like this can change lives, as it did for myself and likely everystudent in that room.

Seeinginstances of awe like I did at the downlink motivates me to pursue my own dreamof being an astronaut. I hope that I can someday inspire others, too. Myfriends, who were with me, were likewise motivated—not to be astronauts, asthat’s not their dream, but to be great in their own chosen paths, such ascardiovascular surgery, paleontology and mathematics. Whatever goal you have,it feels so much closer to coming true when you experience others living theirdreams in reality, like the crew is doing in space. It’s amazing!

Iknow that NASA has made a profound impact on me. I work harder in school sothat I can follow my aeronautic ambition. Although not everyone is interestedin a career in aerospace, NASA is still a great inspiration for almost anyone. Theiremployees demonstrate a high work ethic and determination to get the job done.They are incredible role models. 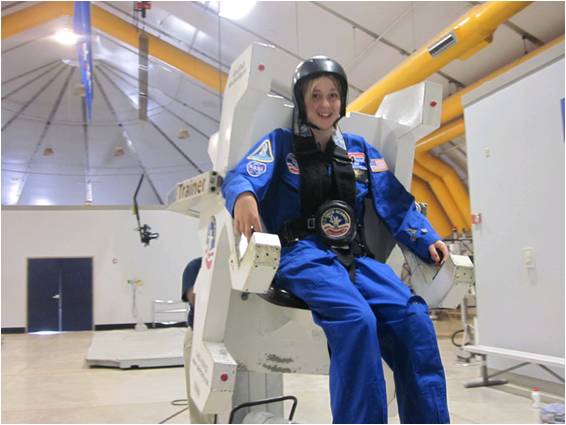 AbigailHarrison takes a test drive in a model of the Manned Maneuvering Unit, or MMU, as part of her experience at Space Camp at the U.S. Space and Rocket Center in Huntsville, Ala. in 2011.
(Credit: www.astronautabby.com)

Throughmy own experiences with my blog and my twitter account—@astronautabby—I have found thatthe people who work with NASA tend to be very helpful to fans like me. I thinkthis is part of what makes NASA so great, their community outreach. Theemployees are truly interested in encouraging students to find a desire tolearn. One example I have of amazing NASA employees is Susan Freeman, a spacestation engineer whom I met on Twitter. She was a tremendous help to me on ahistory day project, providing me with a personal phone interview.

Eversince I started my blog, nearly a year and a half ago, I have received commentsand messages from kids throughout the country and around the world. Many of themexpress similar interests to mine: science, math, engineering and astronomy,with a common goal of space travel. The international comments that I receiveoften consist of congratulations on my dreams and a reminder of how fortunate Iam to be a part of a culture where math, science and space travel are so highlyregarded and encouraged.

Weare lucky to live in a country with a space program that focuses on not onlyexploring space, but also on educating our youth. I agree whole-heartedly withall of these students in that we are incredibly fortunate that NASA providesthe amazing opportunities and learning experiences that it does. Some of theseprograms are ones that I have participated in. These include, but not limitedto Space Camp, high altitude ballooning and the space station live downlink. 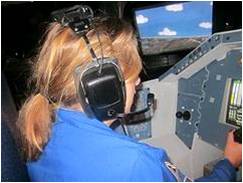 AbigailHarrison simulates landing the space shuttle at Space Camp at the U.S. Space and Rocket Center in Huntsville, Ala. in 2011.
(Credit: www.astronautabby.com)

Tolocate programs like these near you, you can check out NASA’s Website, the newspaper, your school orany science groups such as a museum or robotics group near you. Gettinginvolved in NASA programs is a great step, but there are also a lot of otherinteresting science and aerospace groups out there. A couple of my favorites include:

Onemore way that you can get connected is online, much like I am doing right now.Blogging and tweeting is a great way to connect with scientists and studentsall over the world. For instance, if you want to learn more about the researchand technology done on the space station, you can follow their Twitter account:@ISS_Research. It doesn’t takevery much time and is an easy way to build a network of people who can answerany questions you might have.

NASAand the space station provide inspiration to people everyday. NASA is a hugesupporter of education and continues to advance our society by motivating andencouraging kids to continue becoming scientists, engineers and inventers. Sowhy miss out on all the exciting opportunities they have to offer? Go for itand get involved! Follow your dream and it just might take you to the stars. 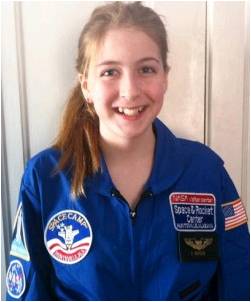 Abigail Harrison is ateen who hopes to someday be an astronaut. She enjoys math and science andparticipates in Girls in Engineering Math and Science, or GEMS. She is also amember of her school’s first-ranked Science Bowl team and of the MinnesotaAstronomical Society. Abigail has a blog called AstronautAbby, which she usesto share her love of aeronautics with others.

7 thoughts on “Meet a Teen with Space Dreams”