A Lab Aloft is pleased to republish a recent blog entry from NASA Astronaut Don Pettit. He is currently living aboard the International Space Station and conducting research on the orbiting laboratory. We hope you will enjoy his unique perspective on science in the frontier of space!

The International Space Station was conceived and constructed through the cooperation of fifteen nations. Now, with its construction complete, we can focus on how best to use it.

We have built a laboratory located on the premier frontier of our era. Our Earth-honed intuition no longer applies in this orbital environment. On frontiers, things do not behave the way we think they should, and our preconceived notions are altered by observations. That makes it rich in potential for discovery. The answers are not in the back of the book, and sometimes even the questions themselves may not be known. 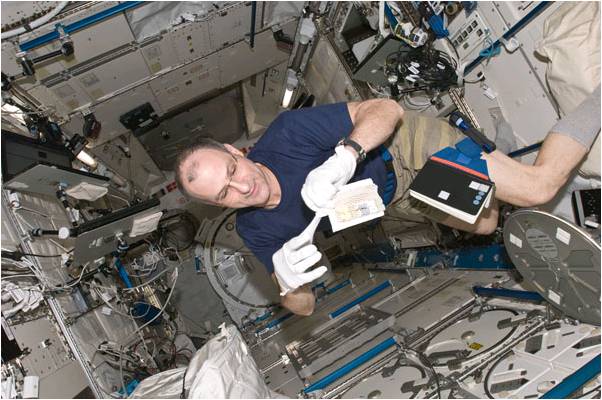 Getting ready to insert biological samples in the Minus Eighty Laboratory Freezer for ISS (MELFI-1) in the Kibo lab.

On the Station we can use reduced gravity as an experimental variable for long periods of time. We have access to high vacuum, at enormous pumping rates. (The rate at which space can suck away gas, hence its ability to provide a region devoid of molecules, far outpaces anything we can do on Earth.) We are beyond the majority of our atmosphere, which lets us touch the near-space environment where solar wind, cosmic rays, and atomic oxygen abound. Such cosmic detritus, unavailable for study within our atmosphere, holds some answers to the construction of our universe and how our small planet fits into the picture.

The Station as a laboratory offers most of the features that Earth-borne laboratories have, including a good selection of experimental equipment, supplies, and a well-characterized environment (temperature, pressure, humidity, gas composition, etc.). There is generous electric power, high data-rate communications, significant crew work hours (the fraction of hours spent on science per crew day on Space Station is commensurate with the fraction for other science frontiers such as Antarctica and the deep ocean), and extended observational periods ranging from weeks to years. All this is conducted with a healthy blend of robots and humans, working together hand-in-end-effector, each contributing what each does best. Only on Earth is there a perceived friction between robots and humans.

In this orbital laboratory, we can iterate experimental procedures. We can try something, fail, go back to our chalk board, think, (we now have the time for this luxury) and try it all over again. We can iterate on the iteration. We now have continuous human presence, and time to see the unexpected and act upon it in unplanned ways. Sometimes these odd observations become the basis for studies totally different from those originally planned; sometimes those studies prove to be more valuable. And on this frontier the questions and answers mold each other in Yin-Yang fashion until reaching a natural endpoint or the funding runs out, whichever comes first. This is science at its best, and now, for the first time, we have a laboratory in space that allows us to do research in a way comparable to how we do it on Earth.

So what questions are ripe for study on the Station? What possible areas of research might bear fruit? We have a few ideas.

One area is the study of life on Earth. Life has survived for billions of years, during which temperatures, pressures, chemical potentials, radiation, and other factors have varied widely. Life always adapts and (mostly) survives. Yet there is one parameter that has remained constant for billions of years, as if our planet was the most tender of incubators. Now for the first time in the evolution of life, we humans can systematically tweak the gravity knob and probe its effect on living creatures. And we can change the magnitude of gravity by a factor of one million. Try changing other life-giving parameters, perhaps temperature, by a factor of one million and see how long it takes a hapless life form to shrivel up and die! The fact that gravity can be changed by many orders of magnitude and life can continue is, in itself, an amazing discovery. So now we have a laboratory to probe in-depth the effects of microgravity on living organisms.

The discovery of fire (or rather its harnessing) was a significant advance that allowed humans to transcend what we were to become what we are now. Well before Galileo and Newton dissected the basic formulations of gravity, humans intuitively understood that heat rises. We empirically learned how to fan the flames. But fire as we know it on Earth requires gravity. Without gravity-driven convection, it will consume its local supply of oxygen and snuff itself out as effectively as if smothered by a fire extinguisher. Questions about fire (up here we prefer the term “combustion”) are ripe for a place where we can tinker with the gravity knob.

Another invention, the wheel, literally carried us into the Industrial Age. Ironically, that particular tool is rendered obsolete on a frontier where one can move the heaviest of burdens with a small push of the fingertips. In space the problem is not how to move an object, but how to make it stay put. Perhaps the invention of the bungee cord and Velcro will be the space-equivalent to the development of the wheel on Earth. Such shifts in thought and perspective, some seemingly minor, happen when you observe the commonplace in a new and unfamiliar setting.

We are now told that we may only be seeing about 4 percent of the stuff that our universe is made of (which raises the question, what is the other 96 percent?). Some questions about fundamental physics can only be made outside our atmosphere or away from the effects of gravity. The International Space Station, contaminated with human-induced vibrations, may not be the ideal platform for these observations, but it is currently in orbit and is available to be used. Many of these experiments are like remora fish, latching onto an opportune shark for a sure ride instead of waiting for the ideal shark to swim by. And we pesky humans, even though we cause vibration, occasionally come in handy when some unexpected problem requires a tweak, a wrench, or simply a swift kick.

Although we have preconceived ideas about how the International Space Station can be utilized, benefits of an unquantifiable nature will slowly emerge and probably will be recognized only in hindsight. The Station offers us perspective; it allows us to question how humans behave on this planet in ways that you can’t when you live there.

Don Pettit holds a bachelor of science degree in chemical engineering from Oregon State University and a doctorate in chemical engineering from the University of Arizona. He was selected by NASA as an astronaut in 1996. He is a veteran of three spaceflights and is currently aboard the International Space Station  as part of the Expedition 30/31 crew. Pettit is scheduled to live and work aboard the station until May 2012.

2 thoughts on “A Lab for Science, and for Thinking”