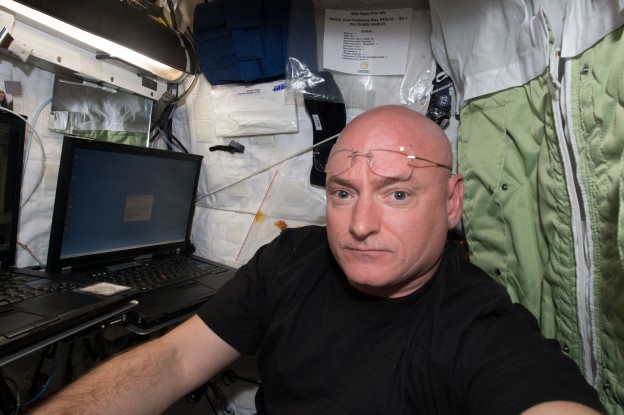 In today’s A Lab Aloft, Graham Scott, Ph.D., kicks off a two-part series looking at the National Space Biomedical Research Institute’s (NSBRI’s) and NASA’s Twins Study that is conducting biomedical research on a pair of identical twin brothers, who are both astronauts.

In an effort to address the age-old question of “nature versus nurture,” the NASA and the National Space Biomedical Research Institute (NSBRI) funded Twins Study is conducting biomedical research on the Kelly brothers—identical twin astronauts. This first of its kind integrated “astro-omics” study will lay the foundations for the eventual development of precision medicine-based countermeasures for astronauts that may contribute to future missions to Mars. Spaceflight challenges humans in new, unexpected and extreme ways, and people on and off the ground will undoubtedly benefit from the knowledge obtained as a result of this unique investigation.

The origins of this research are also personal. The twins themselves, Mark and Scott Kelly, raised the idea that they be studied before, during, and after Scott’s current one year mission aboard the International Space Station. Scott is one of two selected crew members who will spend a full 12 months on orbit, rather than the usual six months. Meanwhile his brother Mark, a retired astronaut, remains firmly on the ground.

The Twins Study dovetails seamlessly with the one-year mission, creating an opportunity to take a detailed look at Scott’s DNA, his complement of proteins, the ensemble of bacteria living in his gut, and the milieu of metabolites found in his bloodstream. We call this type of research—where we simultaneously look at many different biomolecular levels—an integrated omics study.

The term “omics” is relatively new. In 2003 the first “finished” human genome, which detailed the genetic make-up or blueprint of a person, became broadly available to the scientific community. This led to an observation of how genes are copied or “transcribed” ahead of ultimately being synthesized into proteins, which we refer to as the transcriptome. This work was quickly followed by efforts to study the proteome, cataloging the thousands of proteins that are circulating at any given time in our blood or performing signaling within our cells. More recently we have characterized the microbiome, which refers to the community of microorganisms living within our gut and on our skin. We also are studying the epigenome, which involves investigating reversible chemical changes that occur dynamically within our DNA and the histone proteins that “package” our DNA as a result of environmental stressors. The number of “omes” that we can examine seems to continually increase and the term “omics” is an umbrella term to cover these areas of molecular research as a newly emerged category of biomedical study.

The opportunity to observe Scott (in space) and Mark (on the ground) at a fundamental biomolecular level is unique because they are identical twin brother astronauts. Around the turn of the 21st century we would have stated that they were genetically the same. Actually, it turns out that identical twins are not 100 percent identical. To a first order of approximation their DNA sequence is matched, but there are actually some small underlying genetic differences. Moreover, the biomolecules that are generated or “expressed” at the RNA, protein, and metabolite levels are quite different. This is due to the responses of each twin to the environment that they encounter at any given moment, as well as the experiences that have accumulated throughout their lifetimes.

We plan to look at both Mark and Scott’s molecular profiles at a fine, granular-level to see what is occurring with their genomes, transcriptomes, proteomes, metabolomes, etc. in space, relative to on the ground. Mark provides about as ideal of a control subject as one could imagine, because he is so close genetically to Scott. Starting in late 2014 we have been collecting biofluids and obtaining baseline measurements from Scott and Mark for the study. We will continue to collect samples from both twins following Scott’s return to Earth in early 2016.

What we may see with Scott, based on experiments previously performed using animal research models, are different RNA expression levels for certain genes, relative to what we typically observe on the ground. We can also perform a comparison of Scott’s RNA expression profile to that of his brother, Mark. For instance, during his mission Scott will experience approximately 20 times higher levels of radiation than Mark. This is because the combined effect of our planet’s protective atmosphere and strong magnetic field protects Earth-bound humans.

The impact that space radiation has on a person’s DNA is one of the things we’re interested in learning more about. We will study how rapidly the ends of the chromosomes or “telomeres” shorten in response to the effects of radiation and other stressors that are inherent to the space environment. This research on telomeres will provide follow-up data to the chromosomal damage published in 2008 by Dr. Francis Cucinotta and colleagues in Radiation Research.

A better understanding of the impact of space radiation at the molecular level may ultimately benefit cancer patients who undergo proton radiation as part of their treatment regimen. Up until the 21st century, cancer patients received radiation treatments that were quite different from what astronauts are bombarded with in space. Now many leading cancer hospitals are using proton therapy and some are even beginning to employ carbon ions to fight cancer. This “particle therapy” is similar to the heavy particle component of space radiation, though with varied rates and doses.

This higher radiation exposure Scott will experience in space may reveal biomolecular impacts in ways that could lead to new findings. The twins close genetics make them ideal study subjects for attempting to tease out the role of environmental effects in disease development, versus the inherent genetic makeup of a person.

We factored into the studies that Mark was an astronaut up until 2012, meaning he also spent a significant amount of time in space. Mark has spent 54 days in space, while Scott will accumulate 540 days on orbit by the end of his one-year mission—ten times as many days as his brother. Both of the brothers’ biomolecular profiles have almost certainly been impacted by their previous experience in space. Scott will of course encounter a new set of stressors, now that he is once again aboard the ISS.

As with many scientific projects, the Twins Study is likely to raise more questions than answers. That said, we hope to have many tantalizing leads and interesting pieces of data to follow up on with more integrated omics research on larger numbers of astronauts.

To baseline the biomolecular profiles of both Scott and Mark, we obtained and safely stored blood, urine, saliva, and other biofluid samples. We also are performing a longitudinal study on Scott, by collecting samples while he was on Earth prior to launch, then following him throughout his space mission and again periodically for many months after his return. The same goes for Mark; we will perform a similar longitudinal study on him. For both twin astronaut brothers we will track them over time, specifically for several years. In fact we will be looking at Scott’s telomeres, as far out as 720 days after his landing in March 2016.

The results of this study won’t just impact the twins, but actually will have a lot to do with the rest of us living here on Earth. One of the things you may have noticed if you saw the President’s State of the Union speech was that Scott Kelly was in the First Lady‘s boxed seating area. During his speech President Obama specifically mentioned the one year mission and cited the importance of the area of personalized or precision medicine that is rapidly emerging as a powerful new set of techniques within biomedical research and clinical practice.

In part two of this blog posting, I will share with you the ethics and impacts of personalized medicine in space and on the ground.

Graham Scott, Ph.D., is the Chief Scientist and Institute Associate Director at the National Space Biomedical Research Institute (NSBRI), NASA’s biomedical research institute that was established in 1997 to work in partnership with the agency’s Human Research Program. A New Zealander by birth, Scott served as a Royal New Zealand Air Force pilot before obtaining a Ph.D. in astrochemistry. He came to the U.S. in 1997 where he worked for Nobel Laureate Robert F. Curl, Jr, Ph.D., at Rice University. Scott then went on to work on the Human Genome Project at Baylor College of Medicine, followed by a decade of leading R&D and marketing teams in corporate America, before being recruited back to Baylor to undertake his current leadership role with NSBRI.