At NASA Science we use any and all ways to communicate our exploration from all perspectives. We talk about the colleagues who come up with space missions, the complexity of building spacecraft, the people who can hardly wait for the data to arrive, and the historic mission milestones and science results. As the way we learn and disseminate information evolves, so must we at NASA Science, to ensure we are best in class when it comes to sharing our message.

Over the past decade, social media has become an integral way that NASA shares its science and research with the public. Social media not only allows us to reach a variety of audiences, ages and demographics, but also it enables NASA to be more accessible to the public. Features offered by the various platforms, like Q&A’s and live video, enable NASA to take its followers behind-the-scenes and into areas that are normally not accessed by the public. The conversational nature of social media allows NASA to share its message and to respond to the public’s questions and engage with followers like never before.

With this rapidly evolving platform, informed strategy is key. During a recent review, we took a look at all of the social media accounts associated with NASA’s Science Mission Directorate. We found that there are around 300 accounts across 8 platforms (Facebook, Flickr, Instagram, LinkedIn, Pinterest, Tumblr, Twitter and YouTube). Although well-intended in all cases, our initial “more is better” strategy did not always work in all cases as we hoped. For example, a significant number of these accounts were inactive for time-periods over years, and others were highly duplicative and confusing at times, with respect to focus and content, resulting in the fact that many great posts were not seen by large audiences.

Because of this and to improve the reach and impact of our social media efforts, we are working on a strategic social media plan that will consolidate these existing profiles across the 8 platforms. This consolidation does not mean that information will no longer be shared. In fact, the goal is to share the same information under more thematic and broader account handles that have larger audiences. Based on our deeper understanding of social media gained during the past years, we believe that this more focused and aligned effort will result in higher followership for these accounts and broader engagement, especially around missions or research efforts that might not normally get public attention.

During the past year or so, our teams have experimented with thematic accounts and other ways to create more “bang for the buck” – broader reach and deeper engagement. Here is one example: The @NASASun account on Twitter is a thematic account that shares the various ways NASA studies the Sun and its influence in our solar system. It was also a huge driver of content and traffic during the 2017 total solar eclipse. Rather than setting up a separate account for our newest Sun mission – Parker Solar Probe – relevant information is shared on @NASASun. This allows people interested in NASA’s study of the Sun to not only learn about Parker Solar Probe, but other missions that they might not normally have known about. 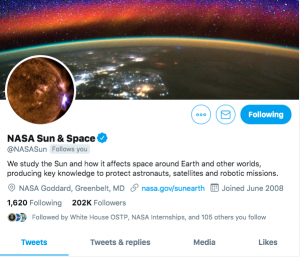 Another example has been a deliberate alignment of social media around crosscutting stories. An amazing Earth Science news-story about Greenland, that upon first glance appeared to only focus on one science discipline was deconstructed and shared by a diverse group of social media accounts across disciplines. This story highlighted a second possible impact crater under the Greenland Ice. Instead of treating this as solely an Earth Science story, we engaged groups from other disciplines. 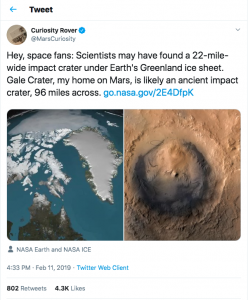 The result was astounding and added new context and viewpoints to the story. The Curiosity Rover account related the possible Greenland impact crater to the robot’s home on Mars – Gale Crater – which was likely created by an asteroid impact. As science is so often connected, the engagement we employed with this story highlighted those crosscutting angles to tell a more comprehensive narrative. This effort also resulted in 20 – 30% increased engagement compared to other similar social media posts. In addition, I noticed how much better the cross-disciplinary nature of science was shining through all this.

Over the next few months, you will see these efforts taking shape across our social media channels. Be aware that we do this for one reason and one reason only: We deeply care about sharing our messages with more people and this more strategic approach will allow NASA Science and its broad impact on society to be seen and appreciated by more.

Thank you for your support!