On Oct. 9, 2018 the 5 p.m. EDT update from the National Hurricane Center in Miami, Florida had upgraded Hurricane Michael to a Major Hurricane at Category 3 status. At that time, Michael had maximum sustained winds of 120 mph and NOAA’s GOES-East satellite provided a visible look at the hurricane. Michael has since strengthened into a Category 4 hurricane in the Gulf of Mexico. Credit: NOAA/ NASA MSFC, SPoRT

In September, North Carolina took a direct hit from a hurricane. Now it is Florida’s turn. 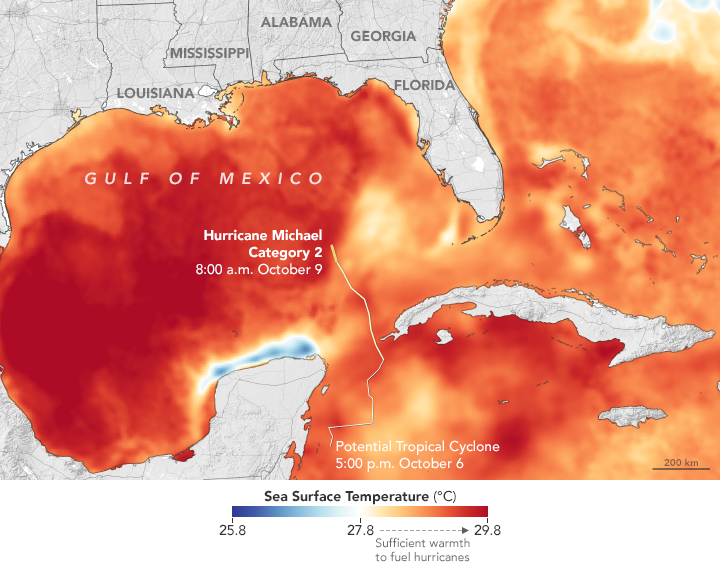 What began as a tropical disturbance in the Caribbean Sea on October 2, 2018, went on to graze the Yucatan Peninsula and then strengthen into Hurricane Michael. The storm continued on its way through the Caribbean Sea and the Gulf of Mexico.

National Hurricane Center forecasters expect the storm to make landfall in the Florida Panhandle or Big Bend region around midday on October 10. This area has faced relatively few hurricanes in the past, at least for the U.S. state that sees more landfalling hurricanes than any other.

“Only eight major hurricanes on record have passed within or near the projected landfall of Michael, and only three of those (Eloise 1975, Opal 1995, and Dennis 2005) were in the past 100 years,” noted Marangelly Fuentes, a NASA atmospheric scientist who has been tracking the storm with models maintained by NASA’s Global Modeling and Assimilation Office (GMAO). “Michael’s projected intensity at landfall is currently category 3, which is worrisome because many people living in the Panhandle have little or no experience with storms this intense.”

As Michael approaches land, two key factors will help govern the intensity of the storm: ocean temperatures and wind shear, the difference in wind speeds at upper and lower parts of a storm. Warm ocean water and low wind shear are required to sustain or intensify a hurricane’s strength.

Michael managed to strengthen despite facing significant westerly shear in the Caribbean Sea on October 9, something the National Hurricane Center called “most unusual.” It then passed into an area of low shear and warm ocean water on October 10, where it continued to intensify.

The map above shows sea surface temperatures on October 8-9, 2018. Meteorologists generally agree that sea surface temperatures (SSTs) should be above 27.8°C (82°F) to sustain and intensify hurricanes (although there are some exceptions). The data for the map were compiled by Coral Reef Watch, which blends observations from the Suomi NPP, MTSAT, Meteosat, and GOES satellites and computer models. Information about the storm track and winds come from the National Hurricane Center.

Unlike Hurricane Florence, which made landfall September 14 in North Carolina as a slow-moving category 1 storm, there are no indications that Michael will stall near the coastline. “The storm is fast moving, so only 6-10+ inches (15-25+ centimeters) of precipitation are forecasted to fall over the Panhandle,” said Fuentes.

However, forecasters do expect the storm to bring life-threatening winds and storm surge. On October 7, the governor of Florida declared a state of emergency and urged people in the path of the storm to evacuate.

The Moderate Resolution Imaging Spectroradiometer (MODIS) on NASA’s Aqua satellite acquired this natural-color image of Hurricane Michael on the afternoon of October 8, 2018.