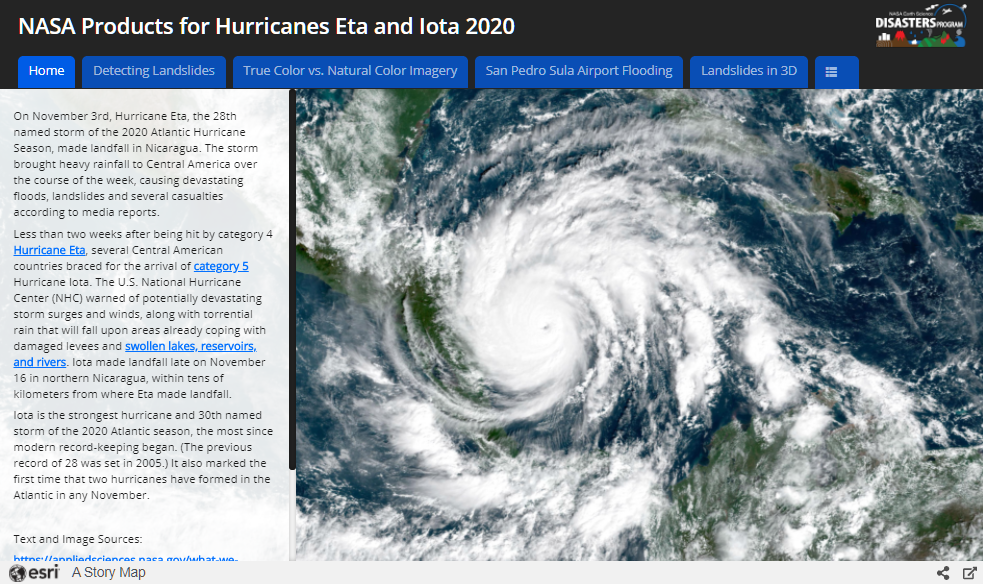 Less than two weeks after being hit by category 4 Hurricane Eta, several Central American countries braced for the arrival of category 5 Hurricane Iota. NASA and NOAA covered the storm with an array of Earth-observing instruments.

Iota is the strongest hurricane and 30th named storm of the 2020 Atlantic season, the most since modern record keeping began (breaking the previous record of 28 set in 2005.) It also marked the first time that two hurricanes have formed in the Atlantic in any November. Iota is the 13th storm to reach hurricane strength this year; the average hurricane year brings six hurricanes.

On November 16 at 1 p.m. EDT, NOAA’s National Hurricane Center (NHC) issued hurricane warnings for large portions of coastal Nicaragua and Honduras as the storm approached landfall. Iota had strengthened to a category 5 storm with sustained winds of 260 kilometers (160 miles) per hour.

The National Oceanic and Atmospheric Administration (NOAA) GOES-16 satellite (one of many geostationary NOAA satellites developed and launched by NASA) captured a natural-color image on Nov. 16 at 10 a.m. local time when the storm was at its peak strength. Iota’s eye was visible and surrounded by powerful thunderstorms.

Iota developed on Nov. 13 and strengthened to a hurricane two days later. Iota rapidly intensified in the warm waters of the Caribbean Sea. Within a day and a half, Iota’s wind speeds increased by 160 kilometers (100 miles) per hour.

Ocean temperatures must be near or above 27° Celsius (80.6 Fahrenheit) to sustain a tropical cyclone. Using data from NASA’s Multiscale Ultrahigh Resolution Sea Surface Temperature (MUR SST) project, NASA created a temperature map that showed sea surfaces in the Caribbean Sea and Gulf of Mexico at least that warm or warmer, which allowed for support and strengthening Hurricanes Iota and Eta. MUR incorporates temperature data from multiple NASA, NOAA, and international satellites, as well as ship and buoy observations.

By Michael Carlowicz, with scientific interpretation from Timothy Hall of the NASA Goddard Institute for Space Studies. For a more detailed version of this story, check out NASA’s Earth Observatory website.


Hurricane Eta (a Category 1) over Nicaragua on 11/4/2020 at approximately 5:25Z. This visualization focuses on the high precipitation southwest of Eta’s eye. Credit: NASA’s Scientific Visualization Studio

The Global Precipitation Measurement (GPM) Core Observatory satellite flew over Hurricane Eta at 11:41 p.m. CT on Tuesday, Nov. 3 (0541 UTC Wednesday, Nov. 4). GPM observed the storm’s rainfall with its two unique science instruments: the GPM Microwave Imager (GMI) and Dual-frequency Precipitation Radar (DPR). As the visualization shows, the instruments observed a large swath of heavy precipitation extending to the north and east of the hurricane’s center, which matched earlier forecasts that called for particularly heavy rainfall across the storm’s path.
These two- and three-dimensional observations of precipitation structure are the hallmark of the GPM mission – managed jointly by NASA and the Japan Aerospace Exploration Agency (JAXA) — which aims improve our understanding of the water cycle and extreme weather events, and contributes to improved climate modeling and weather forecasting around the world.

These visualizations depict the GPM satellite pass about seven hours after Hurricane Eta made landfall on the coast of Nicaragua as a category 4 storm. Current NHC forecasts indicate Eta will move northwest over Central America then head northeast across the Caribbean Sea, threatening Cuba and Florida early next week.

GPM data is archived at https://pps.gsfc.nasa.gov/


Hurricane Eta (a Category 1) on 11/4/2020 at approximately 5:25Z. This visualization focuses on the disperse outer bands northeast of the eye. Credit: NASA’s Scientific Visualization Studio