NASA’s Aqua satellite captured an image of Tropical Cyclone 06A, known as Pawan near the Horn of Africa. Pawan is forecast to make landfall in Somalia in the next day.

The Horn of Africa is located in eastern Africa and resembles a horn that extends into the western Arabian Sea, Northern Indian Ocean. The region includes the countries of Djibouti, Eritrea, Ethiopia, and Somalia.

On Dec. 6, 2019, the Moderate Imaging Spectroradiometer or MODIS instrument that flies aboard NASA’s Aqua satellite provided a visible image of Pawan that showed the western quadrant of the storm over northern Somalia at the tip of the Horn of Africa. Pawan no longer appears circular in nature, and that is an indication that the storm has weakened. A rounded shape of a tropical cyclone indicates a more organized storm.

At 4 a.m. EST (0900 UTC) on Dec. 6, the Joint Typhoon Warning Center noted that Tropical Cyclone Pawan was located near 7.9 degrees north latitude and 53.0 degrees east longitude. That is about 550 nautical miles south of Salalah, Oman. Maximum sustained winds 35 knots (40 mph/65 kph) and weakening. Pawan is moving to the west-southwest and expected to make landfall into Somalia within 24 hours.

NASA’s Aqua satellite is one in a fleet of NASA satellites that provide data for hurricane research.

Tropical cyclones are the most powerful weather event on Earth. NASA’s expertise in space and scientific exploration contributes to essential services provided to the American people by other federal agencies, such as hurricane weather forecasting. 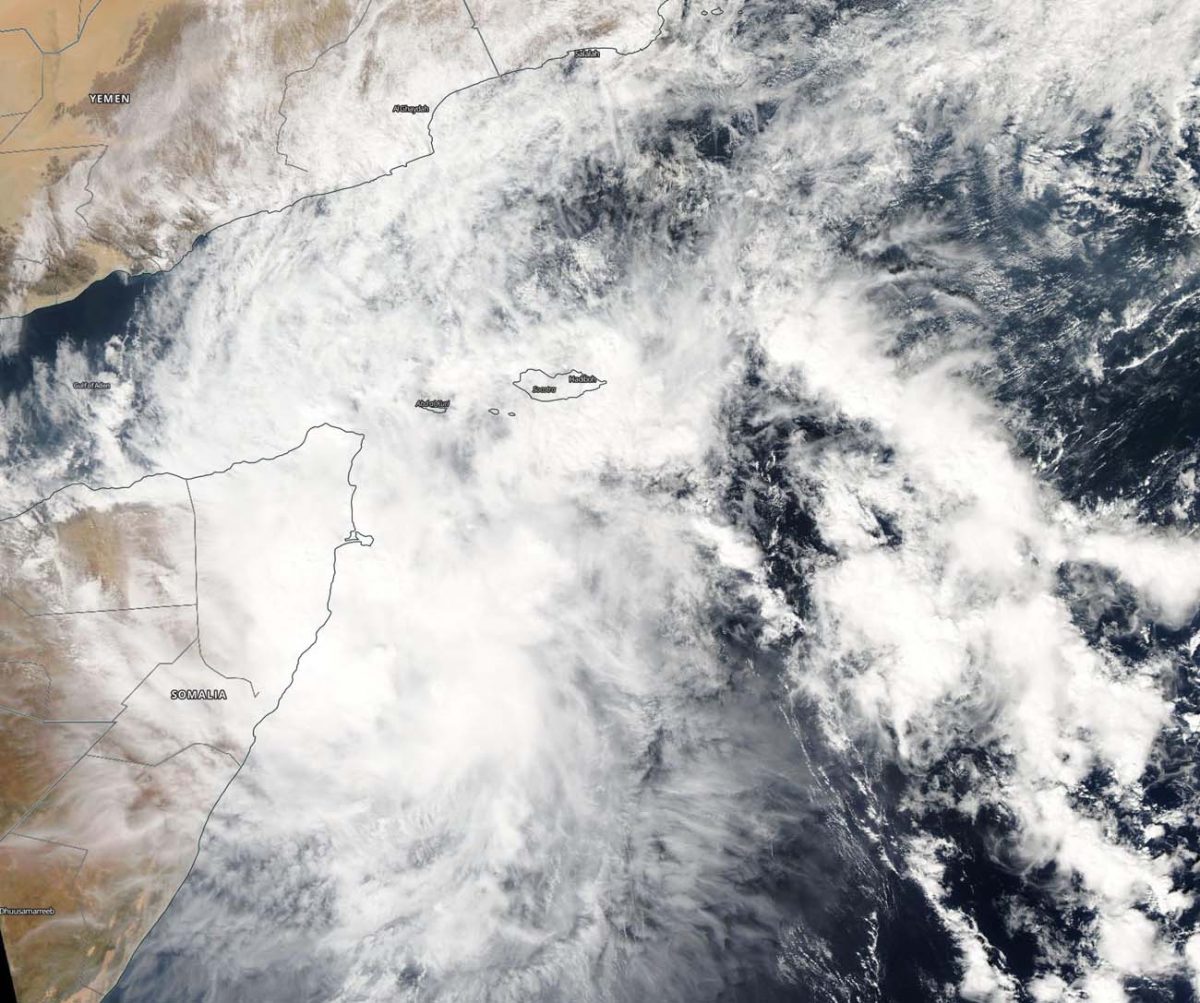 Visible imagery from NASA satellites help forecasters understand if a storm is organizing or weakening. The Visible Infrared Imaging Radiometer Suite (VIIRS) instrument aboard Suomi NPP provided a visible image of 06A on Dec. 5.  VIIRS showed Tropical Storm Pawan or 06A was moving through the western Arabian Sea, spreading clouds as far northwest as Oman and Yemen on its way toward Somalia. Satellite imagery has shown limited deep convection and development of strong thunderstorms over the partially exposed low-level circulation center.

On Dec. 5, at 4 a.m. EST (0900 UTC), Tropical Cyclone Pawan (06A) was located near latitude 9.5 degrees north and longitude 55.9 degrees east, about 462 miles south-southeast of Salalah, Oman. The storm was moving to the west and had maximum sustained winds 40 knots (45 mph/74 kph). The storm is expected to weaken over the next day as it approaches Somalia.

Tropical Cyclone Pawan (06A) is in the process of turning west-southwest and is expected to make landfall in Somalia by Dec. 7.

NASA’s Aqua satellite found some powerful storms in Tropical Storm 06A as it moved through the Arabian Sea toward Somalia.

NASA’s Aqua satellite used infrared light to analyze the strength of storms in 06A and found it was maintaining strength. Infrared data provides temperature information, and the strongest thunderstorms that reach high into the atmosphere have the coldest cloud top temperatures.

On Dec. 4 at 4:55 a.m. EST (0955 UTC), the Moderate Resolution Imaging Spectroradiometer or MODIS instrument aboard NASA’s Aqua satellite gathered temperature information about Tropical Storm 06A’s cloud tops. MODIS found several small areas of powerful thunderstorms where temperatures were as cold as or colder than minus 80 degrees Fahrenheit (minus 62.2 degrees Celsius), embedded in a much larger area of slightly warmer cloud tops of minus 70 degrees Fahrenheit (minus 56.6 Celsius). Cloud top temperatures that cold indicate strong storms with the potential to generate heavy rainfall.

On Dec. 4 at 10 a.m., EST (1500 UTC), Tropical Storm 06A was located near latitude 8.4 degrees north and longitude 57.0 degrees east in the Arabian Sea, Northern Indian Ocean. That is about 864 nautical miles east-southeast of Djibouti. Djibouti is a sovereign state in the Horn of Africa with a coastline on the Gulf of Aden. It is bordered by Somalia to the south, Ethiopia to the west, and Etriea to the north. 06A was moving to the northwest and had maximum sustained winds near 35 knots (40 mph/65 kph).

The Joint Typhoon Warning Center or JTWC noted, “The storm’s good outflow (air that flows outwards from a storm system) and warm sea surface temperatures are being offset by strong (20-25 knots/23-29 mph/37-46 kph) vertical wind shear to make the environment marginally supportive. Tropical Storm 06A appeared to accelerate west-northwestward over the past six hours, suggesting a subtropical ridge (an elongated area of high pressure) to the north has become the primary steering mechanism.” Over the next 24 hours, the subtropical ridge will cause 06A to turn onto a west southwestward track and remain there until making landfall and dissipating.

Tropical Storm 06A is expected to make landfall in east central Somalia late on Dec. 6.

Imagery from NASA-NOAA’s Suomi NPP satellite showed that a tropical depression in the Arabian Sea has consolidated and organized despite facing wind shear. Tropical Depression 06A is now Tropical Cyclone 06A.

The Visible Infrared Imaging Radiometer Suite (VIIRS) instrument aboard Suomi NPP provided a visible image of 06A that revealed powerful storms were northwest of the center of circulation, but the storm was able to strengthen despite the harsh environmental conditions. The center of circulation is apparent in the VIIRS image as a small area of circulation located southeast of the bulk of clouds and showers.

In general, wind shear is a measure of how the speed and direction of winds change with altitude. Tropical cyclones are like rotating cylinders of winds. Each level needs to be stacked on top each other vertically in order for the storm to maintain strength or intensify. Wind shear occurs when winds at different levels of the atmosphere push against the rotating cylinder of winds, weakening the rotation by pushing it apart at different levels. In the case of Tropical Cyclone 06A, southeasterly winds are pushing the bulk of the storm’s clouds to the northwest.

It is moving to the northeast, however, and the track will slowly turn west southwestward as a subtropical ridge (elongated area of high pressure) builds back in to the north.

Tropical Cyclone 06A is forecast to make landfall in east central Somalia on Dec. 6 as a tropical storm.