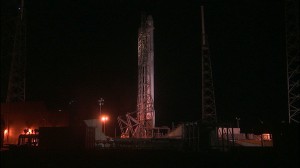 Good morning, and thanks for joining us for the countdown to the SpaceX CRS-5 launch, scheduled for an instantaneous window at 4:47 a.m. EST. The SpaceX Falcon 9 rocket and Dragon spacecraft are going through their final prelaunch paces at Space Launch Complex 40 at Florida’s Cape Canaveral Air Force Station. As noted earlier, forecasters with the U.S. Air Force 45th Weather Squadron have improved tonight’s weather prediction to 90 percent “go.”

On this flight, the fifth in a series of cargo resupply missions to the International Space Station, Dragon is carrying science experiments, technology demonstrations and supplies for the station crew. It will be the sixth time a Dragon spacecraft has visited the orbiting laboratory.