A nearly 6,000-pound care package is on its way to the International Space Station aboard a SpaceX Dragon spacecraft. The company’s 16th commercial cargo mission to resupply the space station began at 1:16 p.m. EST on Dec. 5, 2018, with liftoff aboard a SpaceX Falcon 9 rocket from Space Launch Complex 40 at Cape Canaveral Air Force Station in Florida.

“It was an incredible launch,” said Joel Montalbano, deputy ISS program manager, NASA’s Johnson Space Center in Houston. “This was the fourth launch in three weeks to the space station.”

After a successful climb into space, the Dragon spacecraft now is in orbit with its solar arrays deployed and drawing power.

“This is a great day. We had a beautiful launch.” said Hans Koenigsmann, vice president of Build and Flight Reliability at SpaceX.

The Dragon spacecraft will deliver science, supplies and hardware to the orbiting laboratory. Science experiments include the Robotic Refueling Mission 3 (RRM3) and the Global Ecosystem Dynamics Investigation (GEDI).

GEDI will make high-quality laser ranging observations of Earth’s forests and topography required to advance the understanding of important carbon and water cycling processes, biodiversity and habitat. GEDI will be mounted on the Japanese Experiment Module’s Exposed Facility and will provide the first high-resolution observations of forest vertical structure at a global scale.

Also, the Growth of Large, Perfect Protein Crystals for Neutron Crystallography (Perfect Crystals) crystallizes an antioxidant protein found inside the human body to analyze its shape. This research may shed light on how the protein helps protect the human body from ionizing radiation and oxidants created as a byproduct of metabolism. For best results, analysis requires large crystals with minimal imperfections, which are more easily produced in the microgravity environment of the space station.

Live coverage of the rendezvous and capture will air on NASA Television and the agency’s website beginning at 4:30 a.m. Saturday, Dec 8. Installation coverage is set to begin at 7:30 a.m. Astronauts aboard the station will capture the Dragon using the space station’s robotic arm and then install it on the station’s Harmony module. The Dragon spacecraft will spend about five weeks attached to the space station, returning to Earth in January 2019, with more than 4,000 pounds of research, hardware and crew supplies.

For updates during the mission, visit https://www.nasa.gov/commercialresupply.

The SpaceX Dragon spacecraft is on its way to the International Space Station, after launching on the company’s Falcon 9 rocket at 1:15 p.m. EST on Dec. 5, 2018. A postlaunch press conference will take place at 3:15 p.m. on NASA Television and the agency’s website.

Live coverage of the rendezvous and capture of the Dragon will air on NASA Television and the agency’s website beginning at 4:30 a.m. Saturday, Dec. 8. Installation coverage is set to begin at 7:30 a.m. 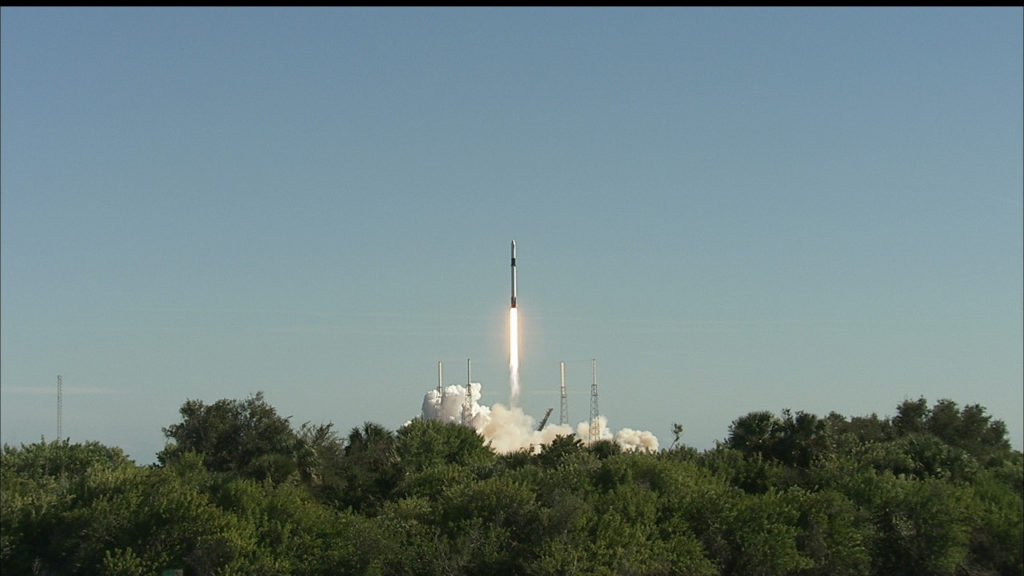 The SpaceX Falcon 9 rocket with the Dragon spacecraft lifts off Space Launch Complex 40 at Cape Canaveral Air Force Station in Florida, on Dec. 5, 2018, at 1:16 p.m. EST.

Dragon’s solar arrays are unfurled and the spacecraft will begin a carefully choreographed series of thruster firings to reach the orbiting laboratory three days later, Saturday, Dec. 8. Dragon will deliver about 5,600 pounds of cargo to the International Space Station.

The Dragon spacecraft has separated from the second stage of the SpaceX Falcon 9 rocket.

The Falcon 9 rocket’s first-stage engines have finished their burn and the first stage has separated from the vehicle. As the second stage continues the flight, the first stage will aim for a landing at Cape Canaveral Air Force Station.

T-0, ignition and liftoff at 1:16 p.m. EST of the SpaceX Falcon 9 rocket and Dragon spacecraft, setting off on the company’s 16th mission to deliver supplies, equipment and science materials to the International Space Station. The vehicle is quickly climbing away from Space Launch Complex 40 at Cape Canaveral Air Force Station in Florida.

The countdown continues toward liftoff at 1:16 p.m. EST, an instantaneous launch window,10 minutes from now. During this time, the Falcon 9’s engines will be chilled to condition them for launch, the flight computer will run its prelaunch checks and the rocket’s propellant tanks will be brought to flight pressure. Finally, the SpaceX Launch Director will verify “go for launch.”

About three minutes prior to launch, the gantry-like strongback support structure will be lowered away from the rocket. The terminal countdown begins at T-30 seconds.

Meteorologists with the U.S. Air Force 45th Weather Squadron are monitoring conditions in the launch area. The current weather prediction is 90 percent “go” at launch time.

The Falcon 9 rocket went vertical this morning and weather is 90 percent favorable at launch time. Dragon’s internal countdown is running and propellant loading is underway.

Today’s launch is a cross-country effort. Launch controllers at the Florida spaceport are working in concert with teams at NASA’s Johnson Space Center in Houston and SpaceX’s control center in Hawthorne, California. The launch blog originates from the NASA News Center here at Kennedy, a few miles west of the launch complex.

There’s more to come, so stay with us.