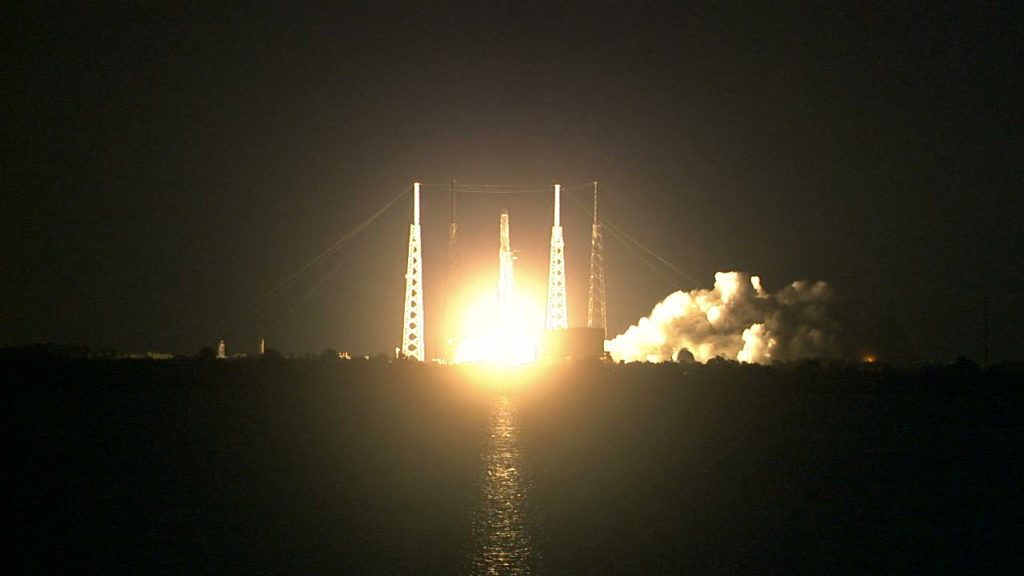 The spacecraft is in orbit after a successful predawn launch aboard a SpaceX Falcon 9 rocket. The on-time liftoff took place at 5:42 a.m. EDT from Space Launch Complex 40 at Florida’s Cape Canaveral Air Force Station.

The SpaceX Dragon spacecraft is flying on its own in a preliminary orbit after separation from the Falcon 9 rocket’s second stage. Coming up, the Dragon’s power-generating solar arrays will deploy, a process that takes about 8 to 10 minutes.

Here are a few early photos from this morning’s liftoff.

MECO! The Falcon 9’s first stage has completed its burn and separated from the vehicle. The second stage’s Merlin engine has ignited for the duration of the climb to space.

Liftoff of the SpaceX Falcon 9 rocket and Dragon spacecraft on the company’s 15th commercial resupply mission to the International Space Station for NASA. The vehicle is climbing away from Cape Canaveral Air Force Station’s Space Launch Complex 40, lighting the predawn sky over Florida’s Space Coast as it blazes a trail downrange.

The vehicle will pass “max Q” about a minute and 18 seconds into the flight. Just over a minute later, the nine Merlin engines powering the rocket’s first stage will shut down and separate from the vehicle, clearing the way for the second stage’s single Merlin engine to ignite and continue the flight.

T-minus three minutes and counting. Weather is “go.” The strongback support structure has been lowered and the Falcon 9 rocket is awaiting liftoff at 5:42 a.m.

As the final minutes count down toward the 5:42 a.m. liftoff of the SpaceX Falcon 9 rocket and Dragon spacecraft, there are some significant milestones clearing the way toward launch. The Falcon 9’s Merlin engines will be chilled to condition them before they come in contact with cryogenic propellants. The strongback, a gantry-like support structure at Space Launch Complex 40, will lower away from the rocket. Finally, the Eastern Range and the SpaceX launch director each will give a final approval to launch.

This special delivery, like all commercial cargo resupply missions, contains a variety of items on their way to the International Space Station. The Dragon spacecraft has been carefully packed with nearly 6,000 pounds of science and research, as well as station hardware and supplies for the astronauts living on board.

Here is a high-level look at some of the science traveling to the station on CRS-15:

Additionally, four new varieties of plants are headed to the station for testing in the Veggie growth chamber. NASA researchers had help on this mission from middle and high school students who selected two of these plants. Read more here.

Hardware bound for the station includes a new Canadian-built Latching End Effector (LEE) for the station’s Canadarm2, which is outfitted with an LEE at each end. This unit is launching as a spare to replace a unit that failed and was removed last fall.

Also making the journey to the orbiting outpost is a toy dog representing the Newfoundland that accompanied Lewis and Clark on their historic expedition across the American west. The dog’s flight to the space station is a collaboration between NASA and the National Park Service as the agencies celebrate NASA’s 60th anniversary and the National Trail System’s 50th anniversary.

The SpaceX Falcon 9 rocket is a two-stage rocket powered by nine of the company’s Merlin engines on the first stage, and a single Merlin engine on the second stage. These engines run on cryogenic liquid oxygen and a fuel called RP-1, a highly refined kerosene.

The rocket is topped by the SpaceX Dragon spacecraft, which provides pressurized and unpressurized “trunk” space for the cargo it’s carrying to the International Space Station.

The first stage flying today has been flown before – it was used on the launch of NASA’s Transiting Exoplanet Survey Satellite (TESS) on April 18 of this year. Additionally, the Dragon launching today is making its second trip to the station; it previously flew on SpaceX CRS-9, back in July 2016.

Launch Weather Officer Mike McAleenan of the U.S. Air Force’s 45th Space Wing briefed the launch team and the forecast remains the same: a 90 percent chance of favorable conditions for liftoff this morning, with light winds out of the southwest at 8 to 10 miles per hour and a temperature of 76 degrees Fahrenheit.

Here’s a timeline of today’s countdown and ascent milestones. All times are approximate.