The SpaceX Falcon 9 rocket and Dragon spacecraft are prepared for Tuesday’s planned launch, and the International Space Station is ready to receive the cargo that will be sent aloft on the resupply flight, NASA and SpaceX officials reported today.

Launch of the Falcon 9 rocket on the SpaceX CRS-5 mission is scheduled for 6:20 a.m. from Cape Canaveral Air Force Station’s Space Launch Complex 40.

Clouds across the launch area are expected to thin out, and forecasters with the U.S. Air Force’s 45th Weather Squadron are predicting a 70 percent chance of favorable conditions at launch time.

Join us right here tomorrow at 5 a.m. EST for live updates from the countdown.

The Dragon spacecraft is carrying a wide variety of science investigations to the International Space Station on SpaceX CRS-5.

SABOL, short for Self-Assembly in Biology and the Origin of Life: A Study into Alzheimer’s, could advance our understanding of Alzheimer’s disease and similar conditions – and, scientists hope, ultimately help develop a way to stop them.

The Advanced Plant EXperiments on Orbit (APEX) 3 and Biological Research in Canisters (BRIC) 20 are designed to help investigate how cells, plants and animals respond to changes in gravity. These experiments will help advance knowledge in the physical and biological sciences that in turn could benefit humans on Earth as well as astronauts on long-duration space missions.

NASA’s Fruit Fly Lab is making its debut aboard the space station with Fruit Fly Lab-01. The fruit fly is a widely studied biological research model, and this study will help us better understand how spaceflight impairs the body’s ability to fight infections.

Student science is ready to fly after the Student Spaceflight Experiments Program worked quickly to prepare their investigations for a second chance at launch.

The Center for the Advancement of Science in Space, or CASIS, is launching new science to the International Space Station: 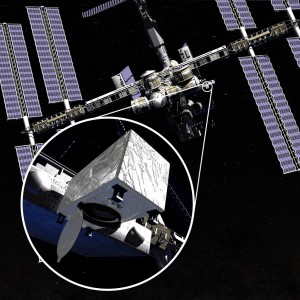 The Cloud-Aerosol Transport System, or CATS, is a lidar remote-sensing instrument set to launch tomorrow on SpaceX CRS-5. The payload will extend profile measurements of atmospheric aerosols and clouds from the International Space Station.

CATS is designed to measure the location, composition and distribution of pollution, dust, smoke, aerosols and other particulates in Earth’s atmosphere. The findings will improve our understanding of aerosol and cloud properties and interactions and improve climate change models.

The launch weather forecast has improved to 70 percent “go,” according to the U.S. Air Force 45th Weather Squadron. The possibility of thick clouds is the primary concern. Liftoff is scheduled for 6:20 a.m. EST from Space Launch Complex 40 at Cape Canaveral Air Force Station.

Three news conferences related to the CRS-5 mission are scheduled for today at NASA’s Kennedy Space Center in Florida. The first event is a Cloud-Aerosol Transport System (CATS) briefing at noon, followed at 1:30 p.m. by an ISS Research and Technology panel. Events conclude with the prelaunch news conference at 4 p.m. All will air live on NASA Television. 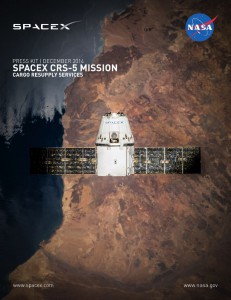 If you’re looking for information about the SpaceX Falcon 9 rocket, the company’s Dragon spacecraft or what’s being delivered to the International Space Station on this mission, check out the SpaceX CRS-5 Press Kit.

Inside you’ll find details about the cargo, launch sequence and mission timeline.

Meteorologists predict a 70 percent chance of favorable weather for the planned Dec. 19 launch of the fifth SpaceX cargo mission to the International Space Station. According to the U.S. Air Force’s 45th Weather Squadron, a system developing along the western Gulf Coast tomorrow will bring mid- and upper-level clouds over Florida’s Space Coast. These clouds could linger through Friday, making the possibility of thick clouds the primary concern. In the event of a 24-hour delay, the 70 percent “go” forecast is expected to remain the same for Saturday.