In March 2019, Tropical Cyclone Idai pummeled through southeastern Africa to become one of the deadliest storms ever recorded to hit the Southern Hemisphere. The storm caused catastrophic flooding, landslides, and large numbers of casualties across Mozambique, Malawi, and Zimbabwe. One of the most affected areas was Beira, Mozambique’s second-largest port city of 530,000 people, where the cyclone made landfall on March 14.

The storm “destroyed 90 percent” of Beira, according to an initial assessment by a team from the International Federation of Red Cross and Red Crescent Societies. As of March 20, an estimated 1 million people were without electricity.

The image on the left shows the extent of electric lighting across Beira on March 9, 2019, a typical night before the storm hit; the image on the right shows light on March 24, 2019, three days after Idai had passed. Nearly all electricity and internet went out, except near the airport where relief organizations had set up a server.

These images of Beira’s nighttime lights are based on data captured by the Suomi NPP satellite. The data was acquired by the Visible Infrared Imaging Radiometer Suite (VIIRS) “day-night band,”which detects light in a range of wavelengths from green to near-infrared, including reflected moonlight, light from fires and oil wells, lightning, and emissions from cities or other human activity. A team of scientists from NASA’s Goddard Space Flight Center and Marshall Space Flight Center processed and corrected the raw VIIRS data to filter out stray light from sources that are not electric lights as well as other atmospheric interference, such as dust, haze, and thin clouds. The base map makes use of data collected by the Landsat satellite.

The cyclone also knocked out transmission lines in Mozambique that carry power to South Africa. The major state-owned utility company in South Africa has been administering controlled blackouts for more than a week to conserve energy until power lines are fixed, which may take weeks to months.

Tropical Cyclone Idai barreled into southern Africa. in mid-March 2019, leaving a deadly path of destruction in Mozambique, Malawi, and Zimbabwe.

According to reports, the Chimanimani District in Zimbabwe was among the worst affected areas. Widespread changes in the landscape are visible in satellite images from before and after the storm, including the landslide seen below: 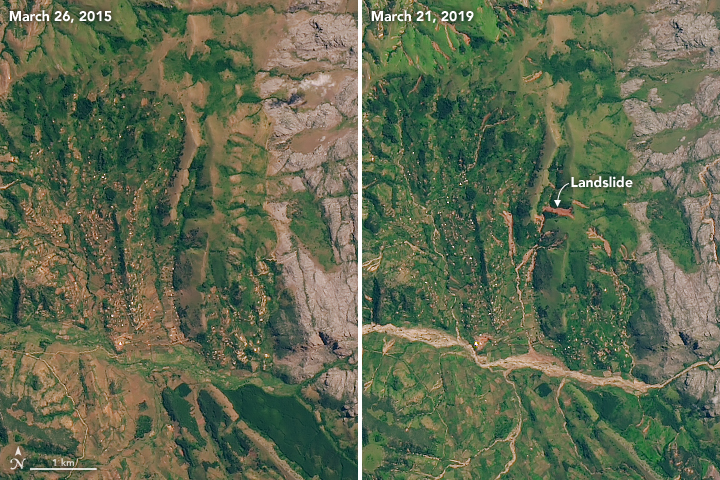 For the entire story: https://earthobservatory.nasa.gov/images/144739/floods-and-landslides-in-chimanimani

Tropical Cyclone Idai brought heavy rainfall and deadly flooding to Mozambique. Idai made landfall directly on top of the City of Beira in Mozambique. This City is home to more than 500,000 people who have been impacted by flooding and other damage caused by the cyclone.

The Precipitation Processing System (PPS) at NASA’s Goddard Space Flight Center in Greenbelt, Md. processes and creates the realtime IMERG data products.  This Global Precipitation Measurement mission or GPM IMERG animation, created at NASA shows accumulated precipitation for the region from March 3 to 19.  IMERG showed over 20 inches of rain fell in some areas. The other piece of analysis is that the early precipitation saturated the soil, which made the flooding worse when the cyclone turned around and made landfall.

The Integrated Multi-satellitE Retrievals for GPM (IMERG) creates a merged precipitation product from the GPM constellation of satellites. These satellites include DMSPs from the U.S. Department of Defense, GCOM-W from the Japan Aerospace Exploration Agency (JAXA), Megha-Tropiques from the Centre National D’etudies Spatiales (CNES) and Indian Space Research Organization (ISRO), NOAA series from the National Oceanic and Atmospheric Administration (NOAA), Suomi-NPP from NOAA-NASA, and MetOps from the European Organisation for the Exploitation of Meteorological Satellites (EUMETSAT).  All of the instruments (radiometers) onboard the constellation partners are intercalibrated with information from the GPM Core Observatory’s GPM Microwave Imager (GMI) and Dual-frequency Precipitation Radar (DPR).

On March 15, the Moderate Resolution Imaging Spectroradiometer or MODIS instrument aboard NASA’s Terra satellite provided a visible image of Idai. The imagery showed the storm centered over central Mozambique and its western quadrant had already spread into Zimbabwe. Even over land, the system still showed a ragged eye on microwave satellite imagery.

Idai is expected to affect parts of the Mozambique provinces of Zambézia, Sofala, Manica, Tete and Inhambane. Moderate to strong rains accompanied by severe thunderstorms and gusty winds are expected in the north of the provinces of Niassa, Cabo Delgado and northern Tete.

JTWC has forecast Idai to rapidly weaken as it tracks across central Mozambique and into northern Zimbabwe.

Tropical Cyclone Idai was approaching landfall in Mozambique when NASA’s Aqua satellite provided an infrared look at the cloud top temperatures to determine the strongest parts of the storm.

On March 14, warnings were in effect in Mozambique as Idai nears landfall. Idai will affect (parts of) the Mozambique provinces of Zambézia, Sofala, Manica and Inhambane with very strong winds (190 to 210 kilometers per hour), accompanied by very heavy rains (more than 150 mm in 24 hours) and severe thunderstorms. INAM also foresees the continuation of moderate to strong rains (30 to 50 mm / 24h), accompanied by severe thunderstorms and gusty winds north of the provinces of Niassa and Cabo Delgado.

On March 14 at 11 a.m. EDT (1500 UTC), the center of Tropical Cyclone Idai was located near latitude 19.9 degrees south and longitude 36.3 degrees east. That puts the center of Idai about 258 nautical miles west-northwest of Europa Island. Idai’s western quadrant was already pummeling Mozambique. Maximum sustained winds were near 100 knots (115 mph/185 kph).  The Joint Typhoon Warning Center expects that Idai will maintain current intensity until landfall occurs near Beira, Mozambique within 24 hours.

At 4 a.m. EDT (0800 UTC) on March 13 the Moderate Resolution Imaging Spectroradiometer or MODIS instrument that flies aboard NASA’s Terra satellite gathered infrared data on Idai. Infrared data provides temperature information. Strongest thunderstorms circled Idai’s center and contained cloud top temperatures as cold as minus 70 degrees Fahrenheit (minus 56.6 Celsius). NASA research has shown that cloud tops with temperatures that cold were high in the troposphere and have the ability to generate heavy rain.

MODIS infrared imagery also indicated Idai’s eye is about 20 nautical miles wide in diameter, although it was covered by high clouds.

On March 13, the Mozambique National Meteorology Institute (INAM) noted that Idai is causing very heavy rains of more than 100 millimeters (4 inches) in 24 hours over the Mozambique Channel.

Idai is forecast to make landfall just north of Biera, Mozambique between March 14 at 1200 UTC and March 15 at 0000 UTC (on March 14 between 8 a.m. to 8 p.m. EDT). Beira is the fourth largest city in the country and is located in the Sofala Province, central region of the country. Heavy rains, thunderstorms and hurricane-force winds are expected as Idai comes ashore.

NASA’s Terra satellite passed over the Southern Indian Ocean and caught a visible image of Tropical Cyclone Idai in the Mozambique Channel. The channel is located between the country of Mozambique on the African mainland and the island nation of Madagascar.

On March 12 the Moderate Resolution Imaging Spectroradiometer or MODIS instrument aboard NASA’s Terra satellite provided a visible image of Tropical Cyclone Idai. Satellite imagery showed Idai maintained a well-defined eye, although still obscured by high clouds. Idai appeared to be almost directly between Mozambique and Madagascar. Both countries have advisories in effect on March 12.

The Joint Typhoon Warning Center forecast calls for Idai to re-intensify as it moves southwest, peaking at 100 knots (115 mph/185 kph) before making landfall near Beira, Mozambique after 3 days.

For advisories from the Mozambique National Meteorological Institute (in Portuguese), visit: http://www.inam.gov.mz/index.php/pt/novo-sistema

The Mozambique Channel is the body of water in the Southern Indian Ocean that flows between Mozambique on the African mainland and the island nation of Madagascar.

On March 11, 2019, the Moderate Resolution Imaging Spectroradiometer or MODIS instrument aboard NASA’s Aqua satellite captured a visible image of Tropical Cyclone Idai. Bands of powerful thunderstorms were wrapping around an eye obscured by high clouds. The eye appears to be about 17 nautical-miles wide. At the time of the image, west-central Mozambique was being affected by the eastern quadrant of this powerful storm.

The Joint Typhoon Warning Center expects Idai to intensify further as it moves west. Idai’s sustained winds are expected to peak at a Category 4 hurricane strength (on the Saffir-Simpson hurricane wind scale) with 125 knots (144 mph/231.5 kph) before making landfall near Beira, Mozambique after March 15.