Today’s launch opportunity has been scrubbed because of poor weather. “The launch director and team have made the determination to scrub today’s launch attempt,” Mike Curie, NASA launch commentator reported. Next launch attempt is Sunday morning at 1:52 a.m. EDT. Our countdown coverage will begin at 12:45 a.m. EDT on the launch blog and on NASA TV. The forecast calls for a 40 percent chance of acceptable conditions for the Sunday attempt.

Refined kerosene and liquid oxygen have been pumped into the tanks of the Falcon 9 this morning as the launch team progresses through its checklist. The nine-engine first stage will push the rocket and spacecraft off the pad with 1.3 million pounds of force. About 2 minutes and 41 seconds into flight, with the rocket about 50 miles above Earth and moving at supersonic speeds, the first stage engines shut down and the stage falls away, leaving the single-engine second stage to push the Dragon into orbit. Nine and-a-half minutes after launch, the Dragon will fly free and open its solar array wings. It’ll reach the International Space Station two days later.

Mike Curie, NASA’s Launch Commentator, reports that a weather reconnaissance flight that had hoped to find a gap in the clouds around Cape Canaveral Air Force Station here in Florida instead found that the clouds are instead thickening. The launch team is continuing with its preparations for a 2:14 a.m. EDT liftoff, but weather remains a doubt for this morning. Official odds remain at 10 percent chance of acceptable conditions. 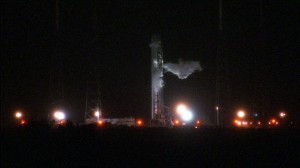 Two of the launch commit criteria remain no-go this morning ahead of the 2:14 a.m. EDT launch opportunity. Current conditions violate rules on disturbed weather in the area and thick clouds over the launch site. Briefing the launch team moments ago, meteorologist Mike McAleenan put the chances of acceptable conditions at only 10 percent. “We’re not looking too good,” McAleenan said. The launch window is instantaneous, so the launch team doesn’t have any room to try to wait for clearing. If the launch cannot go tonight, there is another chance Sunday morning. The forecast for Sunday morning calls for a 60 percent chance of acceptable conditions.

We have an hour and 14 minutes before the launch this morning of SpaceX’s Falcon 9 rocket and Dragon spacecraft on a cargo-delivery mission to the International Space Station. Liftoff is scheduled for 2:14 a.m. EDT from Launch Complex 40 here at Cape Canaveral Air Force Station. The launch window is instant since the Dragon has to be put on a precise path to catch the ISS which is moving at 17,500 mph. Weather is the primary concern and the chance of acceptable conditions has dropped to 30 percent. There are no technical concerns at this hour as the launch teams for the company and NASA track the milestones during this last phase of the countdown. The Dragon spacecraft is equipped only to carry cargo and has been loaded with 5,000 pounds of materials the crew of the space station will put to use. We’ll detail some of the experiments and other elements going up on this flight as the blog goes along. We’ll also track all the countdown highlights as they occur and tell you a few things about the Falcon 9 and Dragon spacecraft.

The SpaceX launch control team has been given a “go” to fuel the Falcon 9 rocket for the launch of SpaceX CRS-4 to the International Space Station. There is a 30 percent chance for favorable weather at the liftoff time, which has changed by one second to 2:14:38 a.m. EDT Saturday.

The fourth SpaceX cargo mission to the space station under NASA’s Commercial Resupply Services contract is scheduled to launch from Space Launch Complex 40 at Cape Canaveral Air Force Station in Florida. NASA television coverage will begin at 1 a.m. The spacecraft’s 2.5 tons of supplies, science experiments, and technology demonstrations includes critical materials to support 255 science and research investigations that will occur during the station’s Expeditions 41 and 42.

The fourth SpaceX cargo mission to the space station under NASA’s Commercial Resupply Services contract is scheduled to launch Saturday from Cape Canaveral Air Force Station in Florida. Liftoff of the SpaceX Falcon 9 rocket is targeted for an instantaneous window at 2:14 a.m. EDT. Live countdown coverage begins at 1 a.m. on NASA Television and NASA’s Launch Blog.

Weather forecasters are predicting a 50 percent chance of favorable conditions at launch time, with possible thick clouds and rain showers as primary concerns.

The Dragon spacecraft’s 2.5 tons of supplies, science experiments, and technology demonstrations includes critical materials to support 255 science and research investigations that will occur during the station’s Expeditions 41 and 42.

“This flight shows the breadth of ISS as a research platform, and we’re seeing the maturity of ISS for that,” NASA Chief Scientist Ellen Stofan said during a prelaunch news conference at NASA’s Kennedy Space Center in Florida. 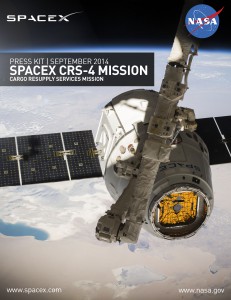 Want to find out details of all sorts about the upcoming SpaceX cargo mission to the International Space Station? The SpaceX CRS-4 PressKit is a good place to start. It has what you need to know about the Falcon 9, the Dragon spacecraft and some of the NASA experiments that will fly onboard, including the RapidScat.

Launch of the mission is scheduled for 2:14 a.m. EDT Saturday from Cape Canaveral Air Force Station.

You can catch all the countdown highlights as they happen here on the NASA Launch Blog and on NASA TV beginning at 1 a.m. EDT.

The launch of the fourth SpaceX cargo mission to the International Space Station is scheduled for Sept. 20 from Cape Canaveral Air Force Station in Florida. The one-day adjustment in the launch date was made to accommodate preparations of the SpaceX Falcon 9 rocket and was coordinated with the station’s partners and managers.

Slated for liftoff at 2:16 a.m. EDT, the company’s Dragon capsule will carry about 5,000 pounds of experiments, equipment and supplies to the orbiting laboratory. The spacecraft will ride into orbit atop a Falcon 9 rocket, also built by SpaceX. Our continuous coverage of the countdown and liftoff of the mission will begin at 1:15 a.m. EDT on the NASA Launch Blog and on NASA TV. You can stream NASA TV coverage at www.nasa.gov/nasatv.

SpaceX is targeting Sept. 19 for the launch of its next cargo mission to the International Space Station. Launch time is 2:38:44 a.m. Eastern from Launch Complex 40 at Cape Canaveral Air Force Station in Florida The Dragon capsule will fly on a Falcon 9 rocket, both built by the Hawthorne, Calif.-based company. It will carry experiments, supplies and other cargo to the orbiting laboratory where the astronauts living on the station will unload it and put it to use. The Dragon will be loaded with used experiments and other materials no longer needed on the station before it makes its way back to Earth and lands by parachute in the Pacific Ocean.