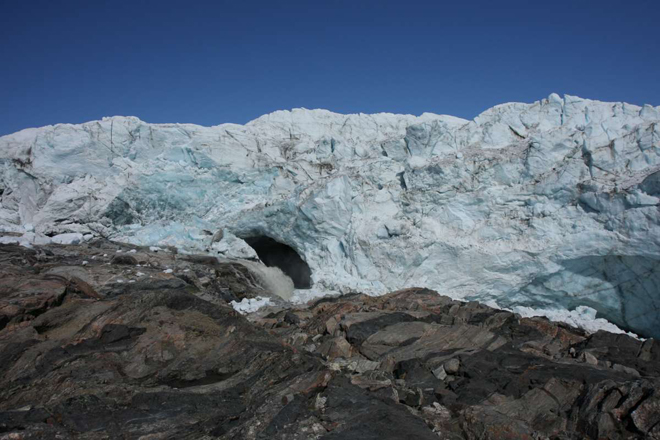 IceBridge scientists spend many days in flight surveying the snow and ice from above. On research “down days,” some scientists use their day off to take in the sights. On Friday, May 14, a group of scientists with Columbia University’s gravimeter instrument — which measures the shape of seawater-filled cavities at the edge of some major fast-moving major glacier — made the trek out to Russell Glacier. In the right place at the right time, the group witnessed a calving event that sent ice cascading down the glacier’s front.

“I took burst speed photos with my Canon 40D and just kept my finger on the trigger until everything stopped moving,” said Eric Renaud, an electronic technician with Sander Geophysics Ltd. “We were lucky to witness it.”

Read more about the group’s trek in a blog post by Columbia University’s Indrani Das, and watch a time-lapse video of the calving event composed by Renaud.

KANGERLUSSUAQ – Kangerlussuaq International Science Support is a red, boxy building that doubles as a laboratory and a hotel for polar researchers. Upon my arrival it was quiet, nearly empty. By the end of the week, however, an influx of scientists staging field expeditions quickly filled the kitchen and halls.

Space is limited, so I share a room with Indrani Das, an ice scientist from Columbia University’s Lamont-Doherty Earth Observatory — the only other woman with the IceBridge team here in Kangerlussuaq. She works with the Gravimeter instrument, which measures the shape of seawater-filled cavities at the edge of some major fast-moving major glaciers.

Das, looking out the P-3’s window on the flight to Greenland’s Helheim and Kangerdlussuaq glaciers, has expertise that reveals a world hidden from my untrained eyes — textures in the ice that disclose, generally, how a glacier is moving.

Das wrote about her experience on the flight May 8, sprinkling her narrative with some glacial facts. Read her post here, on the Lamont-Doherty Earth Observatory’s IceBridge blog.