Editor’s note: This entry was originally posted on the Scientist’s Soapbox, a blog published by the Earth Science System Interdisciplinary Center at the University of Maryland in College Park, Md.

The NASA Operation IceBridge mission began the Arctic 2013 research campaign on Monday 20th March. The mission will survey the Greenland Ice Sheet and sea ice pack of the Arctic Ocean. The NASA IceBridge mission is now in its fifth year and continues to measure Arctic sea ice thickness and snow depth. These data continue the time series of ice thickness measurements begun with NASA’s ICESat in 2003, and will provide a link to the NASA ICESat-2 mission, due for launch in mid-2016.

Surveys are conducted using a specially-equipped P-3B research aircraft (see photo below) that flies above the ice carrying a number of science instruments including radar and laser altimeters, and high-resolution cameras. This year the first flight took place from Thule, Greenland over Arctic sea ice north of the Lincoln Sea, on Wednesday 20th March. IceBridge flew beneath the European Space Agency’s CryoSat-2 satellite, that carries a special radar altimeter known as SIRAL. The mission was designed to fly a gridded-survey beneath the satellite to help validate CryoSat’s measurements over sea ice. The aircraft then transited from Thule across the Arctic Ocean to Alaska on Thursday 21st March. Over the coming days IceBridge will attempt a number of sea ice flights over the Beaufort and Chukchi Seas from a base at Fairbanks International Airport, Alaska. ESSIC’s Sinead Farrell hopes to participate in the first Alaska mission on Friday 22nd March, pending good weather. Dr. Farrell is a sea ice scientist and member of the NASA IceBridge science team. 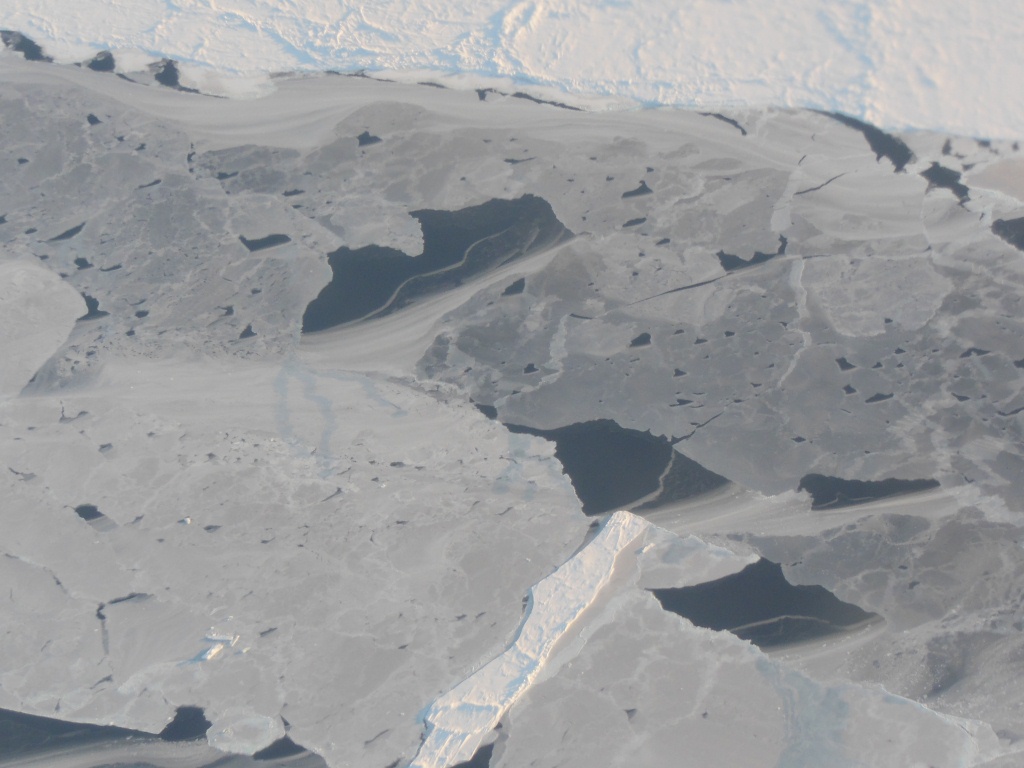 Tuesday 19th March: Arrived in Fairbanks, Alaska on Tuesday to slightly warmer spring temperatures than I had expected. After organizing a rental car, figuring out how to use the engine heating block and the all-wheel drive, I headed for the hotel to unpack and (re)familiarize myself with the locale. The last time I enjoyed an extended visit to Fairbanks was exactly ten years ago, while I was conducting my graduate studies at University College London. Back then I also participated in a NASA airborne campaign over the Chukchi, Beaufort and Bering Seas aimed at validating the NASA AMSR-E radiometer. Things have not changed much in Fairbanks over the years!

Wednesday 20th March: The first in a series of IceBridge science flights was successfully completed on Wednesday. Although the mission was conducted far away over Arctic sea ice northwest of Greenland it was nonetheless a very exciting mission to follow. I was involved in designing a set of gridded flight-lines over the ice such that our airborne survey would provide temporally and spatially coincident measurements with CryoSat-2, while it passed high over-head. This is a technically challenging flight to conduct but things worked out well. The sea ice appeared more dynamic than we had expected, but the number of cracks in the ice, known as “leads”, will actually help in the data analysis aimed at inferring sea ice thickness. While waiting for the IceBridge mission to transit from Greenland to Alaska, I will spend time visiting the International Arctic Research Center (IARC), at the University of Alaska – Fairbanks (UAF). On Wednesday I had the opportunity to meet with some of my colleagues at IARC to discuss on-going and future projects to better understand the diminishing Arctic sea ice pack. I was also able to attend a lecture by Dr. Ron Kwok of NASA’s Jet Propulsion Laboratory on the topic of “Recent Changes in the Arctic Sea Ice Cover: A remote sensing perspective”. Fortuitously there are many national and international sea ice scientists visiting UAF right now to participate in meetings and workshops. Some are even en route to conduct field-work on the sea ice near Barrow, Alaska. Although it’s very cold (-19 degrees Celsius this morning!) and snowing, this is a great time of the year to be in Fairbanks!

Thursday 21st March: Thursday began with the exciting news that the NASA P-3 was en route to Fairbanks. Today’s mission from Greenland to Alaska was flown along what is called the “Laxon Line”. The flight is named in honor of University College London Professor Seymour Laxon. Seymour, my graduate advisor, died tragically 3 months ago. Seymour was a pioneer in the use of satellite altimeters to study sea ice and was the lead sea ice scientist on the CryoSat-2 mission. Today we measured ice thickness and snow depth along a flight line that crosses most of the Arctic Ocean. Thanks to a good tail-wind the P-3 landed one hour early in Fairbanks, right around lunch time. I was really lucky to watch the plane land with my colleagues Jackie Richter-Menge from the Cold Regions Research and Engineering Laboratory (CRREL) and Pam Posey from the Naval Research Laboratory (NRL). Once through customs we met our colleagues off the plane and welcomed them to snowy Alaska!

Friday 22nd March: On Friday we hope to conduct a third sea ice mission over the Arctic, weather permitting. We always need good weather to fly our surveys since clouds can potentially interrupt the measurements we make from the aircraft. We’re particularly interested to see what is happening to the sea ice in the Southern Beaufort Sea this year after the ice pack suffered a wide-spread “break out” event in mid-February. This event caused the ice pack to fragment into smaller floes and become more dynamic. Although these break-out events are not unusual in this region, they do not normally happen in February, the dead of winter. We will provide more updates as the day progresses. 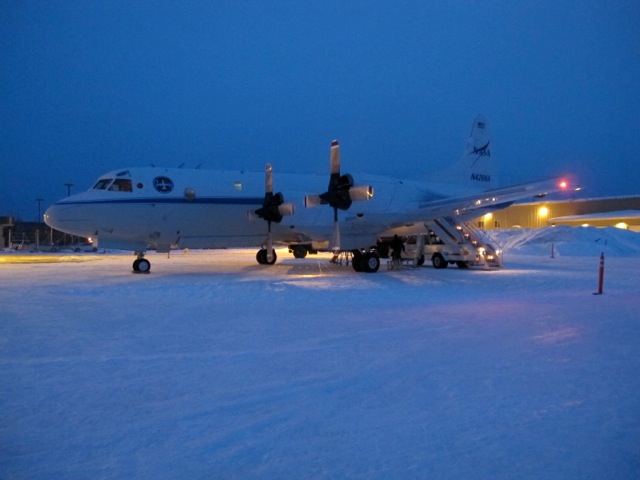 The NASA P-3B on the ramp at Fairbanks, Alaska. Credit: NASA / Jim Yungel

The penultimate sea ice flight to be conducted during phase one of the Arctic 2010 IceBridge campaign was exciting. After days of bad weather and confinement to quarters at Thule Air Base, the flight team was finally able to accomplish the remaining sea ice flights. With only three days left in the campaign, and three sea ice surveys to complete, the pressure was on!

Favorable weather conditions on April 20, 2010, meant that the “Sea Ice 07” flight plan could be attempted. For the ad-hoc sea ice team back home, anticipation was mounting. Several days earlier, on April 8, the European Space Agency (ESA) launched the CryoSat-2 satellite to monitor changes in the thickness of polar ice. By April 11, CryoSat-2’s main sensor — the Synthetic Aperture Interferometric Radar Altimeter (SIRAL) — was turned on and meant that an underflight of CryoSat-2 by the DC-8 and its onboard sensors was possible.

To mitigate against the impact of the drifting sea ice pack, detailed planning and coordination was required to ensure the IceBridge sea ice flight was timed to be coincident with the satellite overpass near-by the North Pole. International collaboration between IceBridge team members at NASA, ESA and NOAA, as well as at a number of academic institutions, ensured the flight was both spatially and temporally coincident with CryoSat-2’s transit across the Arctic Ocean (see map below). 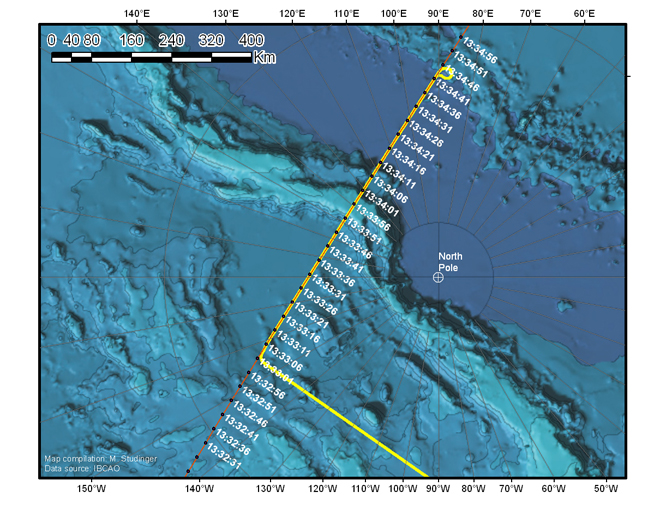 A map of the “Sea Ice 07” flight path, flown on April 20, illustrates the coincident DC-8 flight trajectory (yellow) and the CryoSat-2 orbit (orange) with the times of the satellite over-pass indicated (white). Image is courtesy of Michael Studinger.

Although clouds were encountered en-route to the North Pole, the DC-8 began surveying the CryoSat-2 ground-track just 14 minutes after the satellite passed overhead, in cloud-free conditions. A suite of instruments on the DC-8 including the Land, Vegetation and Ice Sensor (LVIS) and the Airborne Topographic Mapper (ATM) surveyed sea ice elevation along a 465-mile (750-kilometer) CryoSat-2 track at two altitudes: 25,000 feet (LVIS) and 1,500 feet (ATM).

LVIS’s wide swath was particularly suited to capturing the footprint of the satellite’s main sensor. Optical mapping systems, a snow radar, and a gravimeter onboard the DC-8 provided further science data. When analyzed in concert these data provide a valuable baseline for evaluating CryoSat-2’s capabilities for measuring Arctic sea ice thickness.

The flight demonstrated successful collaboration between federal agencies in the United States as well as international cooperation with ESA. Not only did the IceBridge mission carry out the first attempt by aircraft to validate the state-of-the-art radar altimeter onboard CryoSat-2, it contributed to a number of other firsts. The flight marked the most northerly IceBridge survey thus far, utilizing airborne laser and radar altimetry to survey sea ice at a latitude of 88oN. The flight also provided the first opportunity to compare the airborne ATM and LVIS instruments, which use lasers to gather complimentary surface elevation data over sea ice, with a new snow radar system. The sea ice science community looks forward to analyzing the wealth of data gathered during this flight.