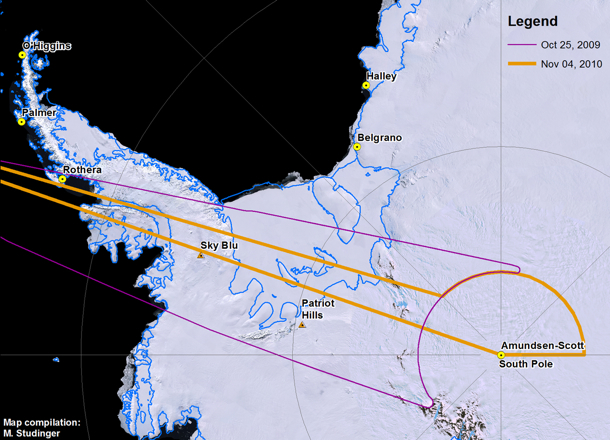 After several days without flights due to unfavorable weather over Antarctica, the Operation Ice Bridge DC-8 is in flight supporting its latest mission. The mission today is the LVIS 86 pole flight. It’s a long 12-hour mission during which the DC-8 will navigate around the South Pole following an arc of -86 deg. latitude at an altitude of 35,000 feet. The South Pole arc will enable NASA’s Land, Vegetation and Ice Sensor (LVIS) to map the surface of the interior of the ice sheet with a 2-kilometer-wide swath, and 25-meter spatial resolution within the swath. This mission will extend the coverage around the pole first collected by LVIS during a 2009 mission. In addition to LVIS, NASA’s Digital Mapping System (DMS) will also be collecting data during this flight. Two other instruments, NASA’s Airborne Topographic Mapper and Kansas University’s MCoRDS radar, typically operate only at lower altitudes, but today both are experimenting with new operational modes and equipment that may allow them to collect data from higher altitudes with LVIS.

The LVIS surface height mapping data provide an important datum to calibrate measurements of ice sheet surface elevation obtained from the Ice Cloud and land Elevation Satellite (ICESat) laser altimeter. ICESat was in a near-polar orbit with the laser altimeter surface profiles densely converging in an arc around the south pole at -86 deg. Therefore, the swath of data LVIS is collecting today, along with that collected in the 2009 pole arc flight, intersects nearly 70 percent of ICESat orbits and provides over a million LVIS and ICESat difference observations for comparison. It’s a unique set of data leveraging the converging satellite tracks around the pole. In addition, the LVIS observations will provide an important datum to monitor long-term interior ice sheet change with respect to current and future near-polar satellite mission data. The DMS and MCoRDS systems complement and enhance the LVIS data by providing high-resolution surface imagery and bedrock topography respectively.

Principal investigator Bryan Blair and scientist Michelle Hofton are running LVIS for today’s mission. Through the magic of technology, lead instrument engineer David Rabine is supporting the mission via xchat while he is on an airplane flying back to the United States after spending the previous three weeks in the field with the instrument. LVIS obtains measurements of surface height using a laser altimeter approach. A laser pulse is transmitted from the instrument, and is reflected back from the surface where the return pulse is recorded. The distance, or range from the instrument to the reflecting surface, is computed as the round trip time of flight of the pulse divided by two (to get the one-way travel time) and then divided by the speed of light. GPS receivers are used to compute the position of the instrument, while the pointing or direction of flight of the laser pulse is determined using instrument orientation data provided by a gyro attitude sensor. The surface elevation for each laser shot can then be computed from these data using the position of the instrument, the direction of the laser pulse travel and the distance or range of the laser pulse travel to the surface. 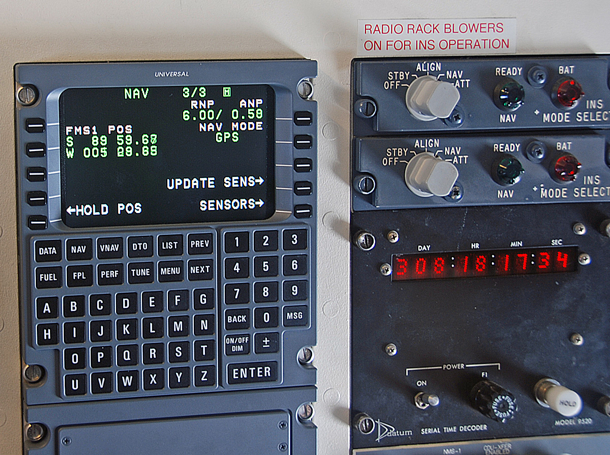 Nearly 30 minutes into the flight the excitement ramped up as the pilots prepared to perform the LVIS instrument calibration maneuver. Everyone took their seats and strapped in. A few minutes later the go was given to perform the maneuver and the airplane pitched up and down several times followed by several rolls left and right, giving us all a roller coaster ride. After a few minutes all was clear and we were back to business.

Now, over six hours into the mission we have completed the data collection for the pole arc and are heading back to Punta Arenas, Chile. On the transit back we flew directly over the South Pole! The mission was clearly a success with mostly clear skies and a full data collection from the instruments. Everyone is looking forward to getting on the ground, having a good dinner, and getting rested up for, potentially, another flight tomorrow. 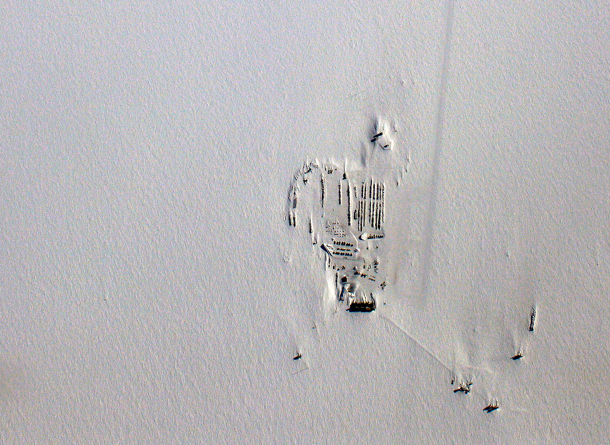 The South Pole Station was easily visible during a flight there on Nov. 4. Credit: Digital Mapping System (DMS) group