Something quite unexpected happened to me during this IceBridge campaign. In fact, something was missing: much of the sense of awe and wonder which I had on my previous three missions was gone. Once there was excitement to see new and inspiring sights, but now there was routine and a sense that I had seen this all before. Despite spectacular views of the polar landscape outside the window of the DC-8 aircraft, I was more often concerned with analyzing data from past IceBridge campaigns than taking time out to look outside.

Bothered by my inability to be moved by my chosen subject of study I forced myself to stare out the aircraft window in hopes that renewed interest would strike. As the silent scenes of the ice scrolled by below me a quote by horror writer H.P. Lovecraft kept running through my head like the background score of a movie: “The oldest and strongest emotion of mankind is fear, and the oldest and strongest kind of fear is fear of the unknown.” After a long bout of reflection I finally realized what the connection was: my sense of awe and wonder wasn’t actually missing, it had simply been hidden away. Only by finding this missing aspect again could I finally experience the renewed interest I was looking for and incorporate this into a deeper respect for the significance of my role as a scientist in the IceBridge mission.

Wrapped in the relative safety of the airplane and content with my knowledge of the physical processes which formed the massive ice sheets around me I had only a vague feeling of missing something. This missing aspect was fear. My familiarity with everything around me caused me to be complacent and lose a healthy sense of fear for the world outside my window. I had become the consummate scientist who fashions the world into nothing more than a series of numbers, equations, and rules. Once the unknown was made known my sense of fear was gone as everything seemed to be explainable according to well-described laws. Such is the dilemma of the scientist: one may be criticized as being arrogant for making sweeping claims of knowledge of unbelievably complex phenomenon, yet possessing a high confidence is also necessary to know that it is indeed possible and correct to make such claims with sufficient data.

This is in stark contrast to my previous experiences flying with the IceBridge mission. In my first flight over the Antarctic sea ice two years ago I felt an indescribable rush of fear and excitement as a vast and remote new world opened up before my eyes. I had never seen anything like it before and felt terrified viewing the harshness of the region. I knew that I’d have little chance to survive if I left the safety of the airplane. I also felt that all of the scientific facts I had read about the polar regions had done little to capture the complexity of everything around me. That I had much to learn before I could properly do my job as a scientist and make broad claims about the state of the polar regions based on the data we were collecting.

Somewhere between these two extremes of fear lies a balance that needs to be attained. Some fear is healthy, it allows one to have humility and respect for forces of nature which are beyond the powers of people to control, but that it is also possible to understand these forces in order to live in harmony with them. Too much fear is unhealthy and can lead to a paralysis of thought and action and distortion of the truth to protect one from an uncomfortable reality. These two extremes of fear seem to define an ongoing conflict between science and society, particularly with regards to the polar regions. In recognizing this, it also gives the potential for scientists to form a bridge between these two conflicting groups. 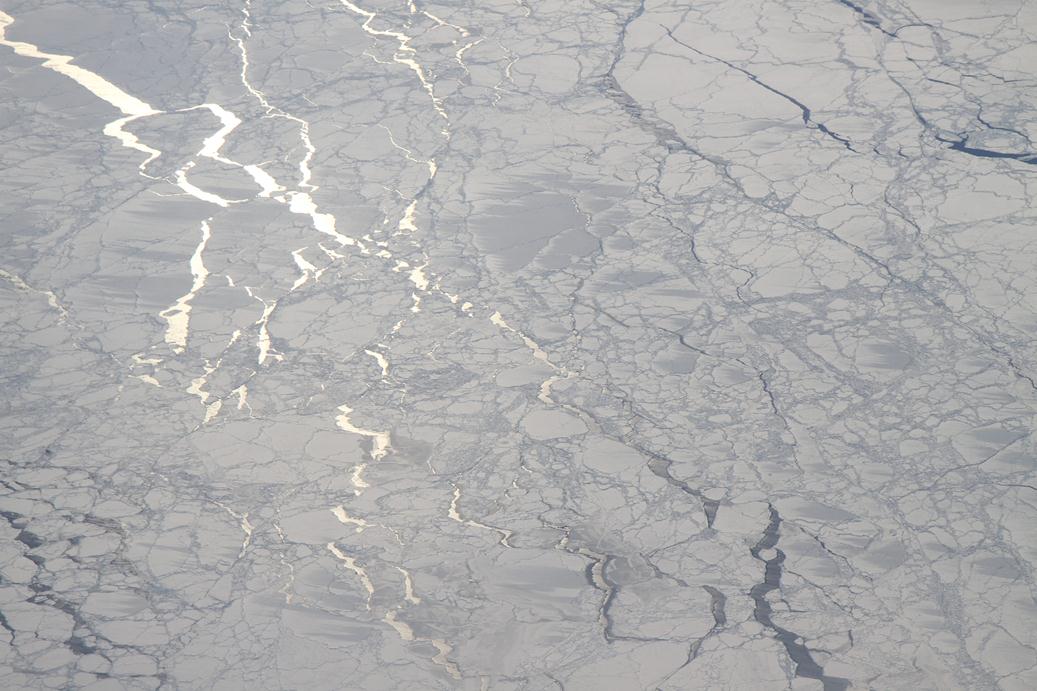 In my experience, most people see the polar regions in a generally negative light, one that is based on fear. Nowhere is this more prevalent than in the arts which are a good barometer (and influential aspect) of the prevailing view of society. Classic writers such as Lovecraft and Edgar Allan Poe wrote stories about the polar regions and portrayed them as places filled with supernatural terrors. This attitude can be seen in contemporary literature as well. For example, popular author George R.R. Martin uses a cold region beyond a great wall of ice as a place where unseen evils lie in wait to tear down a society excessively focused on politics and power games. The artist Edwin Landseer, mostly known for his pleasing pictures of animals, chose to use the polar regions as the backdrop for his controversial painting ‘Man Proposes, God Disposes’ which gruesomely depicts the end of an ill-fated polar expedition. A plethora of horror movies such as The Thing and 30 Days of Night use the polar regions as a setting for tales of terror. These are but a few examples of the negative fear-based depiction of the polar regions in our culture. But is the prevailing view of the polar regions only this and nothing more, a bleak place for us to project our fears?

Aside from only one happy movie (Happy Feet), I can think of positive portrayals of the polar regions mainly in science texts and documentaries. Science is providing (to paraphrase Carl Sagan) a candle in the dark to make a feared unknown into something known. One of these feared aspects is the big question of what changes are happening in the polar regions and to what extent are these changes influencing the global climate. From my own studies of sea ice I have seen large decreases in both the extent and thickness of Arctic sea ice, while the Antarctic sea ice cover has shown a small increase in extent over the last three decades and no statistically significant trends in thickness. Models show that the Antarctic sea ice extent may counter-intuitively increase over the next few decades under a warming climate, but if the warming continues it will begin to decrease again. A decrease in the global coverage of sea ice is expected to cause changes to the global deep ocean circulation as well as increase the amount of absorbed solar radiation which will lead to increased global temperatures. These are simple facts obtained from scientific observations and model physics. Facts such as these are not scary, and if utilized properly they should serve as vital sources of information. Not to paralyze our thoughts in fear, or to give a false illusion of control. But if used with a sense of humility they can be used to promote and guide positive and constructive action.

This is where the IceBridge mission can play a role, and something I realize this trip has inspired me to work towards. Confronting the unknown through exploration and gathering of scientific facts. Presenting the facts as accurately possible is the only way to make the unknown known and unite the world of science with the human element. That is, to allow scientific knowledge to be used as a tool to improve the lives of people. Having spent several weeks with the unique and interesting people that make up the IceBridge mission I am sure that we can do things to the best of our ability. To shine some truth and light on the unknown and work towards getting rid of a climate of fear. 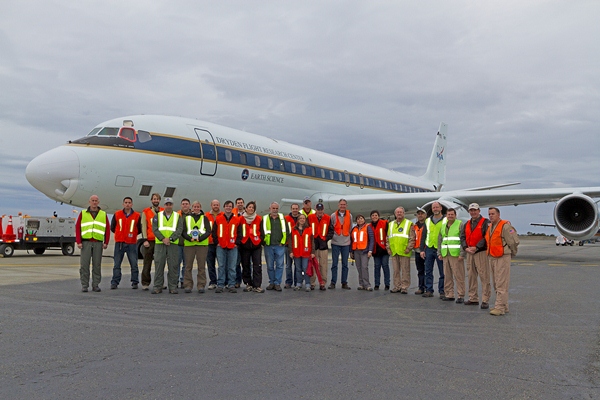 Group photo of IceBridge team in front of the NASA DC-8. Credit: NASA