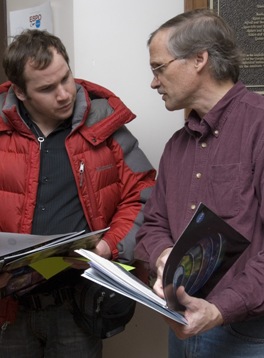 The last time I was on NASA’s big DC-8 “flying laboratory,” I never got off the ground.

It was a bright April day last year in Fairbanks, Alaska. There was fresh snow on the runway and a wind chill of about 0 degrees Fahrenheit. I was helping journalists get behind the scenes of NASA’s airborne campaign to see how air pollution factored into climate changes across the Arctic. The DC-8 was filled with scientists and instruments and reporters – Associated Press, National Public Radio, the Fairbanks Daily News-Miner – on our media tour of the plane at the city’s airport. (In the photo, I’m the helpful one on the right.)

That’s what we do in NASA’s Office of Public Affairs: help get the word out to the press and public about the cutting-edge science, technology, and exploration that U.S. taxpayers sponsor through our civilian space agency. My slice of NASA is the Earth Sciences Division. Although I usually work this beat from behind a desk, once in a while I get to head outside when NASA launches a new Earth-observation spacecraft or takes to the field to do some science.

Now I’m no scientist (English major, thank you), but I’ve been writing about what scientists do for over 20 years. What fascinates me about the whole endeavor is the ingenious ways these men and women find to see things that haven’t been seen before. Who has seen a continent-sized ice sheet change before? I mean, how do you do that? Well, they find a way.  It’s an amazing and fun thing to watch.

And with Operation Ice Bridge, I might finally be able to watch scientists doing their work from the air. The DC-8 flight managers tell me there should be enough spare seats for reporters and public affairs types like me to fly along over Antarctica. If that works out, I’ll be sharing the experience with you using the new media tools we now have available: Twitter, YouTube, Flickr, and this blog.

One thought on “Getting You Behind the Scenes”