“We’re really pumped. We’re getting some really good data,” says Chris Allen from the University of Kansas about midway through the 11-hour flight. The electrical engineering professor and four graduate students are operating three different radars developed at the university through the National Science Foundation Center for Remote Sensing of Ice Sheets.

Chris Allen at the controls of the MCoRDS radar, over Antarctica. (Jill Hummels/University of Kansas)

“A while back, we were over the ice shelf, and it was very distinct.” Now, as the plane progresses over the land formation, the vibrant multicolored display offers less clear information. But the raw data is still being captured. “That’s where the signal processing comes in,” Allen says. 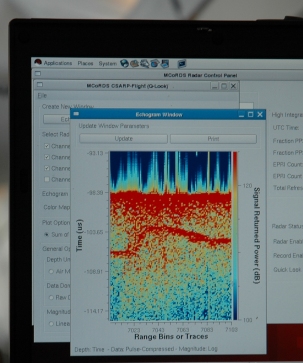 The display offers a cactus-like spectrum of color, with spikes protruding from separate layers of color. The uninitiated eye can clearly see a “surface” in the image. That would be the top of the ice layer, Allen explains. The more trained eye knows that where the yellow, aqua and blue colors intermingle is where the real action lies. More sophisticated methods will be needed to coax meaning from the raw data.

Already the Kansas team is eliciting “oohs” and “ahhs” from other science team members through data they’ve collected with the MCoRDS radar in the mission’s two previous flights.  In a recent evening briefing at the hotel in Punta Arenas, an image being displayed for all to see appeared to show that in one inland area of Antarctica the ice sheet is several kilometers thick and is nestled in a channel of bedrock that appears to be well below sea level.

Five hours after today’s flight started, the plane has gone through several passes over the glacier and still has many more to go. The proscribed flight path — called “mowing the lawn” — includes 11 parallel lines and a couple perpendicular ones. Each parallel path is about five miles apart. However, the flight crew skips the adjacent path in order to comfortably make the wide turn to the next run. A couple “teardrop turns,” wider turns that loop back nearly 360 degrees to a narrower path, have been thrown in for good measure to ensure the science and engineering teams are on the exact positions they need.  It also helps break the monotony of flying over endless tracks of white.

Even after the flight crew has maneuvered the DC-8 through its perpendicular labyrinth and is making the long stretch home across the Antarctic Ocean, the Kansas team will still be hard at work crunching numbers and distilling hard truths from the icebergs of raw data.  With significant computing power aboard the plane, the team has made it a goal to try to deliver detailed information about ice sheet thickness and more by the time the plane lands in Punta Arenas.

The DC-8’s flight plan (dark lines) and actual flight paths (red lines) mid-way through the “mowing” of Pine Island Glacier. (Pine Island Bay is on the left side of this image.)

One thought on “Mowing the Lawn at Pine Island Glacier”