From: Seelye Martin, University of Washington 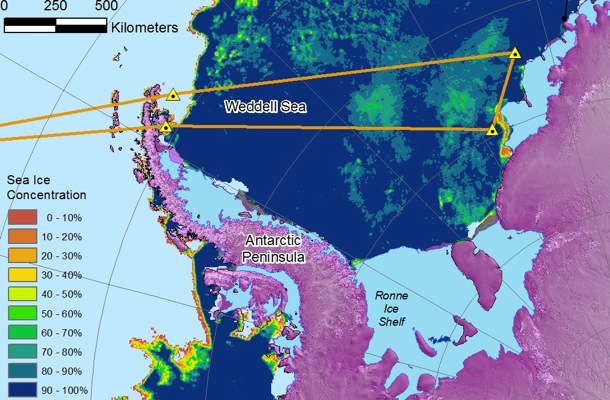 The Weddell Sea mission is a pair of lines repeated from last year that extend across the sea ice from the tip of the Antarctic Peninsula to south of Cape Norvegia, and back again (see above). The flight path crosses the tip of the Peninsula, then proceeds on a long straight line to the eastern Weddell Coast, transits down the coast about 200 nautical miles, then transits back, where the sea ice coverage is at 1,500 feet. The primary instruments will be the ATM to measure sea ice freeboard and the snow depth radar for snow depth on the sea ice.

The past five days have been very difficult, in that the weather has been poor, with low clouds or storms over all of our sites. This was stressful for all of us, in that on the previous evening, we would choose a potential target, then get up at 5:00 am local, transit to the airport at 6:30, get to the airport at 7, stare at maps and imagery until 7:30, then consult with the weather office until 8 am. At this point, we would discover the weather was so marginal that we were forced to cancel. But today our forecasts showed a high pressure system over the Weddell Sea, the Chileans said go, so we flew the mission. This is the first in a series of 14 flight plans.

In this mission, our first problem involves the production of accurate weather forecasts. To produce these, we use the following sources: First, the Antarctic Mesoscale Prediction System, which at 00 and 12 UTC, produces a five day forecast at 3-hour increments. This forecast in particular shows the location and height of the cloud layers. Second, the satellite imagery acquired by the NASA Rapidfire system, pressure field forecasts from the European Center for Medium Range Weather Forecasting (ECMWF) and the expertise of Chilean Airport Meteorologists. So what’s the weather like down here? Imagine a circular icecap centered at the South Pole. Under these conditions, there would be a high pressure system over the ice cap, and a series of lows moving around the cap. Now add the Antarctic Peninsula to the icecap, a 4,000-meter-high barrier extending 700 nautical miles toward South America. The lows still rotate around the continent, but now the peninsula causes the lows to stall in the Bellingshausen Sea. This creates the bad weather for the critical region around Pine Island Bay. For the Weddell, this is the first open day since we arrived, and we hope that the mission is free of low clouds. 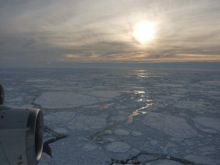 A second problem involves the avoidance of bird and seal colonies. Low overflights stress the birds and seals; so we need to stay 4,000 feet away from the colonies in the vertical, or 1 nautical mile in the horizontal. We are making every effort to avoid the colonies, many of which are concentrated along our path in the northern peninsula.

A third problem involves the snow depth radar. This is an innovative radar from the University of Kansas, that measures snow depth on sea ice. Last year, the transmit and receive antennas were located adjacent to one another in a fairing attached to the belly of the plane. This year, to improve performance, the receiving antennas were relocated to compartments in the wing roots, one each on each side. The relocation of these antennas involved having a contractor replace the aircraft aluminum panels with a radar transparent material, which is used instead of the aluminum panels, with the antennas mounted behind. The radar is now more sensitive, but it has yet to be tested over sea ice, something we had hoped to do on an earlier flight, so we need to allow for roughly half an hour to take data at low elevations, then analyze it, to make sure that the instrument is working properly before taking data along the line. Having this instrument work will improve the accuracy of the snow depth retrieval. So, weather, penguins, snow radar, all must all be considered for a successful flight.

Here is the timeline of the mission:

1030: We are approaching the peninsula, still at high altitude. Islands are just coming into view, poking up above the clouds, this would be Greenwich Island, straight ahead. Cloud deck is below us, clouds should clear as we cross the peninsula.

1110: Cleared peninsula, avoided penguin colonies, sea ice is visible straight ahead, dropping our altitude to 1,500 ft. Someone just handed me a paper towel, they are concerned about possible precipitation inside the plane as we descend.

1115: Transiting sea ice edge. small broken floes, sunlight on ice. Surface temp from infrared radiometer is about -2 C. It is warm and sunny out here.

1146: Surface temp as low as -6C, we have good snow. Ice consists of large floes surrounded by open water, occasional nilas (thin ice). Small icebergs visible in distance. This is wonderful flying, horizon visible in all directions, blue sky above. Very different than last year. Gives some faith to the forecast.

1217: Intermittent cloudiness, now appears to be sharpening up. Pilots do not want to go below 1,000 ft. Now it is really clear again, a whole lot better.

1225: Winds up to 25 kts at right angles to the plane, Langmuir streaks in water. Winds should blow the clouds out of here. Ben reports that the snow radar is working.

1318: Clouds at horizon, 2 hours to the coast. Ice and blue sky still present.

1350: We are about an hour out from the eastern Weddell coast.

1413: Clear again at surface, but overcast overhead. 26 minutes to end of line. Losing the horizon. Turbulence, socked in again, no, I can still see the surface. These cloudy interludes are pretty intermittent. Can sort of see the horizon. Ben reports from early processing of snow radar, 75 cm of snow depth near the peninsula.

1435: Approaching the coast for our turn south. Then about 200 nm on the southern leg, then head back to the peninsula.

1440: Begin turn to the southwest. This is about as close as we will get to the eastern Weddell coast, the British station Halley Bay is off here somewhere, looks like we are on the new trajectory. We are in a heavy haze, but surface is still visible. Good surface visibility.

1530: Just finished traverse along the Brunt ice shelf, very beautiful as we came out from under a cloud deck.

1552: On return track to the tip of the peninsula, good surface visibility but hazy.

1700: Perfect weather on the return line, just heard from pilots that they can finish the line at 1,500 ft. Our low altitude airspeed is 250 knots.

1840: 15 minutes out from waypoint marking the end of the line. We can just about make out the Antarctic Peninsula. Ice is thicker adjacent to the peninsula, this is where the second year ice occurs in the Weddell Sea. The tabular icebergs we are seeing out here probably calf off the Ronne/Filchner Ice Shelves.

1850: Reached waypoint, starting to climb for home, at a sufficient altitude to avoid the penguin colonies.

One thought on “A Sea Ice Mission Over the Weddell Sea”