Looking back, I’m extremely happy that my second time on the IceBridge mission to the Antarctic was a much more intense experience than my first. Last year bad weather kept us grounded quite often and I was limited to going on three flights over the vast extent of sea ice that surrounds the continent. But this year we hit the ground running, well, flying I should say. There were many more flights, more thrills, more snow, more ice…or was there more snow and ice? In fact, one of the main goals of the IceBridge project is to find out whether the Antarctic is gaining or losing ice. While some regions are gaining ice and others are losing it, the question remains as to whether the sum of the parts is in balance. More importantly, how will the southern polar ice cover drive and respond to changes in the climate? How will these climate impacts affect humanity? 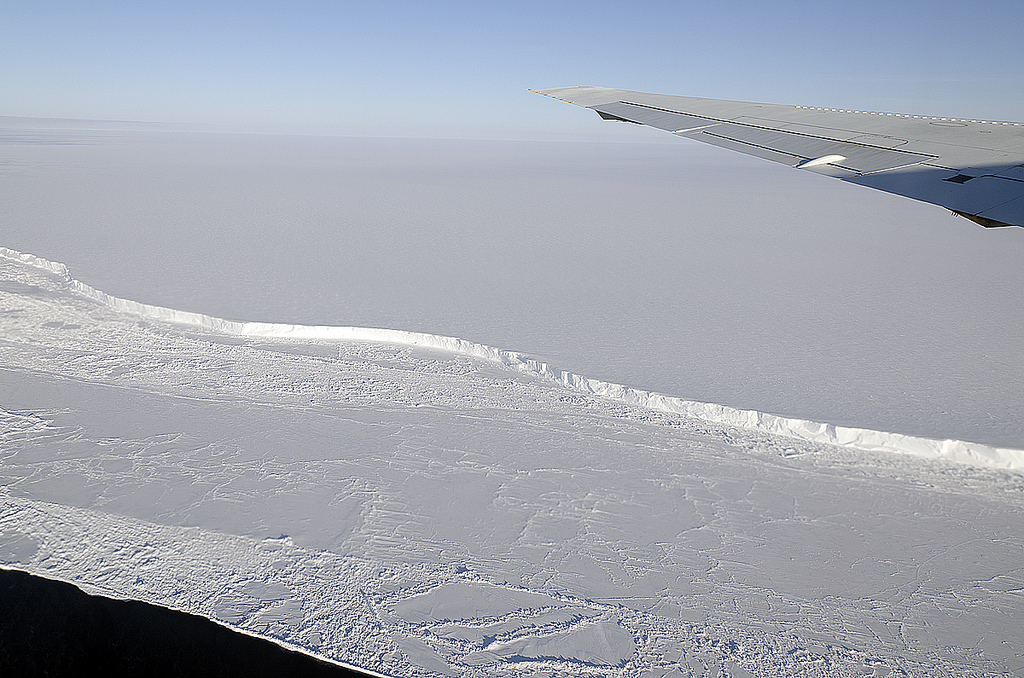 An apron of sea ice floats in front the Brunt Ice Shelf, seen on the first flight of the Antarctica 2011 campaign. Credit: Michael Studinger/NASA

With these questions in mind the DC-8 airplane used for IceBridge launched tirelessly day after day to provide some answers. The plane was loaded with instruments to get a unique look from the air that we cannot get with our eyes and hands. It’s amazing for me to think about what great things just a bit of electricity powering the scientific instruments can accomplish (not to mention the massive amounts of coffee apparently fueling the instrument operators). Some electricity fed through an antenna mounted on the aircraft wings produces a radar pulse that can tell us how thick the snow is beneath us. Electricity through a different antenna produces a radar pulse that can tell us how thick the ice is. While even more electricity fed other instruments such as the lasers, gravimeter, and the often-times spectacular photography of all the beautiful areas we pass over. 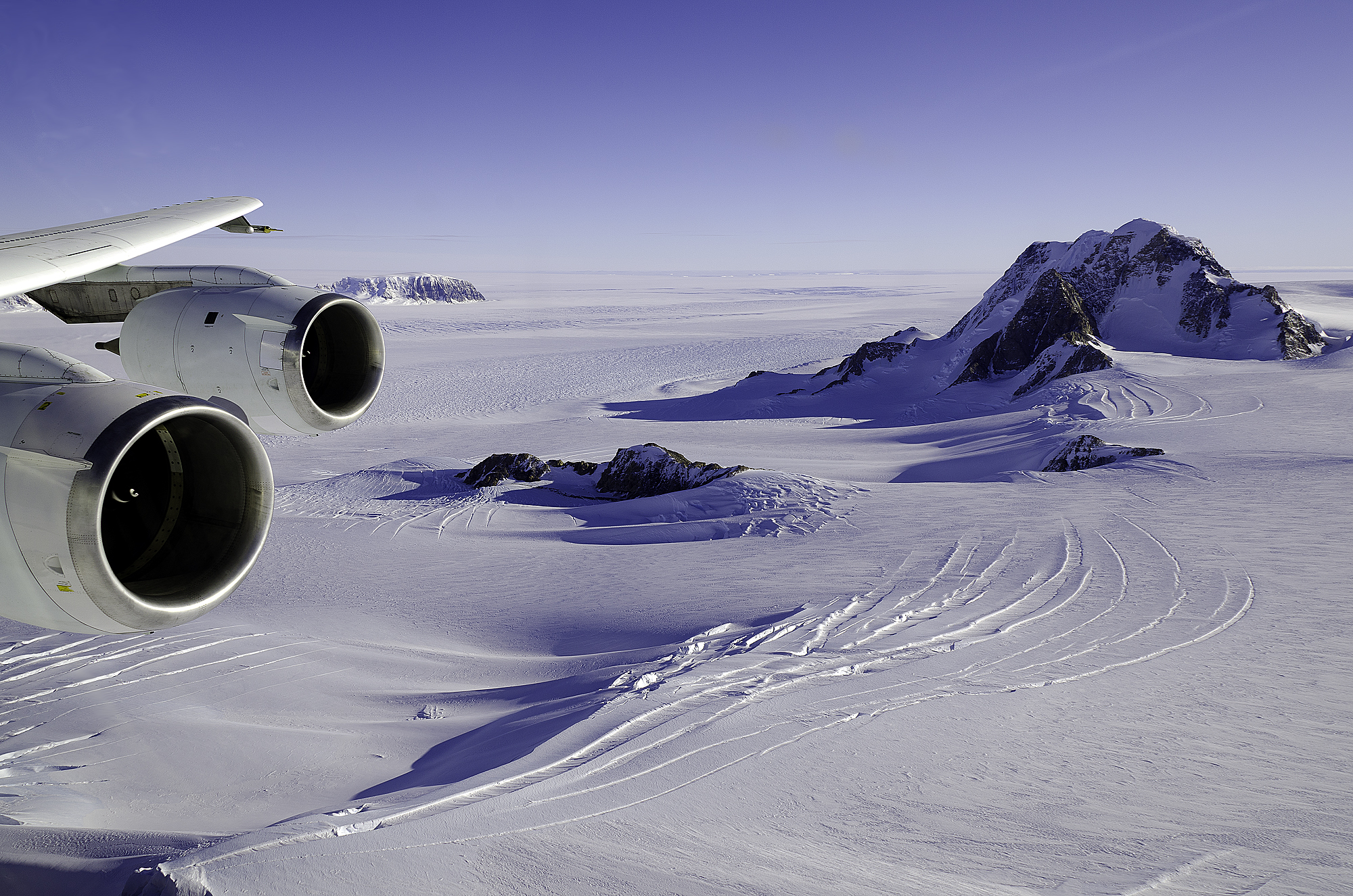 With all that sensitive equipment loaded on the plane our next step was to fly over interesting areas to measure. We started out with flights in the Weddell Sea to measure the thickness of the sea ice surrounding the Antarctic continent. Antarctic sea ice is a fantastic sight to behold as the strong ocean dynamics in the region create a wide variety in the types of structures that we see. Like a snowflake, no two views of the sea ice are ever the same. In some areas the ice is very consolidated with the ice floes constantly crashing into each other and creating human-sized ridges. In other areas the ice has moved apart, exposing the ocean to the cold polar air and creating intricate geometrical structures as the water freezes and gets stirred together by the wind and ocean.

It is freezing and dynamic processes such as these which determines how much sea ice there is surrounding the Antarctic continent. As a scientist, one of my goals is to use the data collected during these flights to determine how the sea ice is changing and if so, what is causing the changes? How will these changes in such a remote area impact the world at large? It is thought that changes in the sea ice cover will have a large impact on the global temperature by changing the amount of solar radiation absorbed by the Earth. But presently it is not well known how changes in the global temperature will affect the Antarctic sea ice cover. While one may expect warmer temperatures to reduce the amount of ice, it is also possible that complex feedback mechanisms between the ocean and atmosphere could cause the Antarctic sea ice cover to increase with a warming climate. Connecting the observations taken during these IceBridge flights to those from satellites over the past decade will be critical to determining what factors have and will play a part in impacting the ice. While it will take some time to understand what the IceBridge measurements are showing us, there are high hopes for learning a great deal from what has been done. 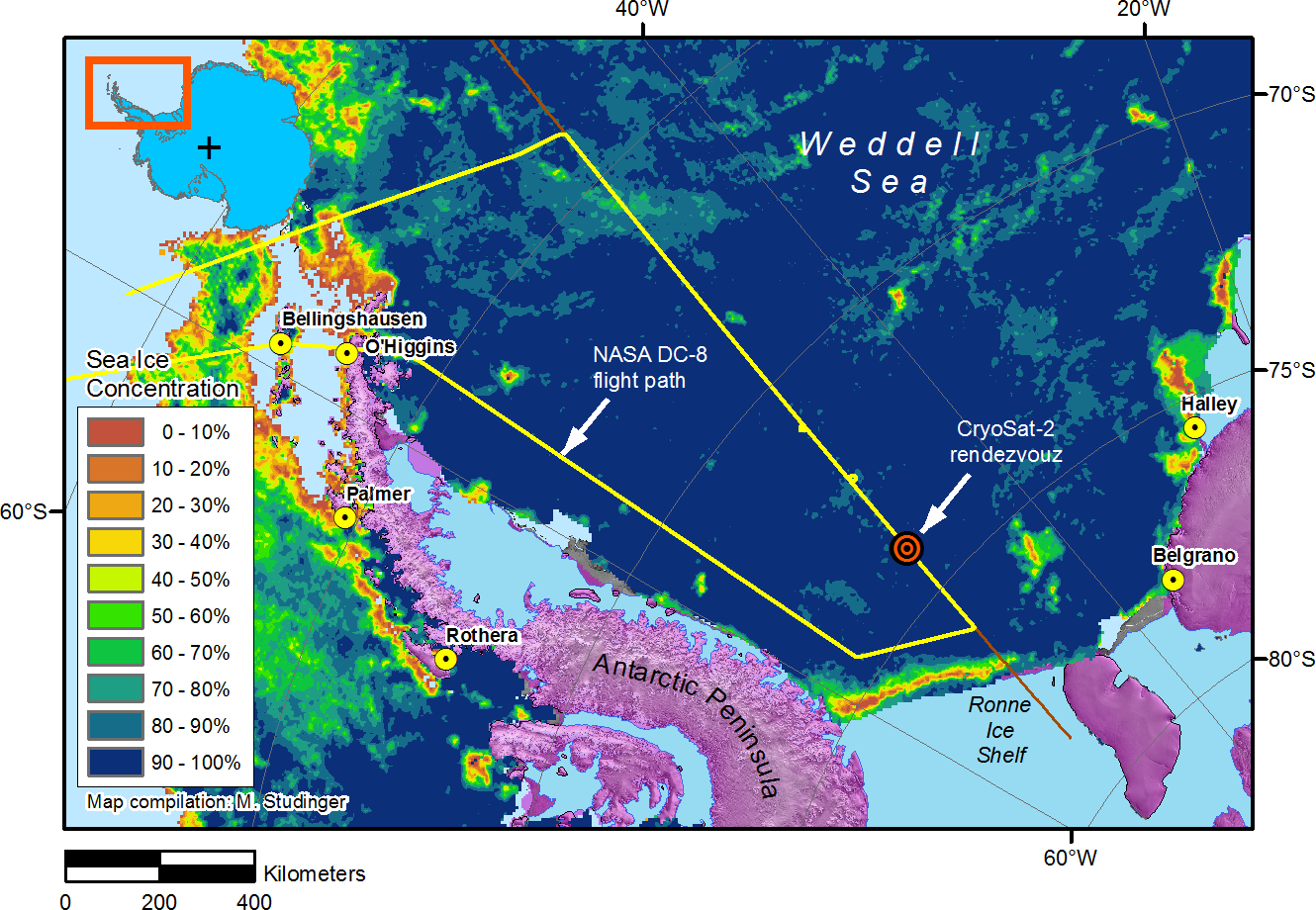 While on my previous flights over sea ice with IceBridge we would often fly near the great ice shelves surrounding the Antarctic continent. To me, the great white ice sheets always looked foreboding, as if they were waiting to swallow up the airplane if we dared venture too far into the interior of the continent to spy on its secrets. This year during my first land ice mission to Pine Island Glacier I half-expected something terrible to happen as soon we crossed the threshold from the ocean to the continent. Thankfully, the plane held a steady pace as if it had absolutely no concern for where it was going. In fact, the plane ended up dutifully flying all over the continent carrying me to some of the most remote and hostile environments on the planet. On the way I saw desolate islands buried in ice, giant crevasses, flew perilously close to lonely mountains with peaks just barely reaching up from the 1+ mile thick sheet of ice covering the land, and so much more. But it didn’t seem scary at all, in fact it was quite beautiful! Well, from 1500 ft above the ground everything looked beautiful. At times, the sensors in the plane showed surface temperatures below -50 F and winds blowing at more than 60 mph. Blowing snow was easy to spot with such strong wind. Perhaps not such a cheery and inviting environment to visit, but perched safely on the plane it was easy to appreciate the splendor of the world below. Interestingly, the map display on the plane showed nothing but an ominous black void beyond 80 degrees latitude, the edge of the world apparently. But the mapmakers have it wrong. While the bottom of the world is certainly a vast abyss, it is of white snow and ice rather than a black nothingness.

Given the enormity of the sheet of ice covering Antarctica it’s hard to imagine that changes could also be happening to it. Yet, as I’ve learned many times throughout my experience with IceBridge, it takes sophisticated instruments to learn what is really happening there. With many more flights to go, and countless more hours spent by scientists looking at the instrument data, we will hopefully find out soon enough.