Boeing put Starliner’s parachutes to the test again on June 21 as part of a supplemental reliability campaign designed to further validate the system’s capabilities under an adverse set of environmental factors.

Boeing is developing the Starliner spacecraft to take astronauts to and from the International Space Station in partnership with NASA’s Commercial Crew Program.

This latest balloon drop, conducted high above White Sands Space Harbor in New Mexico, demonstrates Starliner’s parachutes continue to perform well even under dynamic abort conditions and a simulated failure. Boeing and NASA jointly developed the conditions for this test as part of a comprehensive test campaign to demonstrate Starliner parachute performance across the range of deployment conditions.

Teams wanted to be sure that if an abort were to occur early into launch, certain parachutes in Starliner’s landing sequence would inflate correctly despite needing to deploy in significantly different flight conditions than those seen with normal landings.

“Parachutes like clean air flow,” said Jim Harder, Boeing’s flight conductor. “They inflate predictably under a wide range of conditions, but in certain ascent aborts, you are deploying these parachutes into more unsteady air where proper inflation becomes less predictable. We wanted to test the inflation characteristics at low dynamic pressure so we can be completely confident in the system we developed.”

This critical test phase began six seconds into the drop when small parachutes designed to lift away Starliner’s Forward Heat Shield deployed successfully. Ten seconds later, the vehicle’s two drogue parachutes followed suit, inflating perfectly despite the low dynamic pressure. But the Starliner boilerplate wasn’t out of the woods yet.

Test teams added a fault scenario to the test objectives by preventing one of Starliner’s three main parachutes from deploying altogether. At 98 seconds into flight, just two pilot chutes were fired resulting in only two of the three main parachutes deploying. Despite the higher loading, Starliner’s parachutes performed effectively, bringing the test article down to Earth safely and slowly about two-and-a-half minutes later.

The data extracted from this test will be utilized to improve the reliability of the Starliner parachute system ahead of crewed flights and be shared with NASA for their own vehicle use.

“Our parachute system is very similar to the design NASA uses to bring humans safely back from the Moon. Turns out, we can use some of their test data to model our mission scenarios, and they can use a lot of our data to model theirs,” said Starliner test manager Dan Niedermaier. “It really is all about the data. The more you have, the more accurate your models will be. This shared approach helps to keep both systems incredibly safe.”

During the summer, Boeing and NASA will continue to test Starliner’s parachute strength, building out even more reliability on a system that’s already shown to be consistently robust.

“Our parachutes have passed every test.” Niedermaier said. “We continue to push our system because we know what’s at stake. This demanding test program ensures Starliner can bring our astronauts home safe.”

NASA’s Commercial Crew Program is a public-private partnership combining NASA’s experience with new technology and designs pioneered by private industry to make space travel safer and available for all. This test is one of many steps that advances NASA’s goals of returning human spaceflight launches to U.S. soil on commercially-built and operated American rockets and spacecraft, preparing for a human presence on the Moon, and ultimately sending astronauts to Mars.

NASA astronauts Chris Cassidy and Robert Behnken concluded their spacewalk at 1:39 p.m. EDT, after six hours and seven minutes. The two NASA astronauts completed all the work planned for this first of four spacewalks to replace batteries that provide power for the station’s solar arrays on the starboard truss of the complex as well as initial tasks originally planned for the second scheduled spacewalk next Wednesday. The new batteries provide an improved and more efficient power capacity for operations.

Cassidy and Behnken are scheduled to complete the upgrade to this initial power channel in a second spacewalk on July 1, during which they will install one more lithium-ion battery and one more adapter plate and remove the sixth nickel-hydrogen battery that will no longer be used. 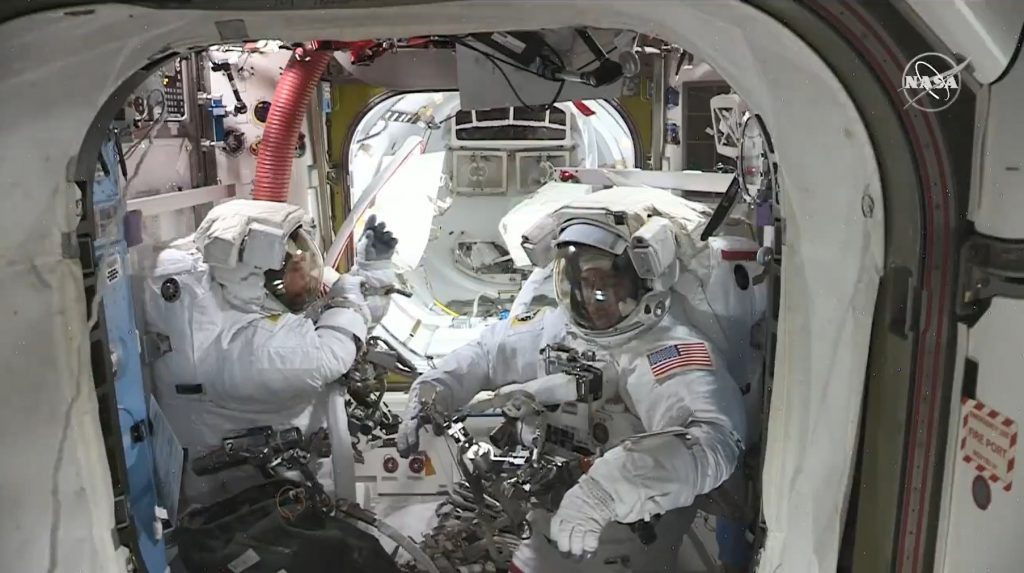 NASA astronauts Chris Cassidy and Robert Behnken have begun the first of two scheduled spacewalks to replace batteries on one of two power channels on the far starboard truss (S6 Truss) of the International Space Station.

The spacewalkers switched their spacesuits to battery power at 7:32 a.m. EDT to begin the spacewalk, which may last as long as seven hours.

Watch the spacewalk on NASA TV and on the agency’s website.

NASA Administrator Jim Bridenstine on Friday selected Commercial Crew Program Manager Kathy Lueders to be the agency’s next associate administrator of the Human Exploration and Operations (HEO) Mission Directorate. Since 2014, Lueders has directed NASA’s efforts to send astronauts to space on private spacecraft, which culminated in the successful launch of Demo-2 from the Kennedy Space Center in Florida on May 30.

Lueders began her NASA career in 1992 at the White Sands Test Facility in New Mexico where she was the Shuttle Orbital Maneuvering System and Reaction Control Systems Depot manager. She later moved to the International Space Station Program and served as transportation integration manager, where she led commercial cargo resupply services to the space station.

She also was responsible for NASA oversight of international partner spacecraft visiting the space station, including the European Space Agency’s Automated Transfer Vehicle, the Japan Aerospace Exploration Agency’s H-II Transfer Vehicle, and the Russian space agency Roscosmos’ Soyuz and Progress spacecraft. She went to Kennedy as acting Commercial Crew Program Manager in 2013 and was selected as the head of the office in 2014.