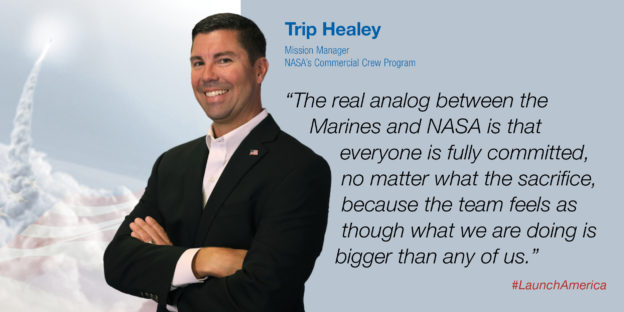 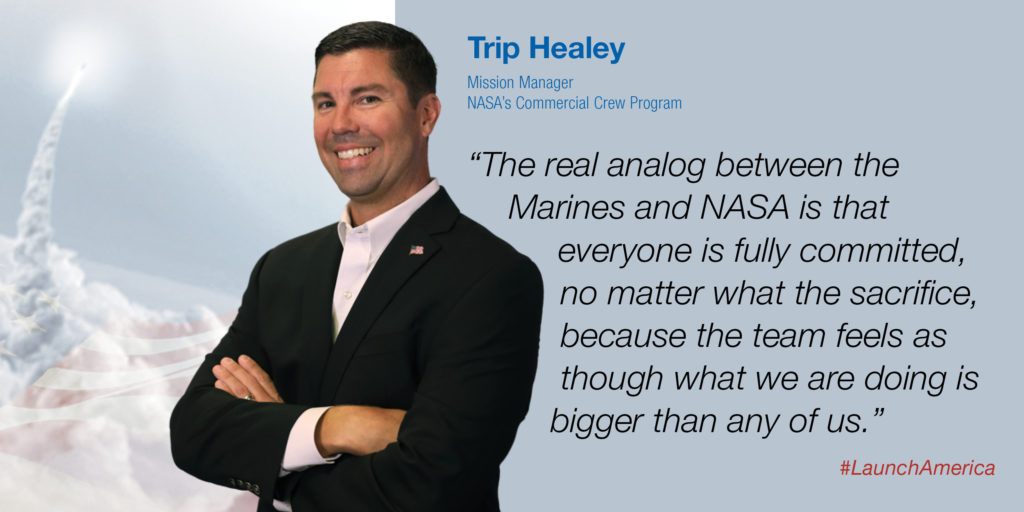 A successful space mission requires the coordinated efforts of human spaceflight experts, working thousands of hours, to come together at just the right moment – not only on launch day, but months and even years ahead of time.

For one Marine veteran, tapping into his military background to coordinate those fine details is part of the fun and accomplishment he sought when he came to NASA.

“I am a Marine, and as a Marine it’s all about mission accomplishment, taking care of your troops, and getting the job done,” said Trip Healey, mission manager for NASA’s Commercial Crew Program at Kennedy Space Center in Florida. “I think that background helps me in my position here.”

The role of a mission manager is to facilitate collaboration between NASA and the commercial providers, and ensure the requirements and processes necessary to conduct a successful flight are in place and ready prior to the flight. Healey is one of two mission managers assigned to Boeing. He will manage Boeing’s uncrewed flight test and first crew rotation mission from a NASA perspective, while his teammate in Houston will manage the company’s crewed flight test and second crew rotation mission. Read the full story at http://go.nasa.gov/2kjLBR6 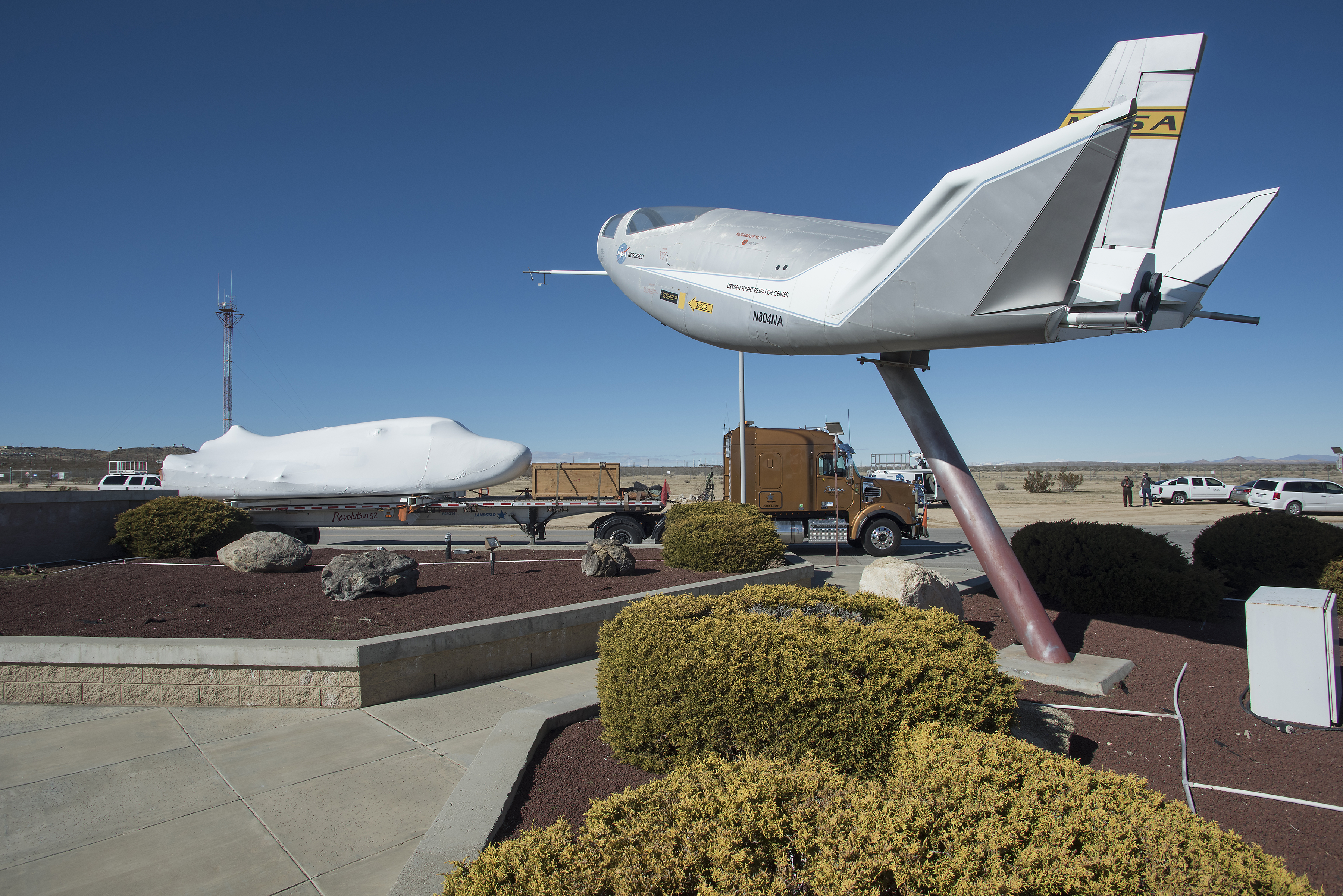 Sierra Nevada Corporation delivered its Dream Chaser spacecraft Wednesday to NASA’s Armstrong Flight Research Center in California, located on Edwards Air Force Base. The spacecraft will undergo several months of testing at the center in preparation for its approach and landing flight on the base’s 22L runway. 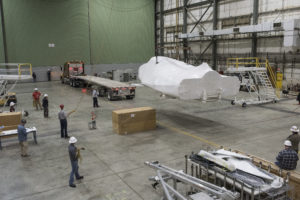 The test series is part of a developmental space act agreement SNC has with NASA’s Commercial Crew Program. The upcoming test campaign will help SNC validate the aerodynamic properties, flight software and control system performance of the Dream Chaser.

The Dream Chaser is also being prepared to deliver cargo to the International Space Station under NASA’s Commercial Resupply Services 2 (CRS2) contract beginning in 2019. The data that SNC gathers from this test campaign will help influence and inform the final design of the cargo Dream Chaser, which will fly at least six cargo delivery missions to and from the space station by 2024. 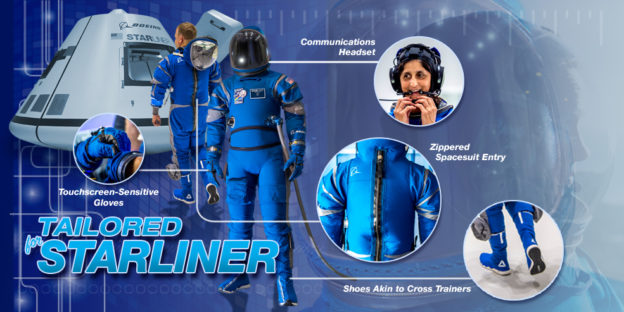 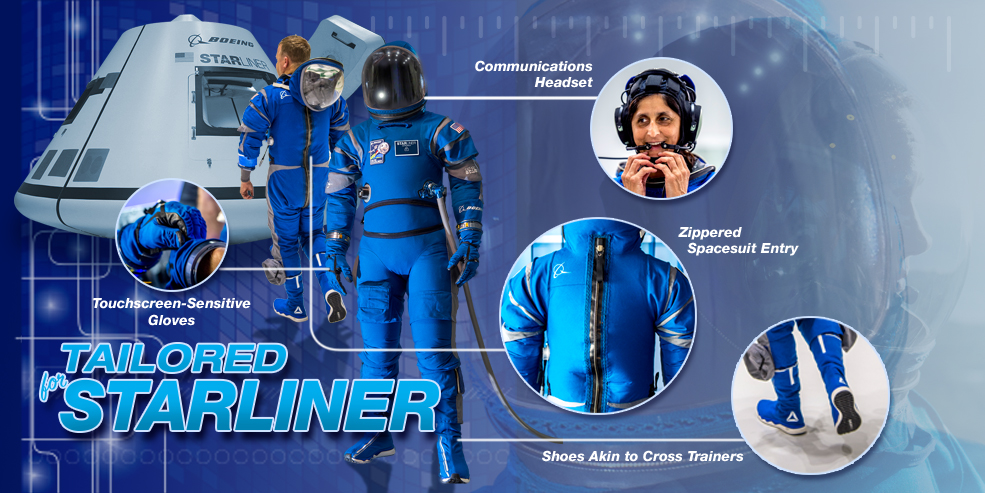 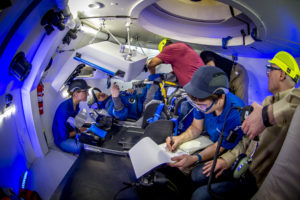 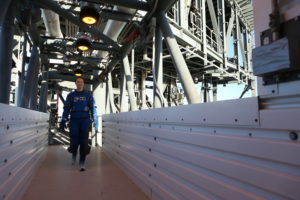 Astronauts heading into orbit aboard Boeing’s Starliner spacecraft will wear lighter and more comfortable spacesuits than earlier suits astronauts wore. The suit capitalizes on historical designs, meets NASA requirements for safety and functionality, and introduces cutting-edge innovations. Boeing unveiled its spacesuit design Wednesday as the company continues to move toward flight tests of its Starliner spacecraft and launch systems that will fly astronauts to the International Space Station.

The full suit, which includes an integrated shoe, weighs about 20 pounds with all its accessories – about 10 pounds lighter than the launch-and-entry suits worn by space shuttle astronauts.

The new Starliner suit’s material lets water vapor pass out of the suit, away from the astronaut, but keeps air inside. That makes the suit cooler without sacrificing safety. Materials in the elbows and knees give astronauts more movement, too, while strategically located zippers allow them to adapt the suit’s shape when standing or seated.

“The most important part is that the suit will keep you alive,” astronaut Eric Boe said. “It is a lot lighter, more form-fitting and it’s simpler, which is always a good thing. Complicated systems have more ways they can break, so simple is better on something like this.” Read more details at http://go.nasa.gov/2kjNjQ0  Photo credits: middle by Boeing, lower by NASA/Cory Huston 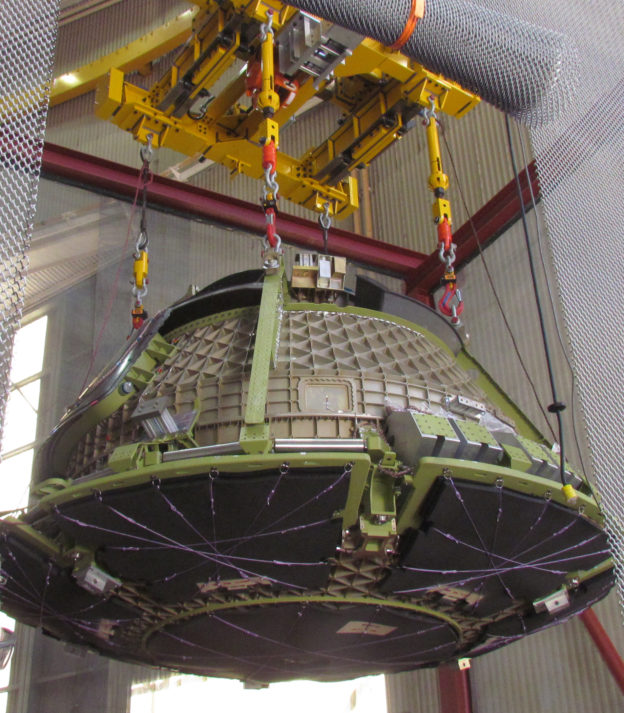 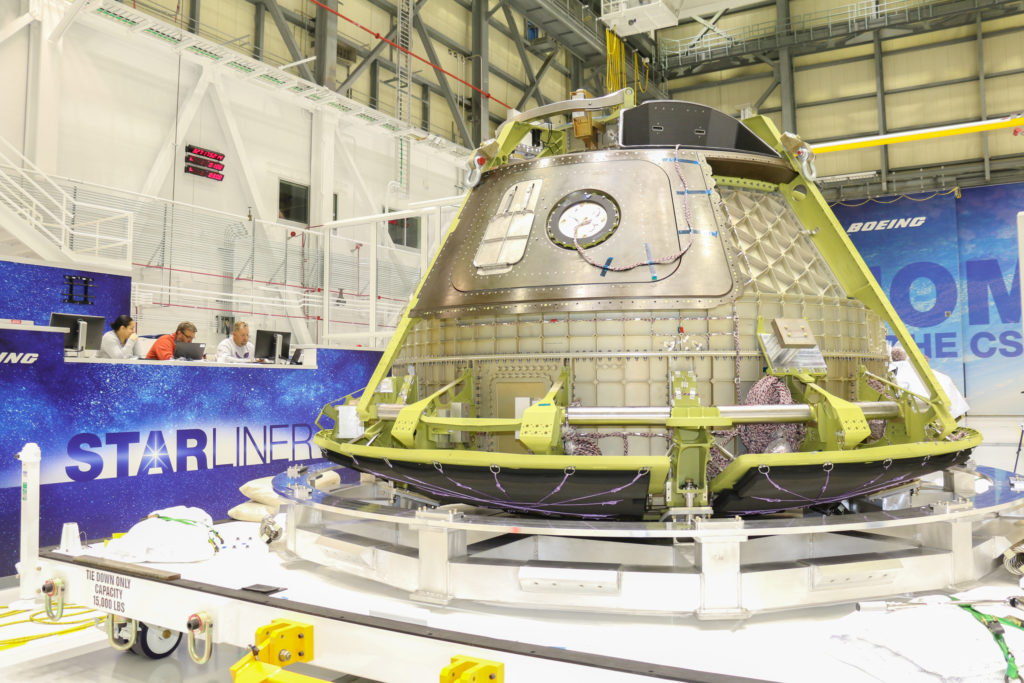 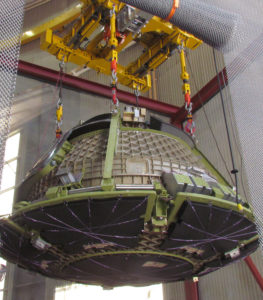 Boeing’s Starliner spacecraft will experience a variety of tremendous internal and external forces during missions to and from the International Space Station.  When the Starliner launches in 2018, it won’t be the first time the spacecraft has encountered these forces. That is because Boeing built a Structural Test Article that will experience the rigors of spaceflight in a test facility in an effort to prove the design of the spacecraft. The module was built inside the company’s Commercial Crew and Cargo Processing Facility at NASA’s Kennedy Space Center in Florida (top) before it was shipped it across the country to Huntington Beach, California, for testing (right). 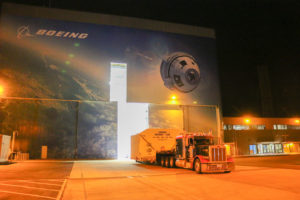 It joined test versions of the service module, the launch vehicle adapter truss structure and other hardware that make up the upper stage of the United Launch Alliance Atlas V rocket. Testing of the article began shortly after it arrived to Boeing’s Test and Evaluation facility. The first test involved pressurizing the interior of the crew module to 1.5 times the maximum pressure a Starliner spacecraft would face during ascent, orbit, re-entry and landing for missions to and from the International Space Station. 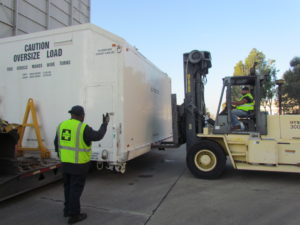 Boeing’s facilities in southern California are outfitted with numerous test chambers that routinely evaluate spacecraft and other vehicles in a variety of environments to make sure they can handle the demands of flight.

Boeing is building the next generation of human space systems in partnership with NASA’s Commercial Crew Program to take astronauts to and from the International Space Station. The Starliner will launch atop an Atlas V rocket from Cape Canaveral Air Force Station in Florida.

The Commercial Crew Program also is partnering with SpaceX to develop its Crew Dragon spacecraft and Falcon 9 rocket for transporting astronauts to and from the orbiting microgravity laboratory.  Photos by Boeing. 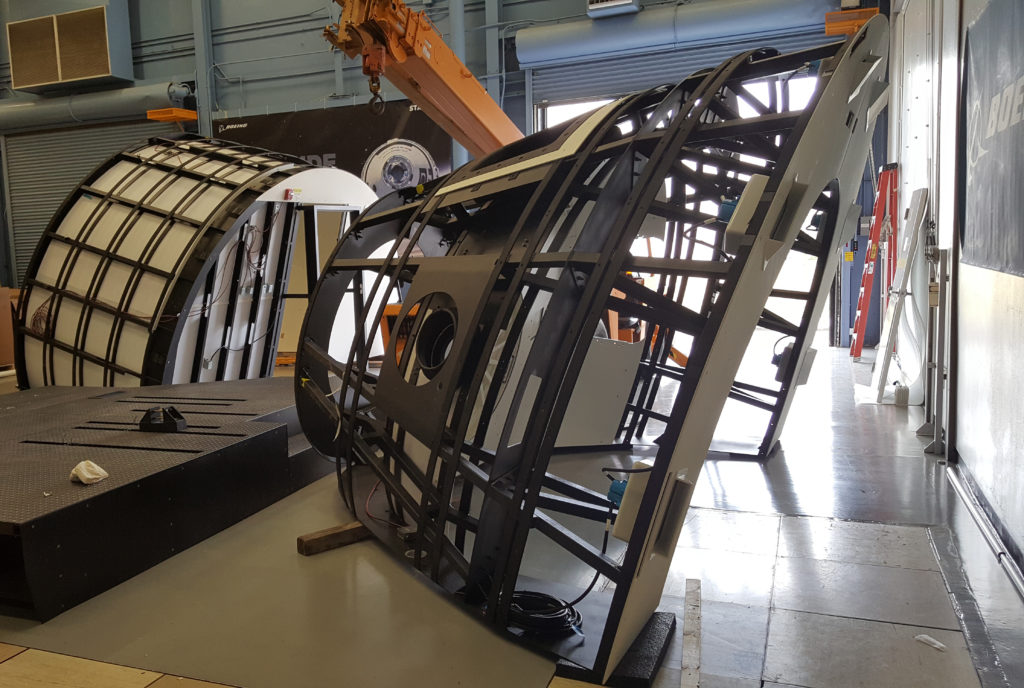 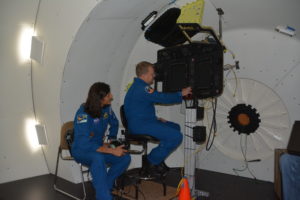 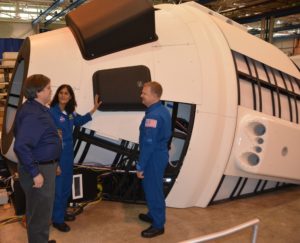 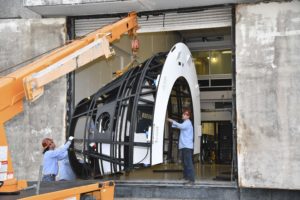 As commercial crew astronauts climb inside Boeing’s CST-100 Starliner spacecraft for the first time atop of a United Launch Alliance Atlas V rocket at Space Launch Complex 41 on Cape Canaveral Air Force Station in Florida, there will be something very familiar about what they are doing.

This is because of a new simulator that arrived today at NASA’s Johnson Space Center in Houston, Texas. The Boeing Mission Simulator is a full-scale mock-up of the Starliner outfitted with the same state-of-the-art interior as the real spacecraft. NASA astronauts Eric Boe and Suni Williams worked with the simulator after its assembly in St. Louis before it was shipped to Texas.

The purpose of the simulator is to allow astronauts to rehearse all aspects of a mission to the International Space Station so the detailed functions they might need to perform will seem as routine as possible. The Starliner is autonomous, but the training tools designed for the spacecraft will allow an astronaut to go beyond the typical mission parameters to train for the unexpected while in a safe environment.

The simulator will join Boeing’s Crew Part-Task Trainers in the Jake Garn Mission Simulator and Training Facility, which were installed in 2016. The part-task trainers simulate specific aspects of a flight whereas the large mission simulator allows the astronaut to be fully immersed in the spaceflight experience from beginning to end. Last year, Boeing also unveiled an entire training facility in Houston call the Space Training, Analysis and Review Facility, or STAR, which will house two other training devices all designed to help astronauts and support teams from Mission Control to astronauts aboard the space station. Together, all training tools will prepare astronauts for variety of situations while in flight.

Boeing is building the Starliner system in collaboration with NASA’s Commercial Crew Program. NASA is partnering with private industry to return human spaceflight to the United States. Boeing is one of two companies that will take astronauts to and from the International Space Station in low-Earth orbit so NASA can focus on deep-space exploration. The public-private partnership brings together industry innovation with NASA’s long history of human spaceflight experience. 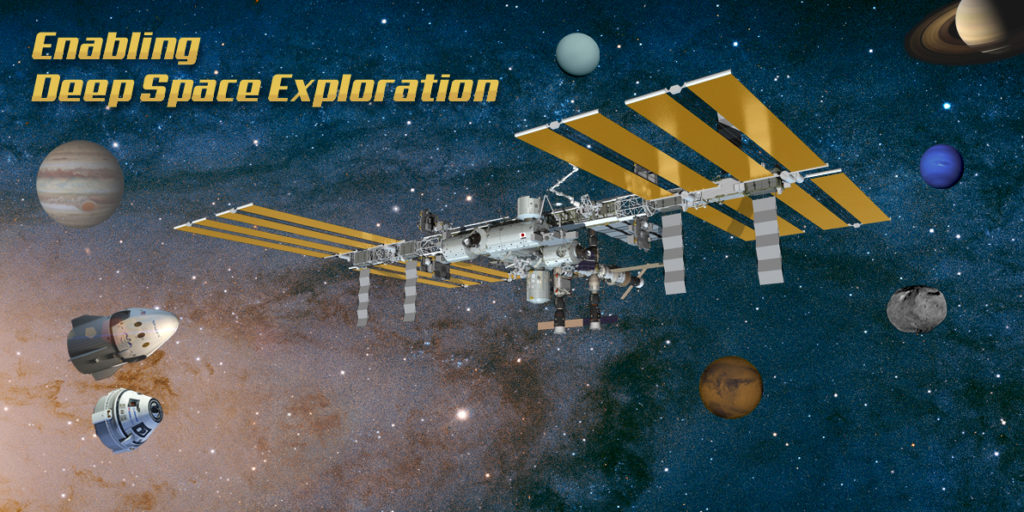 The spacecraft and rocket systems that Boeing and SpaceX are creating in partnership with NASA’s Commercial Crew Program may not land on the surface of Mars. However, they are critical to the agency’s plans to send astronauts to the Red Planet. The systems will provide reliable access to the International Space Station, our test bed. Learn more: http://go.nasa.gov/2iIY0en

NASA’s Commercial Crew Program secured eight crew rotation missions from Boeing and SpaceX – four from each company. The missions will carry astronauts to the International Space Station through 2024. The four additional missions will fly following NASA certification. They fall under the current Commercial Crew Transportation Capability contracts, and bring the total number of crew rotation missions awarded to each provider to six.

The additional flights will allow the commercial partners to plan for all aspects of these missions while fulfilling space station transportation needs. The awards do not include payments at this time.

“Awarding these missions now will provide greater stability for the future space station crew rotation schedule, as well as reduce schedule and financial uncertainty for our providers,” said Phil McAlister, director of NASA’s Commercial Spaceflight Development Division. “The ability to turn on missions as needed to meet the needs of the space station program is an important aspect of the Commercial Crew Program.”

The two commercial spacecraft also will provide a lifeboat capability to allow the astronauts aboard the station to return safely to Earth in an emergency, if necessary.

Returning human launch capabilities to U.S. soil underscores NASA’s commitment to the station and the research that the orbiting laboratory makes possible including the advancement of scientific knowledge off the Earth, for the benefit of those on the Earth and to prepare for future deep space exploration.

The Commercial Crew Program will help NASA get full operational use from the national laboratory for scientific research by increasing the number of astronauts on the space station, and allowing the crew members to dedicate more time to research.

For more details about the missions and the work of the Commercial Crew Program, click here.