NASA led a joint emergency escape and triage simulation with Boeing and United Launch Alliance (ULA) on July 24 at Space Launch Complex 41 on Cape Canaveral Air Force Station (CCAFS) in Florida in preparation for upcoming crew flights to the International Space Station. The exercise ranged from astronauts and support teams quickly escaping the launch pad to emergency personnel practicing rescue and life support procedures focused on the safety of the launch site teams.

In the event of an emergency on launch day, astronauts and support teams would need to exit the launch pad as quickly as possible. The exercise was designed to validate the escape procedures from the crew access tower – the nearly 200-foot-tall structure astronauts will ascend to the same level as the spacecraft on top of the rocket – to a pre-staged medical location a safe distance away from the launch pad. The second half of the rehearsal included the rescue teams that would conduct initial triage for the crew and ground team.

NASA astronauts Josh Cassada, currently in training for the second flight with crew aboard Boeing’s CST-100 Starliner spacecraft, and Eric Boe, along with astronaut candidate Jasmin Moghbeli, served as flight crew for the simulation.

During the exercise, the astronauts and support teams put on portable respirators and made their way to the emergency egress system – a commercial, off-the-shelf zip line modified and constructed as a safety measure for human spaceflight – for escape. The emergency system is on the same level of the crew access tower as the crew access arm, the bridge astronauts walk across to enter the Starliner. The launch teams, secured in seats, descended the tower to the pad perimeter below.

Next, using mine-resistant ambush-protected vehicles, known as MRAPs, the crew members drove just under a mile north to a helipad, where flight surgeons and the emergency medical services teams waited with ambulances and a decontamination vehicle. Astronauts evacuating from a pad emergency may come into contact with hazardous substances, such as fuel from the rocket or spacecraft, and must be decontaminated to allow medical personnel to safely treat them. In a true emergency, anyone injured would then be transported via helicopter to area hospitals.

Personnel from Kennedy Space Center emergency medical services, pad rescue teams and environmental health, along with CCAFS fire and rescue and the U.S. Air Force 45th Space Wing worked in tandem with NASA, Boeing and ULA to whisk the astronauts to safety – and, in the process, test necessary procedures and equipment, while providing new team members valuable experience.

The simulation is one of several NASA has conducted with our commercial crew partners, Boeing and SpaceX, in preparation to launch astronauts from American soil. NASA’s Commercial Crew Program continues to place astronaut safety at the forefront of preparations for human spaceflight.

NASA and our partners want to fly astronauts as quickly as we can without compromising the safety of our astronauts and always will give safety precedence over schedule. However, our schedules matter. The NASA Administrator has directed all programs in the Human Exploration and Operations Directorate to reexamine flight dates once new leadership is in place to deliver realistic schedule plans.

This is a pivotal time for NASA and our partners. The final phase of our development and testing is critical to the safety of our astronauts and the success of our mission – regular, reliable and cost-effective human transportation to and from the International Space Station on commercially-owned and operated American space systems.

We are testing, learning and incorporating changes to improve the design and operation of these next-generation human space transportation systems. As a result, our providers have improved the safety of these systems, and the effect of these changes have impacted schedules.

NASA and SpaceX were nominated for an Emmy! Teams from the agency’s Commercial Crew Program are among six finalists in the Outstanding Interactive Program category for their coverage of SpaceX’s Demo-1 mission in March 2019.

The nomination recognizes the teams’ tremendous efforts in sharing with the world Crew Dragon’s historic journey to the International Space Station. The mission marked the first time a commercially operated spacecraft docked with the space station, and brought the United States a critical step closer to launching astronauts in American spacecraft on American rockets from American soil.

NASA and SpaceX spent years preparing a collaborative approach to mission coverage, which featured multiple live broadcasts from agency and company facilities across the country during each phase of the mission, continuing through Crew Dragon’s stunning return to Earth. Throughout NASA’s coverage, the agency engaged social media users around the world and at local social media influencer gatherings at the agency’s Kennedy Space Center in Florida. 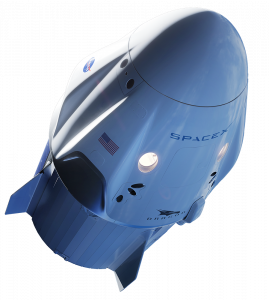 SpaceX held a joint teleconference with NASA on Monday, July 15, to update media on the company’s investigation into its Crew Dragon static fire mishap on Saturday, April 20. SpaceX’s full statement on the investigation and the current findings can be found at: https://go.nasa.gov/2GeGLyH

A new International Docking Adapter, called IDA-3, is scheduled to arrive at the International Space Station this July aboard SpaceX’s 18th cargo resupply mission to the microgravity laboratory. When installed on the space station, the one-of-a-kind outpost will have two common ports enabling expanded opportunities for visiting vehicles, including new spacecraft designed to carry humans for NASA’s Commercial Crew Program.

The docking adapters are the physical connections spacecraft like Boeing’s CST-100 Starliner, SpaceX’s Crew Dragon and future, yet-to-be designed international spacecraft will use to autonomously attach to station. The adapters are important because the plans are readily available for spacecraft builders and standardize a host of docking requirements.

Currently stowed in the trunk of SpaceX’s Dragon cargo spacecraft, the IDA-3 was assembled at NASA’s Kennedy Space Center in Florida, and comprises of a number of sensors that spacecraft will communicate with and connect to through use of onboard computers and navigation systems.  Docking requires no crew assistance and can be completed much more quickly than the berthing process often used for cargo spacecraft today, which may involve astronauts aboard the station manually capturing spacecraft using a robotic arm then maneuvering the craft to attach to a common hatch mechanism.

IDA-3 is one of the primary payloads on the SpaceX resupply mission and is identical to the International Docking Adapter-2, IDA-2, installed in the summer of 2016. IDA-2 was used by SpaceX during the company’s first uncrewed flight test, called Demo-1, for commercial crew. Both docking adapters were built by Boeing.

Once at the space station, flight controllers will use the station’s Canadarm2 robotic arm to remove the IDA-3 from Dragon’s trunk and place it over a Pressurized Mating Adapter (PMA-3) on the station’s Harmony module, or Node 2. Later this summer, two Expedition 60 crew members will perform a spacewalk to permanently install the IDA-3 to PMA-3.

The SpaceX CRS-18 mission is scheduled to launch at 7:35 p.m. EDT on Sunday, July 21, from Space Launch Complex 40 at Cape Canaveral Air Force Station. After its arrival, the Dragon cargo spacecraft will remain at the space station for about a month.

NASA and SpaceX practiced Crew Dragon rendezvous and docking to the International Space Station during a virtual dress rehearsal on June 26 for the company’s first crew flight test, known as Demo-2, to the microgravity laboratory.

The activity is part of a series of integrated simulations bringing together NASA and SpaceX flight control teams to complete multiple practice runs for each dynamic phase of a mission from launch to splashdown. These simulations provide the teams plenty of practice to ensure they safely and successfully perform the planned operations of the actual spaceflight, with opportunities to fine-tune their procedures and gain experience on how to solve problems should they arise.

Astronauts Bob Behnken and Doug Hurley are assigned to take the first flight on SpaceX’s Demo-2 mission, and the two have been working closely with SpaceX throughout the design and construction of the spacecraft, offering up the experience they gained on previous spaceflights. Joint simulations bring them together with the teams that will support them from the ground to practice for the mission — including handling any challenges that might arise during flight.

The Demo-2 flight test will be the Crew Dragon’s chance to demonstrate a complete mission with astronauts, from launch to landing, and will put SpaceX on its way to earning certification from NASA’s Commercial Crew Program. Once the spacecraft is certified, SpaceX can begin regular flights to the space station with long-duration crews aboard.

In March, SpaceX’s Demo-1 mission proved the Crew Dragon and its Falcon 9 rocket worked as designed. The mission tested a new launch configuration, checked maneuverability demonstrations in free flight and ensured the crew’s ability to transfer power and data between the spacecraft and the space station. With those boxes all successfully checked, the Crew Dragon became the first commercial spacecraft built to carry humans to dock with the space station. Its subsequent safe reentry and splashdown in the Atlantic Ocean was an important step toward proving the spacecraft is ready to carry humans onboard.