NASA astronaut Jasmin Moghbeli and ESA astronaut Andreas Mogensen will serve as spacecraft commander and pilot, respectively, for the mission. Two mission specialists will be announced later, following review by NASA and its international partners.

The mission is expected to launch no earlier than 2023 on a SpaceX Falcon 9 rocket from Launch Complex 39A at NASA’s Kennedy Space Center in Florida. Moghbeli, Mogensen, and the additional mission specialists will join an expedition crew aboard the space station.

This will be the first spaceflight for Moghbeli, who became a NASA astronaut in 2017. Moghbeli is from Baldwin, New York, and earned a bachelor’s degree in aerospace engineering from the Massachusetts Institute of Technology in Cambridge, Massachusetts, and a master’s degree in aerospace engineering from the Naval Postgraduate School in Monterey, California. As an AH-1W Super Cobra pilot and Marine Corps test pilot, she has flown more than 150 missions accruing 2,000 hours of flight time in more than 25 different aircraft. She also graduated with honors from the U.S. Naval Test Pilot School in Patuxent River, Maryland. At the time of her selection as an astronaut, Moghbeli was testing H-1 helicopters and serving as the quality assurance and avionics officer for VMX-1. She is also the proud mom of twin girls.

This will be Mogensen’s second trip to the space station as a veteran of the ESA 10-day Iriss mission in 2015, for which he served as a flight engineer. Mogensen was the flight engineer on Soyuz TMA-18M spacecraft during launch and Soyuz TMA-16M during the return flight. Mogensen has logged 9 days, 20 hours, and 9 minutes in space. He was born in Copenhagen, Denmark, and graduated with an international baccalaureate from the Copenhagen International School, a master’s degree in aeronautical engineering from Imperial College London, and a doctorate in aerospace engineering from the University of Texas at Austin. In 2015, Mogensen became the first Danish person to go to space and currently is serving as the European astronaut liaison officer to NASA’s Johnson Space Center in Houston.

NASA’s Commercial Crew Program works with the U.S. aerospace industry to provide safe, reliable, and cost-effective transportation to and from the International Space Station on American-made rockets and spacecraft launching from American soil.

For more than 21 years, humans have lived and worked continuously aboard the International Space Station, advancing scientific knowledge and demonstrating new technologies, making research breakthroughs not possible on Earth. As a global endeavor, 253 people from 19 countries have visited the unique microgravity laboratory that has hosted more than 3,000 research and educational investigations from researchers in 109 countries and areas.

The station is a critical testbed for NASA to understand and overcome the challenges of long-duration spaceflight and to expand commercial opportunities in low-Earth orbit. As commercial companies focus on providing human space transportation services and developing a robust low-Earth orbit economy, NASA is free to focus on building spacecraft and rockets for deep space missions to the Moon and Mars. 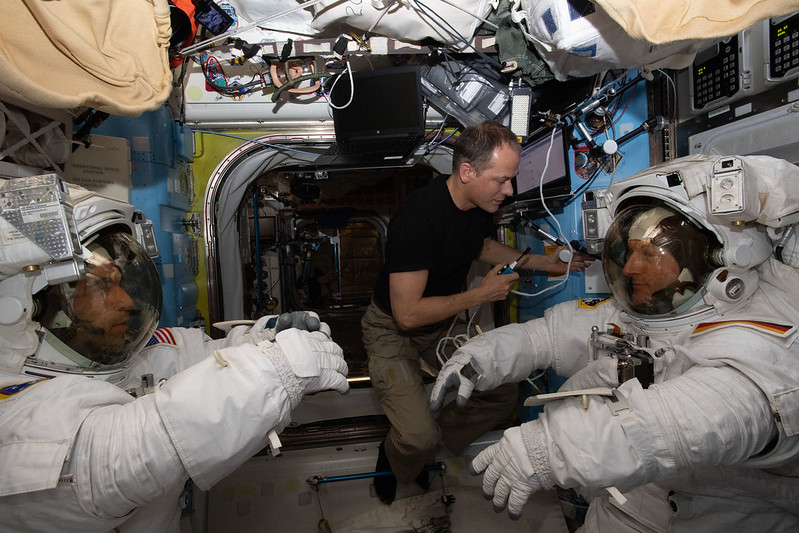 Two astronauts are getting ready for a spacewalk set to begin on Wednesday at 8:50 a.m. EDT. NASA astronaut Raja Chari and ESA (European Space Agency) astronaut Matthias Maurer will spend about six-and-a-half hours installing new thermal system and electronics components on the station’s U.S. segment. The duo spent Monday organizing their spacewalk tools and attaching checklists to their U.S. spacesuit cuffs. NASA TV will begin its live spacewalk coverage at 7:30 a.m. on Wednesday.

NASA astronaut Tom Marshburn spent the day on a variety of orbital plumbing and life support maintenance tasks. He also joined Chari for a conference with mission controllers as they plan to return to Earth with Barron and Maurer aboard the SpaceX Crew Dragon Endurance next month. 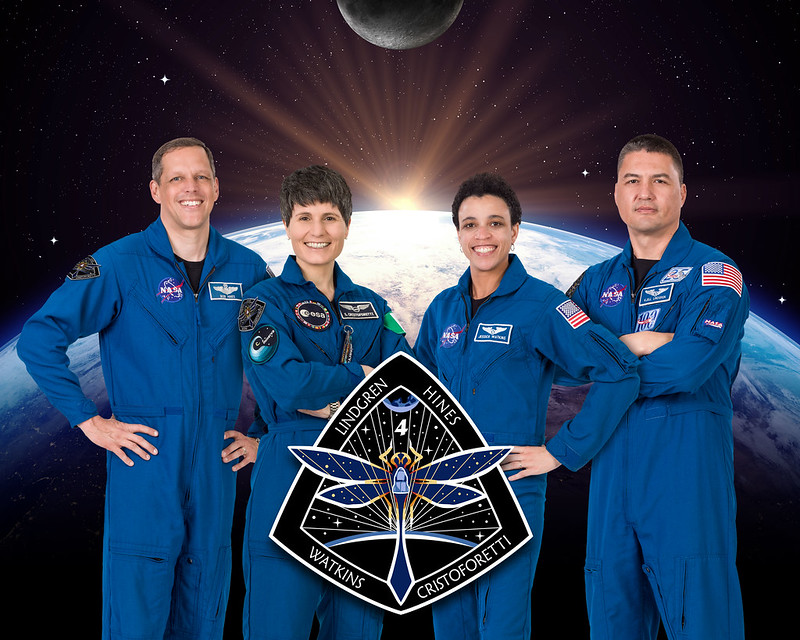 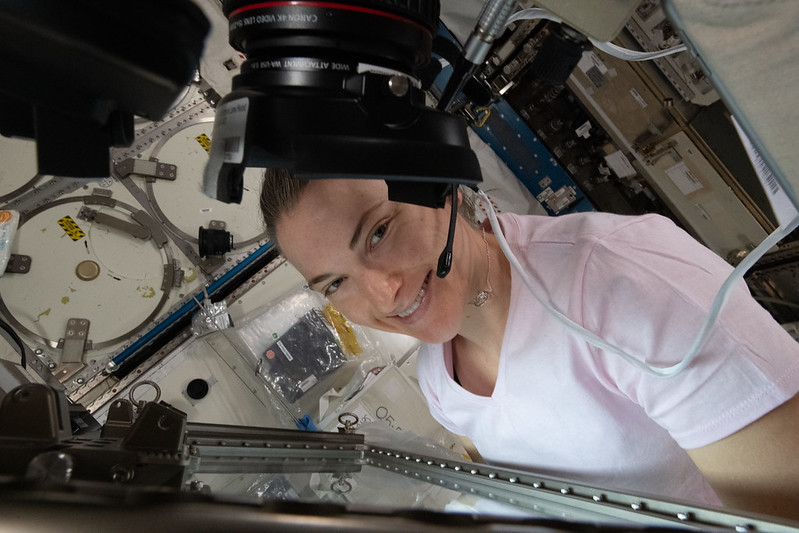 Flight Engineers Kayla Barron and Raja Chari worked throughout Friday, March 11, preparing for a six-and-a-half hour spacewalk scheduled for 8:05 a.m. EDT on Tuesday, March 15. Barron and Chari checked out spacesuit emergency jet packs and other suit components including lights, cameras, and data recorders. They also configured a host of tools inside the U.S. Quest airlock they will use during their external maintenance job. The pair on Tuesday will install modification kits on the Starboard-4 truss structure that will ready the space station for its third roll-out solar array. NASA TV begins its live spacewalk broadcast on Tuesday at 6:30 a.m.

NASA Flight Engineers Kayla Barron and Raja Chari will conduct the Tuesday, March 15, spacewalk, designated U.S. EVA 79, assembling and installing modification kits required for upcoming solar array upgrades. The pair will install brackets and struts to support the future installation of an ISS Roll-Out Solar Array (iROSA). So far, two of six iROSAs have been deployed on station with four additional arrays to be delivered. The arrays will ultimately augment six of the station’s eight power channels, increasing the station’s total available power from 160 kilowatts to up to 215 kilowatts.

For the Wednesday, March 23, spacewalk, designated U.S. EVA 80, two astronauts will install hoses on a Radiator Beam Valve Module that routes ammonia through the station’s heat-rejecting radiators to keep systems at the proper temperature. The crew members will also install a power and data cable on the Columbus module’s Bartolomeo science platform, replace an external camera on the station’s truss, and conduct other upgrades to station hardware.

Astronaut roles for the Wednesday, March 23, spacewalk will be confirmed after the first spacewalk is completed.

For more information about the International Space Station, its research, and crew, visit: https://www.nasa.gov/station. 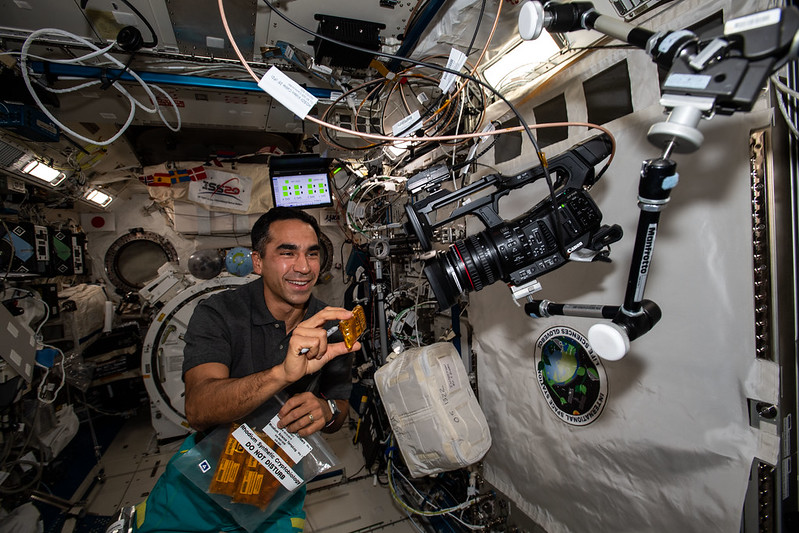 NASA astronaut Raja Chari works on a biotechnology study that may advance technologies for use in space and in extreme environments on Earth.

On March 8, three astronauts worked throughout the day continuing to research how living in space affects eye structure and visual function. NASA Flight Engineers Raja Chari and Kayla Barron were assisted by ESA (European Space Agency) astronaut Matthias Maurer in the Kibo laboratory module to help doctors understand why some astronauts have reported vision issues in microgravity and after returning to Earth. Results may help doctors develop treatments for eye conditions experienced by astronauts and Earthlings.

Meanwhile, NASA Flight Engineer Tom Marshburn spent the day working in the Tranquility module servicing the COLBERT treadmill. He started with a visual inspection before aligning components on the exercise device to ensure it remained centered inside Tranquility. COLBERT was delivered to the orbital lab over 12 years ago aboard space shuttle Discovery.

NASA’s SpaceX Crew-4 team – consisting of NASA astronauts Kjell Lindgren, Bob Hines, Jessica Watkins, and ESA (European Space Agency) astronaut Samantha Cristoforetti – have been busy getting ready for their upcoming mission to the International Space Station. The mission is scheduled to launch Friday, April 15, from Launch Complex 39A at the agency’s Kennedy Space Center in Florida.

During recent training at SpaceX headquarters in Hawthorne, California, the crew participated in simulations focused on undocking and departing from the space station. All four astronauts practiced in a high-fidelity simulator of SpaceX’s Dragon capsule, complete with flight-realistic hardware, displays, and seats. Each astronaut gained experience suiting up and configuring the spacecraft for departure. Commander Lindgren and pilot Hines took their places in the center seats, with access to flight displays they’ll use to monitor the spacecraft’s status and, if needed, take manual control of the spacecraft.

Astronaut crews regularly train for all phases of flight, using simulations to practice normal operations and respond to any unexpected issues. These simulations typically include multiple “runs” for a given day, with crew and flight controllers practicing a specific phase of the mission. Using simulated data to train personnel, simulations introduce system failures and other challenges to give teams the opportunity to prepare for and understand potential anomalies that could arise during a spaceflight, all while arming the crew with the skills needed for effectively overcoming these challenges.

While at Kennedy Space Center for emergency preparedness training, the crew visited the launch tower at Launch Complex 39A and trained on the emergency egress system, which employs slide wire baskets that enable crew and personnel to safely and quickly evacuate from the launch tower in the event of an emergency.

To become more familiar with recovery operations, the astronauts found their sea legs aboard SpaceX’s Dragon recovery vessels that will be used by joint SpaceX and NASA teams to pick up the crew following splashdown at the end of their mission. Two identical vessels cover potential landing zones off of the coast of Florida. The astronauts also toured one of SpaceX’s hangars where Falcon 9 rockets are refurbished and prepared for flight.

The crew is scheduled for a science expedition aboard the International Space Station, living and working as part of orbiting laboratory’s Expeditions 67 and 68. Crew-4 will be the fourth crew rotation mission with SpaceX, and fifth crewed flight overall including the Demo-2 flight test, for NASA’s Commercial Crew Program.

Media accreditation is now open for SpaceX’s fourth commercial crew mission for NASA to the International Space Station. The earliest targeted launch date for the agency’s SpaceX Crew-4 mission is Friday, April 15, from Launch Complex 39A at NASA’s Kennedy Space Center in Florida.

For a link to the full media advisory, click here.