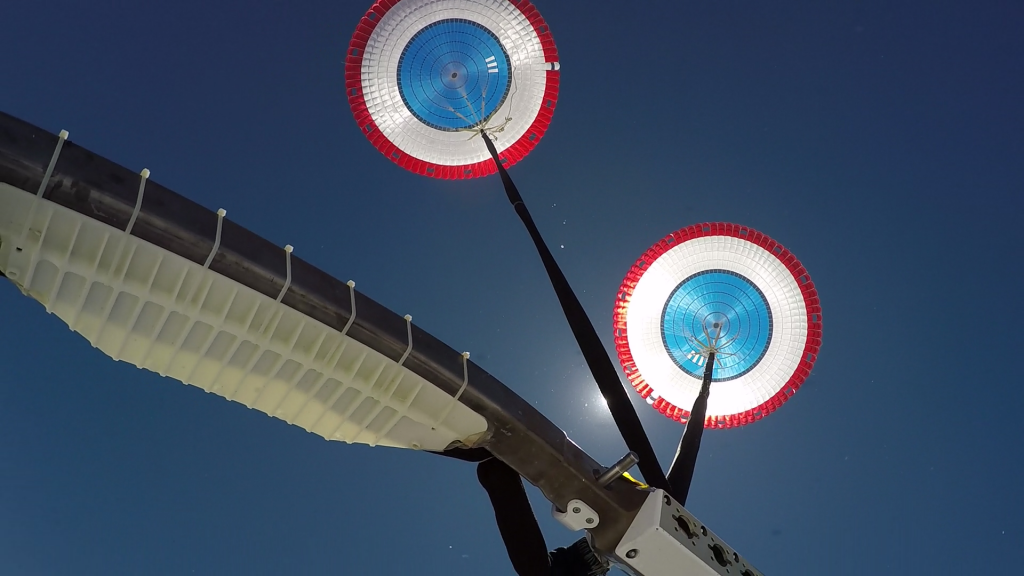 NASA and Boeing completed two different tests of the CST-100 Starliner parachute system this week at two different locations in the desert of the western United States. The tests were part of a series of parachute tests providing valuable data needed to prove the system is safe to carry astronauts to and from the International Space Station as part of NASA’s Commercial Crew Program.

The first test, conducted June 24 at the U.S. Army’s White Sands Missile Range in New Mexico, used a full-scale Starliner test article, known as a boiler plate, designed to simulate the actual spacecraft. This test featured a double failure scenario meaning one of the parachute system’s two drogue parachutes and one of the three main parachutes were both intentionally disabled to test how the remaining parachutes handled the additional loads during deployment and descent.

The next test occurred June 26 using a dart-shaped test device meant to function as a Starliner weight simulant. The device was released from a C-17 aircraft above the U.S. Army’s Yuma Proving Ground in Arizona.  This was a “high Q” test, meaning the parachutes were intentionally inflated at higher pressures than they are expected to see during missions.

In both instances, the Starliner test articles landed safely, and the joint NASA and Boeing teams currently are reviewing the new data.

Boeing is targeting an uncrewed Orbital Flight Test to the space station this summer, which will test the full end-to-end capabilities of the system from launch to landing. The uncrewed test will be follow by its Crew Flight Test to the space station. Starliner will launch atop a United Launch Alliance Atlas V rocket from Space Launch Complex 41 at Cape Canaveral Air Force Station in Florida.

The booster stage and the Dual Engine Centaur upper stage of the Atlas V rocket, designated AV-082, arrived on ULA’s Mariner cargo ship from the company’s facility in Decatur, Alabama.

The Atlas V rocket now located in the company’s Atlas Spaceflight Operations Center at Cape Canaveral will undergo receiving checks and await the start of operations for its mission. The CFT mission will take NASA astronauts Mike Fincke and Nicole Mann, and Boeing astronaut Chris Ferguson to the station to demonstrate Starliner and Atlas V’s ability to safely carry crew to and from the orbiting laboratory.

CFT will be the second Starliner flight following the uncrewed Orbital Flight Test (OFT) that is targeted to launch to the station in August. The rocket for OFT, called AV-080, was brought to the Cape last year.

Both flights are key elements of NASA’s Commercial Crew Program that will return the nation’s capability to launch astronauts into orbit on American rockets and spacecraft from U.S. soil. Regular commercial transportation using Boeing’s Starliner and SpaceX’s Crew Dragon spacecraft to and from the space station will enable the addition of another crew member, expanded station use, and additional research time aboard the orbiting laboratory. This time will help address the challenges of moving humanity toward the Moon and Mars as we learn how to keep astronauts healthy during long-duration space travel and demonstrate technologies for human and robotic exploration beyond low-Earth orbit, to the Moon and Mars.