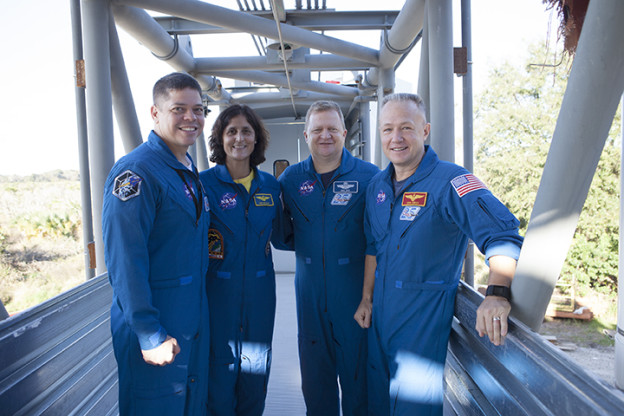 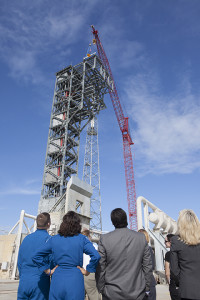 Four astronauts training for test flights with NASA’s Commercial Crew program joined the festivities at Space Launch Complex 41 Thursday morning as one of the highest steel beams was placed on the Crew Access Tower during a “topping off” ceremony with United Launch Alliance, Boeing and Hensel Phelps at the Cape Canaveral Air Force Station launch site in Florida.

“It’s really an honor to get down here. We’re humbled to be a part of launching rockets for the United States again,” said Doug Hurley, a veteran of space shuttle missions and one of the four chosen to work closely with partners of NASA’s Commercial Crew Program during development, testing and training. Bob Behnken, Eric Boe and Suni Williams were also selected and took part in the employee-focused event. 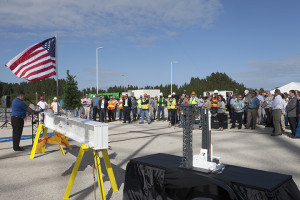 “It’s amazing how many people it takes to get us into space,” Boe said. 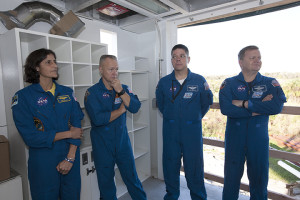 A large crowd of employees from numerous companies gathered mid-morning to sign the 650-pound beam and watch a crane lift it into place atop the 200-foot-tall Crew Access Tower constructed over the past year. It was built in segments complete with stairs, cable trays and other fittings a few miles from the launch pad, then those segments were stacked on top of each other to form the tower. The Crew Access Arm and White Room the astronauts looked over today will be attached to the tower after several months’ of testing and fit checks. 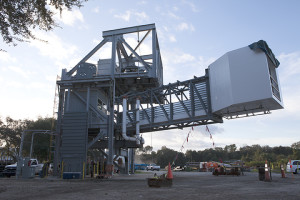 Employees were asked to sign the beam before it was lifted into place and welded to the top of the tower.

“Today you are part of history,” said Kathy Lueders, program manager of NASA’s Commercial Crew Program. “Stop and enjoy this moment. I hope everyone has been able to write their name on the beam because you are part of the critical safety network that is making this all possible.”

Prior to the ceremony at SLC-41, the astronauts toured the White Room and Crew Access Arm undergoing testing at a construction yard near Kennedy Space Center. The White Room will be the stepping off point to space for astronauts as they board a Boeing CST-100 Starliner for liftoff on a ULA Atlas V rocket. Designed as a clean area to keep contaminants out of the spacecraft and off the astronauts’ suits, white rooms are the place where technicians make last-minute additions to the spacesuit and make sure everything is ready to flight as the flight crew climbs inside for launch. White rooms have always been a part of NASA’s human spaceflight efforts, from Mercury to Gemini and Apollo to the space shuttle.

“This is the last thing that whoever flies the Starliner is going to see before they go into space,” Hurley told the workers who built the structures.

Boeing and SpaceX are developing a new generation of spacecraft to carry astronauts to the International Space Station beginning in 2017. Both companies are also deep into construction and modification of launch facilities at NASA’s Kennedy Space Center in Florida to safely host astronaut crews as they launch from American soil for the first time since 2011. Designs for launch facilities have been confirmed through NASA panels and in-depth examinations.

For Boeing, launching from SLC-41 meant building the Crew Access Tower, the first crew-focused structure at Cape Canaveral since Apollo 7. SpaceX is modifying historic Launch Pad 39A for its commercial crew missions on the Crew Dragon spacecraft launching on its Falcon 9 rockets. It also will have a White Room tailored to its designs that will offer astronauts and ground crew safety as they board and a way to leave the spacecraft in a hurry before launch in the unlikely event of an emergency. Photo credits: NASA/Kim Shiflett