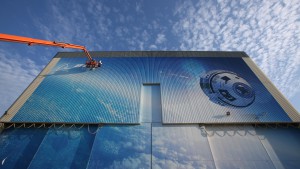 One thought on “Boeing Wraps Up C3PF Mural Work”