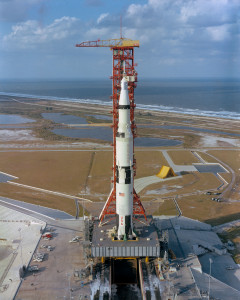 The Apollo spacecraft launched on the first all-up test flight of the Saturn V 48 years ago today to confirm launch loads and dynamic characteristics of the systems that would carry astronauts to the surface of the moon. The flight proved aspects of the Apollo heat shield and re-entry operations.

Two years from now, at the 50th anniversary of that unpiloted Apollo 4 mission, as part of NASA’s Commercial Crew Program, Boeing’s CST-100 Starliner and the SpaceX Crew Dragon spacecraft will have undergone unpiloted flight tests to confirm their designs.