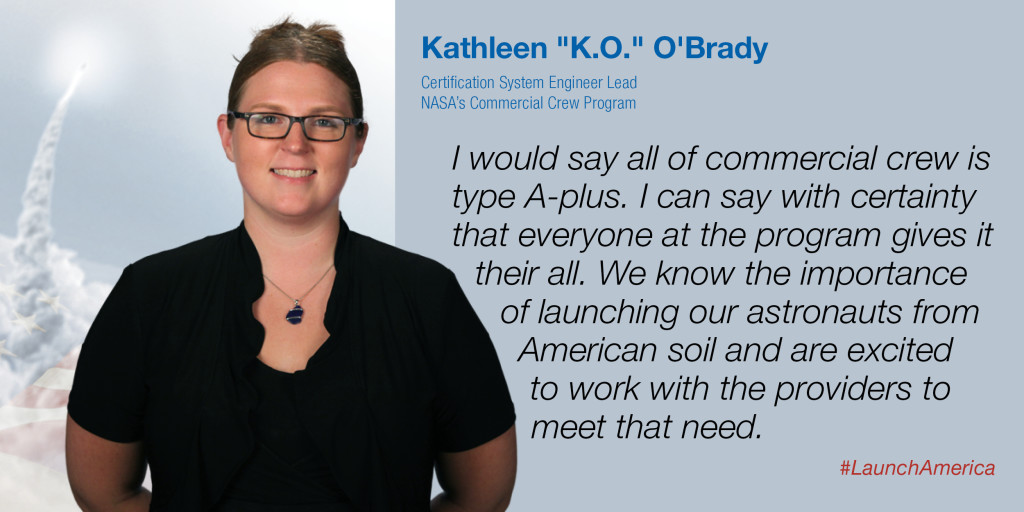 Kathleen O’Brady provided an engineering perspective to the group of spaceflight experts laying out requirements for the next spacecraft that will take astronauts to the International Space Station from American soil. O’Brady began her time with commercial crew working on contract source evaluation boards – the committees of specialized engineers, government officers and lawyers that develop contract requirements, analyze proposals and present the findings to the person who makes the final decision. The boards are small groups that work in secluded rooms by themselves for months at a time, often arriving before the sun rises and leaving long after it’s gone down.

The work performed by the source boards has been vital to NASA in achieving the goals of commercial crew, which is ultimately to turn over human missions to low-Earth orbit to private companies so NASA can focus its research and development resources on its journey to Mars, including human deep space exploration. NASA’s partnerships with private aerospace industry, were established through the Space Act Agreements and contracts that stem from panels or source boards.

The final board O’Brady worked on ultimately led to the award of contracts to Boeing and SpaceX to build the spacecraft and launch systems that will return human launch capability to American soil. Each company works independently on different systems – Boeing is building the CST-100 Starliner to launch on a United Launch Alliance Atlas V rocket and SpaceX is building the Crew Dragon to launch on a Falcon 9 rocket. Both work closely with NASA to build systems that meet NASA’s safety and performance requirements.  One goal of this unique approach is to acquire cost-effective transportation services from providers that own and maintain the spacecraft systems themselves. The companies also expect to offer orbital flights for non-NASA customers in the future.

“It’s definitely different than a traditional program where we own the hardware,” O’Brady said, noting that for the space shuttle, Apollo and its predecessors the space agency owned the hardware, designs, and more of the processes used in building and maintaining the vehicles. Read O’Brady’s full story at http://go.nasa.gov/28TiRee