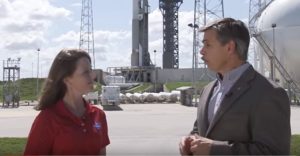 NASA’s Jon Cowart, a veteran space engineer going back to the space shuttle and other systems, offered a rundown of the agency’s Commercial Crew Program during Thursday’s launch broadcast ahead of the start of the OSIRIS-REx mission. In addition to a status update on the work under way by Boeing and SpaceX to build spacecraft and launch systems to take astronauts to the International Space Station, Cowart offered the role Commercial Crew plays in NASA’s overall goals of exploration.

“The benefits (of Commercial Crew) are fantastic,” Cowart explained. “The Journey to Mars is going to take a dedicated team and that dedicated team can now focus on that task. They don’t have to worry about getting stuff to low-Earth orbit, which is where Commercial Crew comes in. We are going to enable that capability and free those folks up to worry about deep space and we are going to worry about getting things to low-Earth orbit using SpaceX and Boeing. This allows the money to be spent more on the deep space stuff, which we care deeply about. We all want to get to Mars at some point! So, that is the real thing, it frees up some money and also allows a dedicated team to go do that very important work.”