NASA and Boeing recently completed a full start to finish integrated mission dress rehearsal for the company’s CST-100 Starliner flight with astronauts to the International Space Station, which is scheduled to launch in April 2023.

During several days at Boeing’s Avionics and Software Integration Lab (ASIL) in Houston, the ASIL Mission Rehearsal (AMR) combined tests of software and crew systems, along with operations teams. The completion of the end-to-end mission rehearsal clears a path for the next CFT milestones, including working with the crew and flight controllers on various integrated failure scenarios and a series of flight-day parameter updates that will become available as the team nears launch day.

“Testing is a key component to the success of a human space program,” said NASA Commercial Crew Program Software Certification Manager Chad Schaeffer. “The AMR and the integrated failure scenarios are excellent examples of the rigorous testing teams are performing on Starliner. The rehearsal went well and reflects the continued improvement in executing this test and helps pave the way to the much anticipated first crewed flight.”

The crew members worked in a flight deck simulator networked to control rooms and avionics, operating the same software that will be used during CFT. They effectively demonstrated the software is ready to operate Starliner during prelaunch, launch, docking to the space station, undocking, and the return to Earth through landing.

“We began conducting AMRs with the creation of OFT-2, and the integrated team has continued to get more efficient with each rehearsal,” said Aaron Kraftcheck, Starliner avionics software integration and test manager. “With the participation of our astronauts in this CFT AMR, we have enhanced the team dynamics, and continued to learn and adjust, which is what AMR is all about.”

NASA and Boeing teams continue to conduct training and testing ahead of the Boeing Crew Flight Test (CFT), scheduled to launch in April 2023 to the International Space Station for the agency’s Commercial Crew Program.

Prior to that, the astronauts participated in a crew validation test in October to evaluate and fine tune operations. These tests provide astronauts with hands-on training while giving the launch pad crew further experience with crucial tasks. In addition, teams can address issues encountered during previous checks and identify items that still need to be resolved prior to launch.

During the exercise, the astronauts suited up and tested the pressurized crew module to assess seat fit, suit functionality, cabin temperature, audio, and day of launch operations. The teams cycled through different environmental control configurations and flow rates, including oxygen and emergency gas, so the crew will be accustomed to a variety of scenarios on orbit. The astronauts also familiarized themselves with camera, tablet, and wireless application set-up. Communication checks went well between the Mission Control Center and the crew in the spacecraft.

Overall, the training activities gave the astronauts and support teams confidence in operations and built their knowledge base for subsequent flight preparation activities.

“Preparing for this flight doesn’t feel like traditional training that Suni and I went through for missions on the space shuttle or Soyuz,” Wilmore said. “We’re thoroughly embedded in all aspects of developing a brand-new spacecraft, making this more akin to an experimental process. The entire team is learning how to plan, train, and fly Starliner into space.”

Following a successful CFT mission, NASA will begin the final process of certifying the Starliner spacecraft and systems for crew missions to the space station. Regular, long-duration commercial crew rotation missions enable NASA to continue the research and technology investigations taking place aboard the orbiting laboratory. Such research benefits people on Earth and lays the groundwork for future exploration of the Moon and Mars, starting with the agency’s Artemis missions, which include landing the first woman and first person of color on the lunar surface.

Find out more about NASA’s Commercial Crew Program at: https://www.nasa.gov/commercialcrew.

Boeing’s CST-100 Starliner spacecraft is safely in orbit heading for the International Space Station following launch of the next-generation spacecraft on a United Launch Alliance (ULA) Atlas V rocket on a mission designed to test the end-to-end capabilities of the crew-capable system.

The Starliner spacecraft is scheduled to dock to the space station at 7:10 p.m. on Friday, May 20. The spacecraft is carrying more than 500 pounds of NASA cargo and crew supplies to the space station and returns to Earth with nearly 600 pounds of cargo, including reusable Nitrogen Oxygen Recharge System (NORS) tanks that provide breathable air to station crew members.

NASA’s Boeing OFT-2 television coverage returns on Friday, May 20 and Saturday, May 21 and will air live on NASA Television, the NASA app, and the agency’s website.

All times are subject to change based on mission operations (all times Eastern):

For updates throughout the test, tune in to the space station blog at https://blogs.nasa.gov/spacestation/.

Boeing’s CST-100 Starliner has separated from the Atlas V Centaur and is flying on its own, embarking on its flight to the International Space Station. After a series of orbital adjustments, Starliner will be on course for rendezvous and docking with the space station at 7:10 p.m. on Friday, May 20.

About one minute after launch, the Atlas V rocket achieved Mach 1. About two-and-a-half minutes into flight, a series of key events will begin to occur over the next few minutes. The Atlas V solid rocket boosters will fall away. The Atlas first-stage booster engine will cut off, followed by separation from the dual-engine Centaur second stage. The Centaur first main engine will start, followed by aeroskirt jettison. A few minutes later the Centaur engine will cut off.

Launch conductors have completed their polls of the launch teams. The T-4 minute built-in hold has been released and the countdown has resumed. The Starliner spacecraft has been configured for terminal count. Three seconds before launch, the Atlas V booster’s RD-180 engine will ignite. 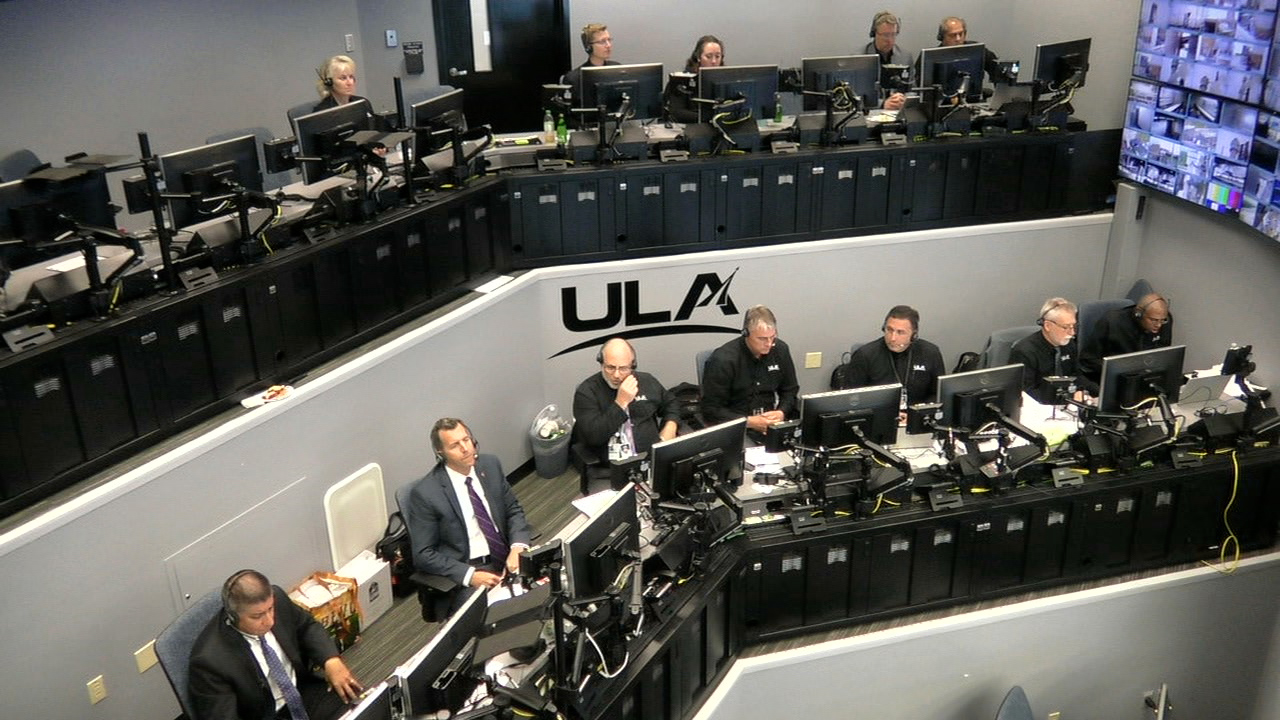 The United Launch Alliance launch conductor is performing his poll of the launch team to determine a “Go” for launch of the Atlas V rocket.

The Boeing launch conductor is polling the launch team to determine a “Go” for launch of the Boeing’s CST-100 Starliner. The launch team is monitoring data feeds, looking for any anomalies.

The launch conductor has started a terminal count briefing with the launch team. There are three control rooms: the United Launch Alliance’s Atlas Spaceflight Operations Center on the Cape Canaveral Space Force Station; the Boeing Mission Control Center at Kennedy Space Center; and the Space Station Control Room at Johnson Space Center in Houston. NASA’s Emergency Operations Center also is activated, and United Launch Alliance has teams in Denver who will monitor ascent of the rocket.

Though no crew will be onboard the spacecraft for NASA’s Boeing Orbital Flight Test-2, the Starliner commander’s seat will be occupied by Rosie the Rocketeer, Boeing’s anthropometric test device. During OFT-1, Rosie was outfitted with 15 sensors to collect data on what astronauts will experience during flights on Starliner. For OFT-2, spacecraft data capture ports previously connected to Rosie’s 15 sensors will be used to collect data from sensors placed along the seat pallet, which is the infrastructure that holds all the crew seats in place.